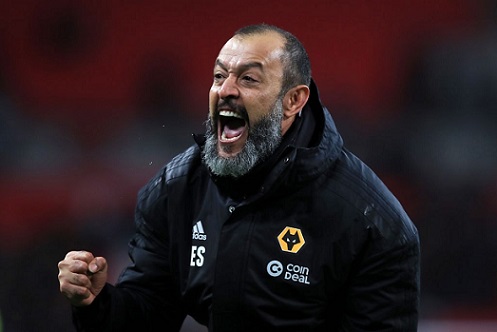 As most of Europe’s domestic leagues take a well-earned break in the post Christmas period, England’s Premier League and Italy’s Serie A continue to plough through a gruelling schedule, and the Portuguese Abroad contingent continue to have a big hand in making the headlines.

The Premier League has seen plenty of surprise results during the festive time of the year, and the most recent saw Nuno Espírito Santo’s Wolves score three late goals – the last through Hélder Costa – to earn a sensational victory over Tottenham at Wembley. Meanwhile it was business as usual for Ronaldo in Italy as the Portugal captain got both goals in Juventus’ win over Sampdoria.

For Wolves, the win over high-flying Tottenham in the capital is arguably the biggest result of their season so far. Nuno selected three Portuguese in his starting line-up, with Ivan Cavaleiro afforded a rare start after impressive recent substitute appearances, while Rúben Neves took his place in central midfield and Rui Patrício kept goal for the visitors.

Wolves trailed for much of the game to Harry Kane’s brilliant long-range finish on 22 minutes, and Nuno started to make his changes around the hour mark, with Hélder Costa replacing Adama Traore and João Moutinho coming on for Leander Dendoncker ten minutes later. Diogo Jota was unavailable for the match due to a hamstring injury.

Wolves grew stronger as the game neared the latter stages and were level when Moutinho’s corner was headed in by French defender Willy Boly. Tottenham reapplied pressure in search of a winner, but Wolves stunned Wembley by taking the lead on 83 minutes as Moutinho’s perfect switch pass found Cavaleiro, who laid the ball off to Mexican striker Raul Jimenez to finish off a classy move.

Nuno removed Cavaleiro with his last change and Wolves made light work of seeing out the latter stages by adding a third goal three minutes before the end of normal time. This time Rúben Neves intercepted a loose ball in midfield and played the ball out to rampaging right wing-back Matt Doherty, who found the run of Hélder Costa and the former Benfica winger calmly prodded the ball past Hugo Lloris to cap an amazing second-half performance.

“This kind of result is good, but I think more important for us was the performance and how we played at the home of football in Wembley,” said a delighted Nuno. “We are leaving here proud of what we have done.

“We played a very good game in the second half, but even in the first half we were organised. Tottenham have a lot of qualities, they have talent, they have ability which creates a lot of problems, so we had to stay with them, stay balanced. 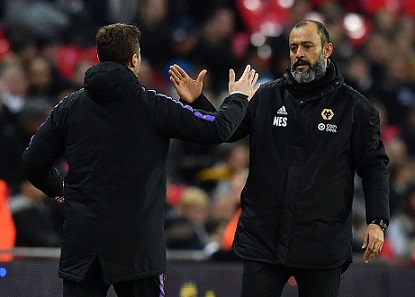 “[In the second half] we had possession, we had chances, we had goals, and the boys worked very hard, were very organised against a very good Tottenham side.

“We had a lot of belief after the equaliser, but we cannot rely [on one goal], we want more, we want to improve, I would have said a draw was a good result, but I cannot control the emotions of the boys if they see space in front of them.”

Before the match, Nuno was praised by Spurs coach Mauricio Pochettino for the work he has done with the promoted side. The Portuguese boss explained that the pair have a strong relationship dating back a few years, while also giving his assessment on Wolves’ progress during his time at the helm.

“Between my work in Valencia and Porto, I spent one day with Mauricio and the staffing coach,” he said. “It was to spend a day, like many other managers do, talking, sharing ideas, speaking freely, open minded.

“It was a fantastic day, I really enjoyed that moment. I appreciate it and since then we have established a very nice relationship.

“For us, especially for the club, we have achieved something very special. After getting back into the Premier League we had the intention to keep on improving.

“And the club is improving, even with the facilities and the support off the pitch, but we want to build a team and hopefully build a big club.” 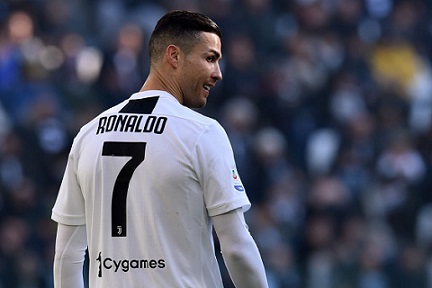 Ronaldo took less than two minutes to open the scoring at the Allianz Stadium, controlling a pass from Paulo Dybala before beating Samp goalkeeper Emil Audero with his low shot. The visitors equalised when Fabio Quagliarella converted his penalty following handball by Juve’s Emre Can, and Ronaldo’s ferocious long-range shot was pushed onto the bar by Audero in the second half as Juve sought to re-take the lead.

The champions did just that twenty minutes into the second period when Alex Ferrari was adjudged to have handled the ball in his own penalty box and Ronaldo stepped up to get his second. The goal was Ronaldo’s 14th in Serie A from just 19 appearances, and made it three goals from two games after his equaliser against Atalanta on Wednesday.

There was time for late controversy, however, after Riccardo Saponara’s stoppage time was disallowed by the referee after consulting VAR, in a decision which infuriated Samp president Massimo Ferrero. “We can’t expect to interrupt a game six or seven times even for minimal incidents. The referee will progressively lose his authority this way. VAR cannot be the sole protagonist. It’s making live football more like going to the cinema. We have to return the main authority to referees.”

Ronaldo disagreed, telling reporters that VAR is more of a help than a hindrance. “I like VAR, because these are difficult decisions for a referee and we should welcome anything that makes his job easier,” the Portugal captain said.

Juventus lead Serie A by nine points as the Italian league pauses for three weeks. “The team is doing very well, we had an excellent first half to the season, but must keep working to ensure we keep this kind of form in the second half of the season,” Ronaldo told Sky Sport Italia.