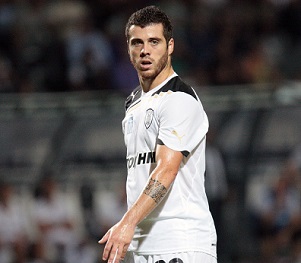 The increasingly large Luso contingent in Greek football inevitably gain their fare share of headlines throughout the season, but Sunday afternoon’s action saw a particularly special contribution from the men from Portugal.

Vieirinha scored his first goals of the campaign after coming on as a substitute to help champions PAOK rescue a last-gasp 2-2 draw with Panathinaikos, while Nélson Oliveira was also a hero for AEK with a double and a desperately late winner in their victory over Atromitos. Elsewhere, one of the goals of day went to Lisandro Semedo, who scored an audacious lob for OFI.

PAOK twice had to come from behind to maintain their unbeaten league record with a 2-2 home draw against Panathinaikos. The hosts went the entirety of last season unbeaten in the league and have continued to avoid defeat under new boss Abel Ferreira, who arrived from Braga over the summer to replace Razvan Lucescu.

Sunday’s draw in Thessaloniki saw Vieirinha officially announce his return following a couple of recent cameos as he recovers from an ACL knee injury sustained in February. The former Porto man was introduced at half time with his team 1-0 down, and Vieirinha levelled the scores twenty minutes into the second half with a beautifully placed shot from the edge of the area.

The equaliser put PAOK in the ascendancy to win the match, but after missing chances to go ahead the hosts were stunned when Panathinaikos re-took the lead through former striker Federico Macheda. A swift counter-attack in the 87th minute resulted in former Manchester United man Macheda slotting home and putting PAOK’s proud undefeated record at risk.

Time appeared to be up on PAOK when five minutes of allotted time were played, but VAR’s intervention to award a penalty for a barge on Jose Crespo handed Vieirinha the chance to add to his idol status at the Toumbas Stadium. The Portuguese skipped stepped up and ferociously lashed his penalty past Sokratis Dioudis to earn a point.

Oliveira the hero for AEK

Over in the capital, Nélson Oliveira was the central figure as AEK Athens came from behind to beat Atromitos 3-2, with the Portuguese netting during injury time to secure the win for his side. AEK fell behind after twenty minutes when Georgios Manousos fired in after his penalty had been saved by Panagiotis Tsintotas.

AEK pilled on the pressure but it was not until the last third of the match that Oliveira inspired the victory. The former Benfica man’s vicious left-footed shot hit the post before the rebound struck goalkeeper Christos Mandas and trickled into the net. Although Oliveira celebrated, the equaliser was inevitably ruled an own goal and given to Mandas.

Oliveira got himself on the scoresheet around ten minutes later to give AEK the lead, robbing Mandas after the goalkeeper took a poor touch and firing into an empty net. Visitors Atromitos were not beaten yet, however, and with two minutes remaining made it 2-2 when Thanasis Androutos converted from close-range.

That set the stage for Oliveira to be the hero with a 93rd-minute winner. The 28-year-old popped up in the right place at the right time, firing in at the back post to meet a flick-on following a corner. Although not the hat-trick Oliveira perhaps hoped for after his role in the first goal, the Portugal striker now has four in his last six league matches and AEK remain in 3rd place in the standings.

While the comebacks involving some of the country’s biggest clubs caught the eye, there was a goal to remember for one of the in-form strikers in the Super League. Lisandro Semedo scored his fifth goal in five games for OFI in their 3-2 defeat at Larissa, and his audacious lob from distance deserved better than to be on the losing side.

How about this goal from Portuguese Lisandro Semedo (0:25 in the video) for OFI in Greece earlier today! 🇵🇹 https://t.co/PnBGwBdevS via @YouTube

Elsewhere, leaders Olympiacos did not increase their lead over PAOK at the top, with Pedro Mendes’ side held to a goalless draw at Xanthi. Mendes selected José Sá in goal and Rúben Semedo in defence, while Daniel Podence took his place in a creative midfield role. Olympiacos are two points clear of PAOK after nine rounds.