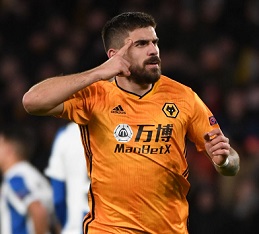 Diogo Jota and Rúben Neves take the headlines in this week’s Portuguese Abroad round-up of Europa League last-32 first legs, with Jota bagging a hat-trick and former Porto midfielder Neves scoring the goal of the evening in the competition for Wolverhampton Wanderers in a 4-0 win against Espanyol.

On the coaches front, Paulo Fonseca arrested Roma’s recent slump in results with a 1-0 win over Belgians Gent in the Italian capital, but there was frustration for Pedro Martins as his Olympiacos conceded a late goal to go down 1-0 at home to Arsenal in Greece.

The biggest story, of course, was at Molineux where Nuno Espírito Santo’s Wolves have already got one foot in the next round thanks to a 4-0 hammering of Spain’s Espanyol. Nuno restored João Moutinho to his line-up after he was rested last week against Leicester, while Pedro Neto dropped out as Rui Patrício, Neves and Jota all took their places.

Wolves took the lead on 15 minutes when Moutinho’s corner was flicked on by Raul Jimenez and landed for Jota to convert, but the home crowd would have to wait until early in the second half for the second and the moment of the match. Espanyol thought they had dealt with the threat of a cross but a headed clearance landed with Neves, who controlled the ball on his chest before volleying past Andres Prieto from distance.

Jota then took over, making it 3-0 midway through the second half with a well-taken second from Matt Doherty’s throughball, then completing his treble with a solo goal ten minutes from time. Between Jota’s second and third goals, Pedro Neto emerged from the bench and struck the woodwork with a thunderous left-footed shot.

“It was a good performance,” Nuno said after the match. “First half not so good, we didn’t create a lot of problems in possession and didn’t recover in the right areas. We adjusted second-half, beautiful goals, it was a good evening.

“Jota? I’m happy for him, delighted because when a player scores three goals, it means he’s helped the team a lot. He did a good job, not only offensively, also covering, always organised. Neves also scored a beautiful goal – we took advantage of the talent of the players.” 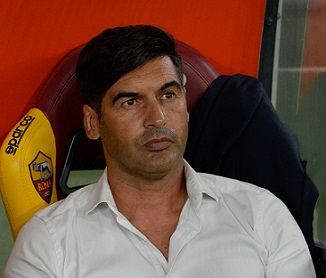 Fonseca not convinced as Roma win

Roma beat Belgian side Gent 1-0 at the Stadio Olimpico to end their five-match winless run, but boss Paulo Fonseca admitted the performance was far from impressive as their opponents proved wasteful in front of goal. An early goal from Spanish forward Carles Perez gave Roma the narrow advantage to take to Belgium next week.

“It was not a quality performance by any means, but this is a difficult moment, the team fought hard and did everything they could to turn the situation around,” Fonseca said. “Gent are a strong side, we didn’t play well, but the important things tonight were to keep a clean sheet and get the victory.”

“We can’t run many risks at the moment, as when the confidence is so low, we need to be more practical. The passing lines now are not what they were a month ago. I think the players are trying their best and it was very important that we win this evening. If we don’t defend well, we can’t attack well. I always think the best form of defence is to have the ball, as we don’t need to defend if we’re in possession, but to do that, we need players with confidence who want the ball at their feet. At this moment in time, that is not the situation.” 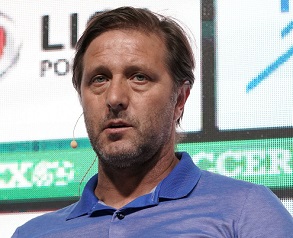 Pedro Martins and Olympiacos were close to a clean sheet at home in their first leg with Premier League side Arsenal, but a goal from Alexandre Lacazette with less than ten minutes to play gave the English team a priceless advantage. Mendes had José Sá in goal and Rúben Semedo in defence from the start, with Semedo booked midway through the first half.

Speaking after the match, former Guimaraes boss Martins told reporters: "Nobody likes to concede a goal in the final minutes. In general terms, we played well in a match with intensity. Football is all about effectiveness – we didn’t convert our chances, our rivals did. But today was just the first half of the tie. As far as I am concerned, the London match is open. We have a good team, quality players and I am confident that we can respond to the challenge."

Elsewhere, Andre Silva was given a start by Eintracht Frankfurt in their impressive 4-1 win over Salzburg in Germany. Silva registered an assist for the 4th goal scored by Flip Kostic, as the ex-Porto striker showed good composure on a counter attack to delay before playing the pass through to the Serbian to score. Gonçalo Paciência replaced his compatriot for the final 15 minutes.

Finally, Rony Lopes appeared for the first time in over a month for Sevilla in their trip to Cluj. Lopes, who has not started for the Spanish side in over two months since the group stage clash with APOEL in December, played the final 12 minutes of normal time as his side drew 1-1 with Cluj in Romania.

Jota was on fire! Neves the man at the back, and if Pedro's went in... Not a ‘Smith’ or ‘Jones’ on the scoresheet