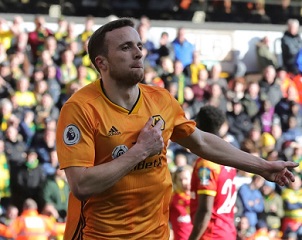 Diogo Jota scored a first-half double to put Wolverhampton Wanderers on their way to a comfortable victory over Norwich City in the Premier League on Sunday afternoon.

After the match Wolves boss Nuno Espírito Santo was full of praise for Jota, while there was typically high Portuguese involvement with the former Porto boss using six of his contingent during the win.

Jota, who was joined in the starting line-up by Rui Patrício, João Moutinho and Rúben Neves, put the home side 1-0 up on 19 minutes with a smart turn and left-footed finish inside the area. His second was a simple finish from inside the six-yard box on the half hour, before ex-Benfica striker Raul Jimenez added a third in the second half.

The brace for Jota comes hot on the heels of his midweek hat-trick in the Europa League, and amidst morning newspaper speculation linking him with Manchester United. The 23-year-old has five goals in the Premier League, as well as nine across the club’s long European campaign, and after the match Nuno praised his forward.

“He showed (his quality) today and has been showing through his performances, through his hard work, since the Championship,” Nuno said. “He still has a long way to go because I think there’s always space to improve.

“It (the performance) was good. We managed the game very well. We were always in control. Of course, the goals made it easier to stay organised. We blocked Norwich, they didn’t create too many chances, and we were clinical.

“Of course, three goals, more possession, staying in shape, always with the danger of not conceding. Clean sheet, everything starts there, so let’s keep on going.”

Pedro Neto and Rúben Vinagre were introduced during the second half, but Daniel Podence remained unused on the bench. Next up for Wolves is their Europa League return leg against Espanyol away from home, into which they take a 4-0 lead, before a meeting with José Mourinho’s Tottenham at the weekend.

I think Jota should be the starting left wing over Felix who isn’t even a winger anyways in my opinion. I really hope Renato keeps on playing well because I think he’s arguably our best wildcard player in midfield. A 4/3/3 with William carvalho,...

I think Jota should be the starting left wing over Felix who isn’t even a winger anyways in my opinion. I really hope Renato keeps on playing well because I think he’s arguably our best wildcard player in midfield. A 4/3/3 with William carvalho, Renato and Bruno Fernandes in midfield, up front Jota, Ronaldo, Bernardo would create havoc against anybody. Then you got Raphael and Ricardo bombing up the wings...it would be fantastic. João Felix can be a substitute for Renato or Bruno Fernandes.

Hoping that we try out this lineup for the March "tournament" in Qatar:

Hoping that we try out this lineup for the March "tournament" in Qatar: