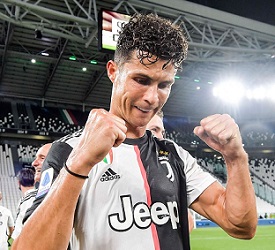 Cristiano Ronaldo added yet another trophy to his collection this weekend as Juventus were crowned Italian champions with two games left to play, securing a remarkable 9th successive Serie A title.

Ronaldo scored and also missed a late penalty in the Bianconeri’s 2-0 victory over Sampdoria in Turin, with the Portugal captain falling behind Lazio’s relentless striker Ciro Immobile in their fascinating battle for the top goalscorer award in Italy.

Ronaldo put Juventus ahead on the stroke of half time with a superbly-worked goal. Miralem Pjanic stood over a free-kick in the 7th minute of first-half stoppage time, before catching the Samp defence by surprise in finding Ronaldo just inside the box with a well-rehearsed pass for the Portuguese to brilliantly pick out the bottom corner.

The goal was Ronaldo’s 31st league goal in 32 Serie A matches this season and set Juventus on their way to the title-clinching three points. Ronaldo could have added a second from the penalty spot with just minutes left to play, but his effort cannoned off the crossbar. Lazio’s Immobile scored a hat-trick in a 5-1 win at Verona, putting him three goals clear of Ronaldo with just two matches remaining.

Ronaldo took to social media after the triumph and offered a thoughtful dedication to those who have suffered away from the pitch this year. “I am very happy for the second consecutive championship and for continuing to build the history of this great club,” he said. “This title is dedicated to all Juve fans, in particular those who suffered and are suffering from the pandemic that took us by surprise and turned the world inside out. It was not easy!

“Your courage, your attitude and your determination was the necessary strength to face this close final part of the championship and fight to the end for this title, which belongs to all of Italy. A big hug!"