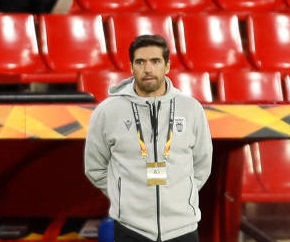 Abel Ferreira was confirmed as new coach of Brazilian giants Palmeiras ahead of the weekend, and the former Braga boss landed in Sao Paulo to take in his new side’s victory over Atletico Mineiro on Monday afternoon.

Verdão ran out 3-0 winners against Atletico with Abel in the stands, after which the new man at the helm will begin work in his new surroundings. Palmeiras fired veteran coach Vanderlei Luxemburgo last month after a poor run of results, leading them to Abel and a swift negotiation to release him from his contract with PAOK Thessaloniki in Greece.

It has been widely reported that Abel’s strong desire to make the switch to Brazil helped drive the deal, and speaking ahead of his flight to South America the 41-year-old spoke glowingly of his new club. “[What convinced me was] the greatness of the club, the way it is organised, the conditions it offers its players to achieve the goals and the challenge,” Abel said.

“The first objective is to win again, we know the greatness of the club, we know the players that are in the Academy. It was also one of the reasons that led Palmeiras to hire me, they want to trust in young players. So all the conditions are there for us to be successful together.”

Abel becomes the third Portuguese coach to be hired by a major club in Brazil since Jorge Jesus’ remarkable stint in charge of Flamengo, who won five trophies before returning to Benfica during the summer. Jesualdo Ferreira was briefly in charge of Santos, while Ricardo Sá Pinto was hired by Vasco da Gama last month.

“Did Jorge Jesus open the doors? To be very honest, I recognise the competence of Portuguese coaches, Jesus is one more of them. We have this ability to share our knowledge but also to get the players to follow our ideas and principles on the field, and this is what I will try to do. I don’t forget what got me here and that’s what I’ll look to take forward.”

Abel has already received the backing of former Brazil international Edmundo, who played for Palmeiras with distinction. “After firing Vanderlei Luxemburgo, Palmeiras was determined to hire a foreign coach,” Edmundo said. “Abel is a promising young coach, who started his career very well. Not long ago, he eliminated Jorge Jesus in the Champions League. The challenge is great but I believe he will be successful.”