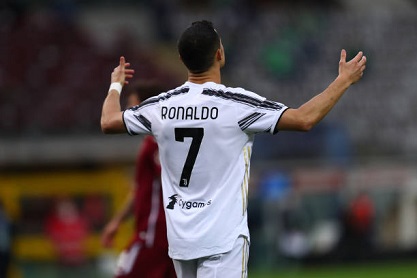 Cristiano Ronaldo maintains his record of over a goal per game in Serie A this season for Juventus after his late equaliser saved the Bianconeri from defeat to local rivals Torino. Ronaldo’s goal was his 24th from just 23 appearances in the Italian league, but more dropped points further dented Juve’s title aspirations.

Elsewhere, there was a memorable goal for former Sporting midfielder Ruben Ribeiro, who produced a superb strike as Hatayspor beat powerhouses Galatasaray 3-0 in Turkey. In Greece Xande Silva continued his good form with a goal and an assist, while Bebé snatched a late winner for Rayo Vallecano in the Spanish second tier.

Juventus fell 12 points behind Serie A leaders Inter this weekend after a 2-2 draw with local rivals Torino appeared to end their Scudetto ambitions. Juve gave up a winning position to find themselves 2-1 down ten minutes from time, before Cristiano Ronaldo salvaged a point by scoring from close range.

Ronaldo’s 24th goal of the league campaign sees him four goals clear of Inter’s Romelu Lukaku in the scoring charts. However, the aim of winning a 10th consecutive Italian title have dwindled and Andrea Pirlo’s side are realistically now in a battle to maintain their current 4th position, with Napoli in 5th drawing level on points with Juve this weekend.

Experienced Portuguese midfielder Rúben Ribeiro scored a superb goal in Turkey as Hatayspor thrashed title-chasers Galatasaray 3-0 in the Super Lig. The midfielder, who arrived from Gil Vicente last summer, was found on the edge of the box by a clever free-kick from Nigerian David Akintola, and Ribeiro dispatched the ball into the top corner with perfect precision.

Ribeiro’s goal put Hatayspor two goals up against Galatasaray, who had Gelson Fernandes in midfield for the duration, as well as former FC Porto striker Radamel Falcao for the second half. Ribeiro’s side are enjoying a fine season after promotion last year, with Hatayspor currently occupying 6th place in the top flight.

What a goal by Portuguese midfielder Rúben Ribeiro for Hatayspor in their victory over Galatasaray this weekend 🇵🇹🇹🇷pic.twitter.com/WHP54JCypi

Former Portugal U21 striker Xande Silva was the inspiration as Aris gave their Champions League hopes a massive boost this weekend with a 2-0 win over Asteras Tripolis in Greece. Silva scored the opener with some brilliant forward play before assisting the second late on, as Aris extended their advantage to four points over 3rd place PAOK, who were beaten 3-0 by Panathinaikos.

Some great forward play by Xande Silva in Greece this weekend 🇵🇹🇬🇷 pic.twitter.com/yUk1HrKdCy

The rest: Bebé winner in Spain

Bebé was the hero for Ray Vallecano this weekend in Spain’s Segunda Division, coming off the bench to score an 89th-minute winner away against fellow promotion hopefuls Almeria. Bebé entered the action on 78 minutes and a little over ten minutes later he scored the only goal with a left foot shot from the edge of the box aided by a slight deflection. Ivanildo Fernandes was sent off for the hosts.

Elsewhere, there was a goal for ex Portugal U21 defender Manuel da Costa, who struck for Erzurumspor in the Turkish Super Lig during their 2-1 defeat to Konyaspor. In Switzerland, Daniel Correia scored a decisive goal for FC Thun as they beat Wil 3-1 in the Challenge League, where André Ribeiro was also on target for Grasshopper. Finally, former Braga and Rio Ave forward Yazalde scored twice for Hermannstadt in Romania as they beat Arges, while midfielder Paulo Mendes struck for the second time in three matches for Caernarfon Town in Wales.