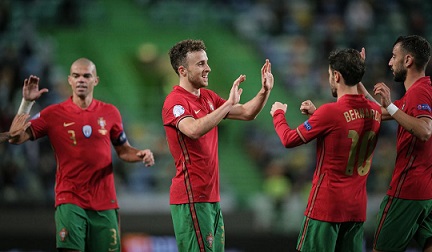 For opposition teams at the upcoming European Championship, the list of Portugal’s best footballers makes formidable reading. Magnificent performances throughout 2020/21 and the conquering of silverware and awards in major leagues during the season suggests the Seleção is in good shape to defend its crown this summer.

Football has always been by far the biggest sport in Portugal. The fact it dominates all others in terms of popularity, players and investment and its huge social and cultural weight in the nation helps explain why this small country has been able to produce many of the best and most famous football players across the world. The Euro 2016 victory further solidified football’s place as a sport with an enormous “feel-good” factor among the country’s general population.

The positive vibes associated with the national team in particular is reflected in the fact that the year’s biggest football event will feature several Portuguese players who are currently among the most talked about and most successful individuals in the game.

Cristiano Ronaldo is the best Portuguese footballer and probably the best player in the world! His full name is Cristiano Ronaldo dos Santos Aveiro and he was born in 1985. His position has evolved from a winger to a forward over his long career, with no let-up in the phenomenal success he has enjoyed. He currently plays for Italian giants Juventus, and despite a disappointing season for the storied club, Ronaldo was as effective as ever, scoring 36 goals and finishing 2020/21 as top scorer in Italy.

Many footballers like gambling and bet as well. If you like the same, make sure you check out the best and the most appealing bingo sites with free welcome bonus that are extremely popular these days. No-deposit-bonuses can help you play longer and win more, with the same investment. Keep in mind that there are all kinds of promotions and bonuses that should be used. This is something all players look for and they have been using it for a long period of time. It is also something all professional gamblers need and want.

Bruno Fernandes is another hugely successful and popular footballer from Portugal. He has been a revelation since signing for Manchester United in the January 2020 transfer window, immediately becoming the team’s Number One player despite the plethora of stars at Old Trafford. Wearing the No.18, he was born in 1994 and plays as an attacking midfielder. This player is commonly featured at some online casinos which have betting sections. His career is still on the up and should United continue to make progress and start winning regular silverware again, he will surely cement his place as one of the most popular and well-known footballing exports from Portugal.

Pedro Gonçalves is proof that the conveyor belt of outrageous Portuguese football talent is far from running dry. Just 22 years old, “Pote” as he is known, has enjoyed a sensational season at Sporting Clube de Portugal, helping the Lisbon club become national champions for the first time in two decades. He ended up top scorer in the Portuguese League with 23 goals, which is a remarkable achievement when you consider that he not even a striker. His displays earned him a place in Portugal’s Euro 2020 squad. Look out for Pote to take his wondrous form into the tournament.

A late bloomer, José Miguel da Rocha Fonte has become one of the Portugal’s best-known professional footballers, which is no mean feat considering he was playing in the lower leagues in England well past his mid-twenties. Sheer determination saw Fonte gradually climb his way to the top, making it to the English Premier League with Southampton for whom he made 288 appearances and became captain and cult hero.

Yet the best part of his journey was only beginning. José Fonte would go on to play a major role in Portugal’s Euro 2016 triumph, playing all the knockout matches, and this season captained Lille to a sensational Ligue 1 title, with the northerners overcoming PSG despite a huge shortfall in budget compared to the Parisians.

Diogo José Teixeira da Silva was born in 1996 and he is one of the youngest and yet very popular footballers from Portugal. His performances since signing for Liverpool earlier this season mark him down as one of the best emerging players in the world. Known for his non-stop energetic style of play, he accumulated 13 goals for the English giants, despite missing a sizeable chunk of the middle of the season with injury.

Signed by Atletico Madrid for a whopping 126 million euros two years ago, the silky-skilled forward has the talent to take over from Cristiano Ronaldo as the country’s new golden boy when the Portugal captain eventually hangs up his boots. Félix has yet to hit if full stride in the Spanish capital, but has still shone brightly on occasions. In November he won the Player of the Month award in La Liga. He may yet be Portugal’s main man at the Euros.

Sit back and enjoy

Football is by far the most watched and played sport in the world, which makes the achievements of a country with a population of just 10 million people even more extraordinary. You can even make an argument that Portugal has become known first and foremost as a country that produces many of the best footballers and coaches of today. You can enjoy real money betting and bet on these players. You can play slots that are based on these players and football in general and only increase the fun as you watch Portugal perform at the 2020 European Championship.

It's all up to Santos now, how is he going to play them? Are people going to be out of position again? Is there redundancy in midfield defence and not enough on attack? Are the players exhausted from the season? Dias, Cancelo, and Bernardo still...

It's all up to Santos now, how is he going to play them? Are people going to be out of position again? Is there redundancy in midfield defence and not enough on attack? Are the players exhausted from the season? Dias, Cancelo, and Bernardo still have a major game in hand, they will want to give their all but know the Euro's are around the corner and don't want injury.

I hope the formation is right because I know the players are.