Notable Nordic footballers who have played in Portugal’s Primeira Liga 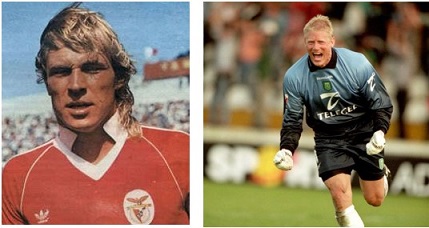 Footballers from all over the world have played in the Primeira Liga, the top division of the Portuguese football league pyramid. And several notable players have come from the Nordic countries: Denmark, Norway, Finland, Iceland, Sweden, and their associated territories. Some players are more well-known than others, though.

Here are a handful Nordic players who have put in memorable performances in Portugal’s top division.

Swedish defender Victor Lindelöf joined Manchester United in July 2017. But before he became a household name in English football, he played for Portuguese colossus Benfica. Lindelöf initially played for the youth team, and in his first season in 2012/2013, he helped the team win the Portuguese under-19 championship. In October 2013, he made his debut for the senior team in a 1-0 win against CD Cinfães in the Portuguese Cup. In the 2013/2014 season, he scored two goals in 33 matches, for the B team. Lindelöf hit his stride in the following seasons. He returned to the first team in 2015 putting in consistently brilliant displays, culminating in successive Primeira Liga triumphs in 2015/16 and 2016/17. Such was the Swedish centre-back’s influence, he was sold to Manchester United for €35 million in the summer of 2017.

If you want to see if you have what it takes to play for Benfica, you could always partake in the FIFA 20 PlayStation Club Scouting Challenge. The video game tournament sees clubs from around the world battling it out to become crowned champions. There are plenty of other online football games available too, such as the Football Star slot game, which you can play on this site.

Dane Peter Schmeichel, MBE, is regarded as one of the greatest goalkeepers of all time. In 1992 and 1993, the IFFHS voted him the World’s Best Goalkeeper, and in 2003, Schmeichel was inducted into the English Football Hall of Fame. He is most fondly remembered for his time at Manchester United, in which he captained the team to victory in the UEFA Champions League Final in 1999, and for winning the UEFA Euro in 1992, playing for Denmark. What many footie fans have now forgotten is that Schmeichel played for two years in the Primeira Liga for Portugal’s Sporting Clube de Portugal after deciding to leave English football at the end of the 1998/1999 season. Sporting had not won the Primeira Liga title in 18 years, but Schmeichel helped change that in the 1999/2000 season, in which Sporting became champions once again.

Tall, blond, technically limited but physically imposing, Danish centre-forward Michael Manniche initially found it hard to win over the majority of Benfica’s fans upon his arrival in 1983. They were used to seeing their forwards outwit opponents through moments of skill rather than strength and athleticism. But Manniche would become an outstanding success, scoring 76 goals in 132 matches for the Eagles, winning the Primeira Liga twice and the Portuguese Cup three times in his four-year spell in Lisbon. Manniche played for four other clubs in his homeland before and after his time at Benfica, but it was undoubtedly his spell in the Portuguese capital that represented the peak years of his long career. As a curiosity, future Portugal midfield star Maniche (actual name Nuno Ribeiro) was nicknamed after him. 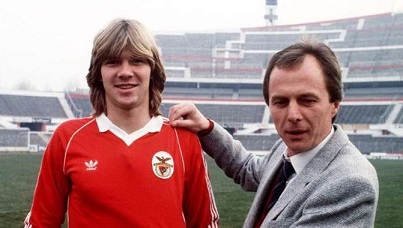 Swedish coach Sven-Göran Eriksson had two spells at Benfica (1982-1984 and 1989-1992) leading the club to three championships and two European finals – the UEFA Cup final in 1983 and the European Cup final in 1989, losing both of them by a single goal.

Eriksson is credited with overhauling Benfica’s training methods and tactics in a successful spell for the Eagles, and he also paved the way for several countrymen to wear the famous red shirt of the Lisbon club. Midfielder Glenn Strömberg (pictured here with Eriksson) was the first Swede to arrive at Benfica, playing for two seasons (44 matches, 6 goals), and he was followed by fellow midfielders Jonas Thern (101 matches, 10 goals), and the extremely popular Stefan Schwarz, who also clocked up over a century of games for the Portuguese giants (111 matches, 10 goals).

Arguably the most successful of the Swedish players in this era though, was Mats Magnusson. The centre-forward represented Benfica across five seasons, netting 87 goals at a scoring rate of more than a goal every two games. With the eagle on his chest, Magnusson lifted two national championships (1988/89, 1990/91) and was the league’s top scorer in 1989/90 with 33 goals.

The Norwegian footballer Azar Karadas currently plays for the club SK Brann in the Eliteserien professional league for Norway’s association football clubs. He has also played professionally for teams in England, Germany, Turkey and Portugal. After signing to Rosenborg BK in 2002, Karadas soon gained the attention of international teams; especially after he scored two goals against Inter Milan in a 2-2 home-draw in a UEFA Champions League match. Portuguese club Benfica secured the 23-year-old in 2004. Although he only played for one season, he contributed to a successful season for the Lisbon club. As part of veteran coach Giovanni Trapattoni’s squad, Kardas scored four goals and helped Benfica win the Primeira Liga championship title for the first time in 11 years.