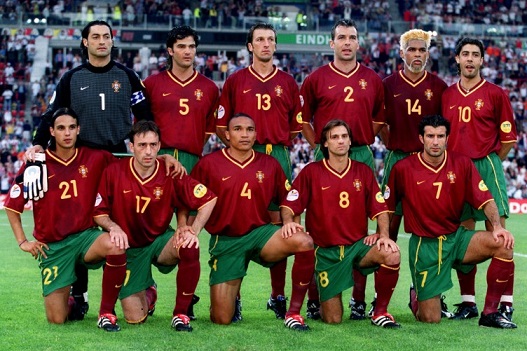 In these trying times, what better way to lift the mood of a nation than replaying one of its great sporting moments. It is no exaggeration to say that description perfectly fits Portugal’s exhilarating comeback victory against England in a 5-goal thriller at the 2000 European Championship, held in Belgium and the Netherlands.

Last night, as the country braces itself to bear the worst of the Coronavirus pandemic, the FPF’s official TV channel reran the match in its entirety, allowing Portugal’s sports fans to delight in a truly sublime performance by a team in which the famed “Golden Generation” was at its peak. PortuGOAL shared the excitement of re-watching the match on Twitter, and the reaction worldwide soon made it apparent that this is a game that truly resonates with Seleção fans all over the world.

In an extract from The Thirteenth Chapter – From Eusébio to Ronaldo – Portugal’s 50-year journey from football minnows to European Champions, Tom Kundert recounts the famous encounter in Eindhoven.

The unremitting media glare typically associated with England’s participation in tournament football ensured a massive audience would be tuning in for Portugal’s Euro 2000 opener against the Three Lions. After all, with Germany and a strong Romania also making up the group, both teams knew defeat here would mean facing the very real prospect of an early flight home.

Luís Figo was slap bang in the middle of a particularly scintillating period in his brilliant career, as was Rui Costa, while England’s midfield also boasted two huge stars of the global game at the time in Paul Scholes and David Beckham. Much of the build-up had inevitably focused on the battle between two iconic footballers at the peak of their powers and future Real Madrid teammates Figo and Beckham. Happily, neither player, nor the match itself, failed to live up to the considerable hyperbole.

You beauty. @Canal_11Oficial showing this match live now. From this lineup do you know what it is? pic.twitter.com/OjDTAhzIGQ

In terms of a sporting spectacle, it was a classic in itself, but looking at the bigger picture from the Portuguese point of view, if any one match can be pinpointed as the moment the Seleção truly came of age as a force to be reckoned with in the modern era, this was it.

One would frequently hear the knowledgeable football-loving Portuguese public, perhaps spoiled by the magical skills of Figo and Costa, comment on how over-rated David Beckham was. “All he can do is cross the ball,” was an oft-repeated observation in Portugal’s bars and cafés when assessing the Manchester United man. Yet it was precisely two pinpoint centres, clinically dispatched into the back of Vítor Baía’s net by Paul Scholes and Steve McManaman, that put England two goals up with just 18 minutes on the clock.

“After 20 minutes, I admit I was a little afraid because we were 2-0 down and there was still a long way to go. We weren’t playing badly, but I admit it crossed my mind that we could be in for a hiding.” – Nuno Gomes

The game had barely started and the Manchester United man was stealing the Beckham versus Figo show. As Gomes noted, Portugal had not played badly up until then and to their immense credit, they did not panic; quite the opposite in fact. The Seleção’s mesmeric attacking game started to click into gear and slice through the increasingly bemused English midfield and defence.

Nuno Gomes had a goal ruled out for a marginal offside decision straight after England’s second, but shortly afterwards a stupendous strike from Figo rocketed into the top corner of David Seaman’s net, via a Tony Adams deflection, with the helpless Arsenal goalkeeper rooted to the spot. The sensational goal further energised Portugal, who took a firm grip on the match, the crisp passing and flowing movement leaving England’s players chasing shadows for sustained periods.

Seaman pulled off two outstanding saves but an equaliser was inevitable and duly arrived in the 37th minute, the beauty of the goal exemplifying the majestic football the Portuguese were producing. A patient build-up saw the ball worked to the right flank via a seemingly never-ending succession of passes as Portugal played keep-ball. But there was purpose to their possession. Having engineered space for himself, Rui Costa took the briefest of looks into the box and whipped in a firm low cross where the onrushing João Pinto launched himself into one of his trademark diving headers, sending the ball flying into the corner of the net via the inside of Seaman’s right-hand post, the goalkeeper again left with no chance.

A thrilling game was all square at the interval, although Portugal’s domination from the 20-minute mark suggested Humberto Coelho’s men would go for the kill in the second half, a notion confirmed by Pinto’s effort hitting the woodwork upon the restart. 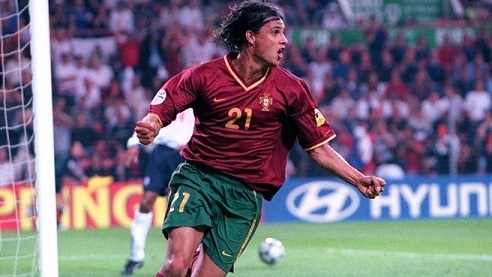 Rui Costa, having arguably his best ever game for Portugal – and there are a lot of good ones to choose from – was again the architect of the goal that put the Seleção into the lead on the hour mark. The No. 10 picked up the ball near the halfway line, jinked his way past several adversaries, before threading a majestic defence-splitting pass to Nuno Gomes who confidently beat Seaman with a thumping finish with the outside of his right foot.

The irrepressible Gomes had the ball in the net again, heading in on 73 minutes, but for the second time in the match he was denied a goal by an offside flag. It mattered not as Portugal held on comfortably for a famous comeback win.

Portugal had started their Euro 2000 campaign in spectacular style. The day after, Portuguese sports daily Record had no doubt it was a victory for the ages. “Fantastic! Memorable! Amazing! Class and Character! Quality and Courage! You could run out of adjectives to describe Portugal’s performance, but suffice to say this is a game that will go down as legend,” wrote João Marcelino.

As well as being one of Portugal’s greatest ever matches, it set the tone for the team’s participation at Euro 2000. This was only the beginning.