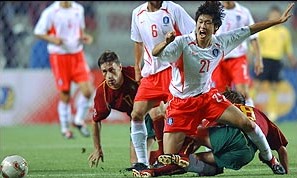 In under three weeks Portugal will conclude their World Cup 2022 Group H campaign with a match against South Korea in Qatar.

Seleção fans will be hoping history does not repeat itself.

Just like in the only previous World Cup held in Asia, in 2002, South Korea – the joint hosts of the tournament – met Portugal in the final group game. A dramatic encounter ensued, which ended in heartbreak for the Seleção.

In the following extract from The Thirteenth Chapter – From Eusébio to Ronaldo – Portugal’s 50-year journey from football minnows to European Champions, Tom Kundert recounts the match on 14 June 2002 at the Mun-hak Stadium in Incheon.

Despite Portugal’s opening day shocker against the USA, other results in the group meant that a draw against South Korea would likely be enough for both the Seleção and the joint hosts to progress. This scenario was all but confirmed after just five minutes, as Poland went two goals up against the USA in the other Group D match, being played simultaneously.

Steadfastly ignoring the other game, Portugal did not alter their game plan, and FPF vice-president António Boronha would later lambast coach Oliveira on this point. “After 8 minutes, when I tried to transmit news of Poland’s second goal to the coaching team, I was told the National Team coach did not want to be informed of the score in the game. Each person can draw their own conclusions, even though some of them are absurdly stupid.”

A more potent demonstration of the internal strife and lack of cohesion among the Portugal delegation would be hard to imagine.

Nonetheless, things seemed to be under control as both sides took a cautious approach in the opening minutes. The South Korean public had reacted enthusiastically to being drawn against the Seleção. Portugal’s global stars, especially Luís Figo, were hugely popular in the country, and several local media outlets even went as far as to say a draw would be the ideal result.

Disaster struck for Portugal on 27 minutes as a wild tackle from behind by João Pinto resulted in the Argentinian referee Ángel Sánchez brandishing a straight red card. Unfortunately for the fiery forward, it was the last act in his distinguished international career (81 caps, 23 goals). To exacerbate the sad end to Pinto’s days in a Portugal shirt, Sánchez wrote in his referee’s report that Pinto had delivered a punch in the stomach with his right fist. Exhaustive attempts at finding hard TV and photographic evidence proved inconclusive, but Pinto was handed a six-month suspension by FIFA’s disciplinary committee and would never play for Portugal again.

Playing with ten men, Portugal’s numerous fitness problems and poor preparation ahead of the tournament were terribly exposed by the exuberant South Korean team that had been meticulously prepared from a physical point of view over a two-year period. In the energy-sapping Asian humidity, the Seleção unsurprisingly began to labour, the home players, spurred on by the excitable crowd, first to every 50/50 ball.

Things began to truly unravel for the Seleção when Beto received his second yellow card in the 66th minute. Portugal’s nine men had 25 minutes to hold on to the draw they needed to finish second in the group. Oliveira withdrew Pauleta for an extra defender, Jorge Andrade. But less than five minutes after Beto’s sending off, Park Ji-sung showed the audacious skill and presence of mind that would see him carve out a successful career in Europe, controlling a cross beautifully on his chest, flicking it past Sérgio Conceição with his right foot and firing under Vítor Baía into the net with his left.

As Park wheeled away to take the adulation from the ecstatic crowd, Portugal’s nine men were suddenly facing a seemingly impossible task. Bodily and mentally debilitated, the Seleção were unable to match the physicality of their supremely conditioned opponents, all the more adrenalin-enthused by the rapturously cheering home fans.

However, a mixture of wounded pride, pure grit, and sheer desperation resulted in Portugal reacting manfully to the task, throwing themselves forward in search of the goal that would take them to the Round of 16. Figo fired a free-kick inches wide, Nuno Gomes missed a glaring opportunity, and Sérgio Conceição saw an acrobatic effort thud off the inside of the post, while at the other end Vítor Baía produced a series of incredible stops as South Korea somehow failed to capitalise on the acres of open space left at the back.

A match that had started cautiously and at serious risk of going into the history books as a “convenient draw” ended in an anarchic, emotionally charged, 11 versus 9 with chances being blown at either end of the pitch. But as the final whistle blew, the stark reality was Portugal had crashed out of the 2002 World Cup at the group stages.

I remember this game we lost our heads at the end that was a big joke of a game we still almost scored with nine men if I recall. Well a lot of monkey business going on in that tournament. You're never going to get rid of corruption as long as...

I remember this game we lost our heads at the end that was a big joke of a game we still almost scored with nine men if I recall. Well a lot of monkey business going on in that tournament. You're never going to get rid of corruption as long as there's humans running anything but man FIFA during those times man where they corrupt.

Read More
Robert Martins
There are no comments posted here yet