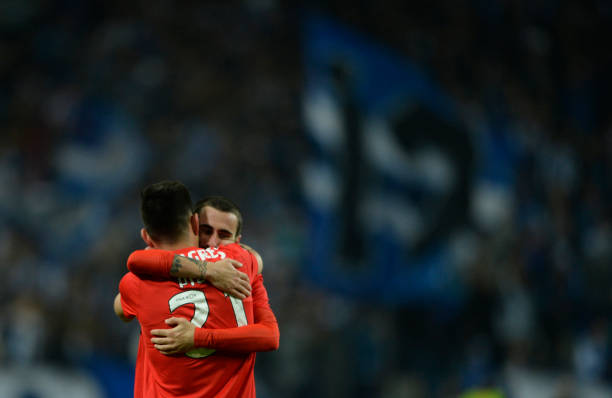 Benfica have risen to the top of the Primeira Liga table after coming back from a goal down to defeat FC Porto 2-1 at the Estádio do Dragão, this Saturday.

Porto took the lead midway through the first half via Adrián López - an effort cancelled out by João Félix’s equaliser before the half-time break.

Rafa Silva’s finish in the 52nd minute completed the turnaround for Benfica, pushing the Eagles two points clear at the top of the table, who were forced to battle through the final exchanges of the encounter reduced to 10 men following Gabriel’s red card.

The big news in the hosts’ corner saw the previously-injured Moussa Marega make his way back into the Porto XI, unlike the benched Éder Militão, meanwhile Bruno Lage placed his bets on a tried and trusted line-up, led by João Félix and Haris Seferovic in attack.

Porto sought directness very early in the encounter, firing from range through Alex Telles' left foot, forcing Odisseas Vlachodimos into the first save of the game inside half a minute.

Yacine Brahimi earned his side another prime opportunity to strike at goal after being brought down in his venture down the left-hand side by Rúben Dias, earning his side a free-kick in the 18th minute.

Rather than having the Algerian step up to the set-piece, it was Adrián who took the measurements before letting fly against the wall on his right foot, making amends on the rebound with a side-footed volley into the far corner to place Sérgio Conceição’s side 1-0 up.

Benfica responded through Pizzi in the 22nd minute, nipping in with the ball inside the box before opening his body up and taking aim at goal, where Casillas would stand tall to deny the midfielder.

The openings kept coming for the Eagles, however, who by the 27th minute made sure one of them would count as João Félix collected a cross from strike partner Seferovic from the left before picking his spot inside the box, subsequently levelling the encounter.

Seferovic was handed the opportunity to extend his rich vein of form in front of goal and put Benfica ahead on the brink of half-time, receiving Pizzi’s through ball before firing on his left coming into the area, but the Swiss striker was unable to direct his effort away from Casillas, who blocked his shot.

The two XIs came out intact for the second period but the dynamic of the contest soon changed after a give-and-go between Rafa and Pizzi unlocked the Porto defence before the winger could find the bottom corner in the 53rd minute.

Brahimi led the charge for an equaliser almost immediately, cutting in from the left and firing a fierce strike just over Vlachodimos’ goal.

From Wilson Manafá, Porto almost found a way in for the leveler after the full-back’s run up the right flank was spotted and the ex-Portimonense man was able to pull a cross back for Herrera to strike, just as Samaris burst onto the scene to crucially rob the Mexican of a prime opportunity.

At the other end, Rafa came close to picking out the same corner that had brought joy to the away end early in the second half, just moments before a rush of blood from Gabriel saw him pick up a red card for an altercation with Otávio, as Benfica played out the final ten minutes with a numerical inferiority.

The Dragons turned to a set-piece to edge themselves closer to an equaliser, with Felipe grazing the top of the bar with a header after rising highest from Alex Telles’ corner.

Two big saves from Vlachodimos late on safeguarded Benfica’s lead, firstly denying Felipe’s effort from range before Marega could find no way through from the subsequent corner.

The title holders were kept out throughout the final exchanges, consequently surrendering top spot to Benfica, who are now two points clear of Porto with ten league games to go.