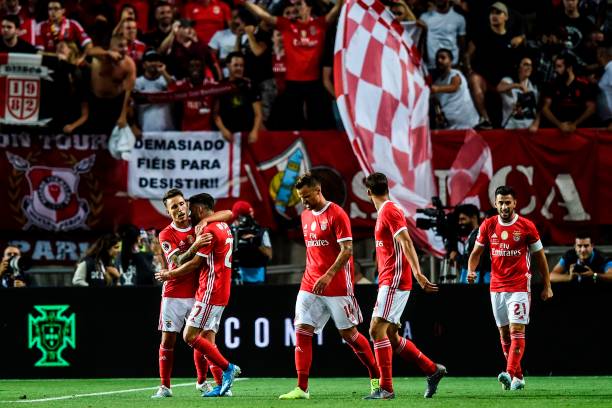 Benfica claimed the 2019 Portuguese Super Cup after a second-half capitulation from ten-man Sporting saw the Primeira Liga champions put five past the Lions in a 5-0 thrashing, as the two Lisbon outfits went head-to-head in the Estádio do Algarve, tonight.

After a competitive first half of football, edged by Benfica following Rafa Silva’s opener, two goals in quick succession set the Eagles into a 3-0 lead midway through the second period.

A Pizzi brace took the score to four soon after, leaving the final honours to new-boy Chiquinho to pick up, as the ex-Moreirense man got himself off the mark in red and white to conclude a forgettable night for Sporting.

Marcel Keizer reverted to a back five for the occasion at kick-off, enabling Luis Neto to pick up his official debut for the club, as Lage unleashed his new signing, Raúl de Tomas, to partner Haris Seferovic in Benfica’s attack.

A lightning start from Sporting almost saw the Lions take the lead just two minutes in, countering via Bruno Fernandes before prompting Ferro to turn his intervention towards his own net, as Odisseas Vlachodimos got down well to palm the potential own-goal wide.

De Tomas took aim for the first time in the 10th minute as Sporting failed to clear their lines from Pizzi’s corner, but the Spaniard’s on-target volley traveled kindly into Renan’s orbit for the Brazilian’s stop.

Approaching the half-hour mark, Bruno Fernandes edged us closer to the game’s first goal with a first-time shot aimed at Vlachodimos’ goal, who was in turn forced to reply to the strike with an important save.

The two came face-to-face once more in the 37th minute, as Acuña slipped Bruno Fernandes in on goal via the left before Benfica’s goalkeeper came out on top, gathering up a low drive caught under him.

Benfica’s response was positive, breaking the deadlock soon after through Rafa Silva with a side-footed volley across goal, ghosting in at the back-post to meet Pizzi’s cross five minutes from the break.

A chance apiece set up another entertaining half of football before Rafa, dispossessing Jeremy Mathieu just outside the Frenchman's own box, returned Pizzi the favour to assist Benfica’s second goal of the night in the 60th minute.

Sebastian Coates’ challenge from behind offered the Eagles another opportunity to pile further misery onto the Green & Whites via a free-kick, duly taken by Grimaldo to put Benfica 3-0 up in the 63rd minute.

Stunned, Sporting came close to shipping in a fourth soon after via Seferovic, with Renan standing strong to deny the Swiss hitman. Lage’s men remained keen to rub salt into the wounds, however, profiting from yet another Rafa and Pizzi combination for the latter’s brace in the 76th minute, squeezing a finish under the goalkeeper on his left foot.

The night’s sour taste intensified for Sporting when they were reduced to ten men after Idrissa Doumbia's second bookable offence, and then Chiquinho, on his debut, dealt the Lions a final blow with Benfica’s fifth from close range, concluding a 5-0 victory for the Eagles.