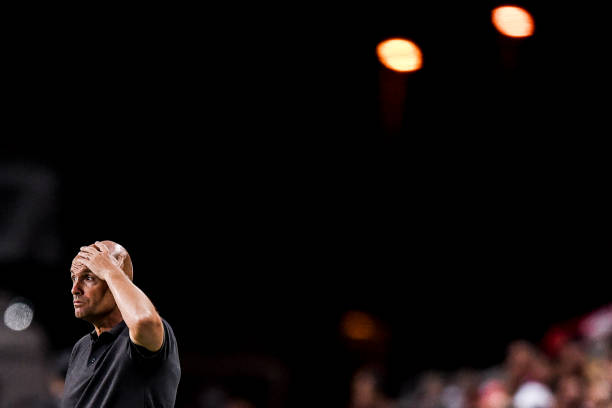 From a results’ perspective, there can generally be no right or wrong way to rev through a pre-season campaign, with many games heightening the importance of the team’s synergy, physical evolution and tactical projection over any eye-popping results, good or bad, that may come a team’s way.

Sporting stood to test that theory, collating high moments versus the likes of Liverpool and Valencia but, by the end of it all, emerging from preparations with three draws, three losses and, more worryingly, no wins - an unwanted feat not seen by the ‘Green & Whites’ since the summer of 1967.

Panic? No. Well, not until bitter rivals Benfica were able to wreak havoc with a 5-0 battering against the Lions to conquer the Portuguese Super Cup, last Sunday, anyway. As the Sporting faithful digest the daunting figures, PortuGOAL takes a look at the troubling issues following the Lions into the 2019/20 season.

As the club attempted to emerge from the dramas that unfolded one summer ago, dominated by the Alcochete training complex invasion that gave way to high-profile departures, Sporting readied itself for a fresh start under new club president Frederico Varandas after his election win in September 2018. Centering his pitch around in-house unity, the fresh-faced doctor-turn-chief was also keen to push out the boat for a new, more concise and apt vision for the club, instilling a culture of optimal organisation, discipline and self-sufficiency unlike anything the green half of Lisbon had seen before under his predecessors, he claimed.

The plan re-designed Sporting’s internal structure, welcoming back familiar faces, such as Beto and Hugo Viana, in a bid to make the Lions more aware of their needs, be it in the market or via the promotion of academy products. Varandas led on to promise an overhaul of the facilities themselves, packaging his Sporting to align its ethos with the likes of Ajax, currently championing youth recruitment and fulfilment at the highest level.

It was perhaps fitting that Varandas’ first managerial appointment in late-2018 came the way of an ex-Ajax head coach in Marcel Keizer, at the time in charge of Al-Jazira. Without being one of the more vibrant names to the Portuguese game, the subscription to a very particular philosophy seemed clear, as the 50-year-old arrived in Lisbon with a reputation for favouring an expansive brand of football.

Alvalade marveled at the Dutchman’s success, expelling the uninspired methodology before him to present something easier on the eye and bunch seven comprehensive wins from his first seven games, racking up a total of 30 goals in all competitions. An away loss to Vitória de Guimarães appeared to muddle Keizer’s cards a bit and even after Sporting replied with yet another eye-catching victory, this time defeating Feirense 4-1 at the start of this year, the Lions never quite recovered the same vim, losing disappointingly to Tondela some games later.

With inquests into whether opposition had learned and adapted to Keizer’s ways, or if the manager had the adequate players to play the way he prefers doing the rounds, a heavy 4-2 defeat to Benfica at home signalled his definitive retreat, as we began to see the five-at-back donned with greater regularity by those in hooped shirts.

There was a strong sense of getting by, of survival, before going again at the start of next season with greater time for adherence, re-adaptation and tactical refinement during pre-season, giving Keizer the time to really get his ideas across to the players and ever-present staff. Sporting couldn’t have asked for a better springboard, claiming both the Taça da Liga and Taça de Portugal on their way out of the 2018/19 season, but the opportunity to reinvent themselves appears to have evaded the Lions little more than two months down the line.

The summer transfer window has seen Sporting equip themselves with five new faces thus far, but just how many of those players elevate the team to the point of furthering their identity is the question many, including Keizer, will be asking themselves.

There’s quality and strength in numbers to be had with the arrivals of Luis Neto and Valentin Rosier from Zenit St. Petersburg and Dijon, respectively, even if the latter has missed all of this summer’s settling-in period. Ex-Internacional man Eduardo also joins after impressing across the city last season for Belenenses on loan, adding to the capture of Idrissa Doumbia from Terek Grozny, last January. Between the two, Keizer aims to carve a suitable option to sit at the base of his favoured midfield three - a modern number six proficient at setting the tempo, progressing the ball upfield, meanwhile also maintaining his positional posture for added defensive security. Despite the two possessing great mobility and notable technique, a lack of awareness, as of right now, align the midfielders closer to ones tailored for a double-pivot role, leaving Keizer, outside the elusive Daniel Bragança, without the deep-lying maestro his possession-based football requires.

Issues arise further up the field, with the role of cute and associative striker being handed to Luciano Vietto, fresh from a string of unsuccessful loan spells in Spain and England. Having scored just once last season, deep in January of this year, Sporting will have their work cut out to not only rebuild the Argentine’s confidence, but also up his output.

Once more, outside of the slight ex-Atlético Madrid import, Keizer’s hard-pressed in his bid to modernise his frontline. Bas Dost, Sporting’s chief goal-getter, has physical limitations that impede us from seeing him at his best when fronted with scarce support on the counter and high defensive lines, such as Benfica’s. Alternatively, the work ethic and brute physicality Luiz Phellype is able to provide in such games is curtailed by a lack of finesse in the final third, leaving Sporting, despite the number of goals accrued by the aforementioned, without a tailored option to promote and enhance the type of football one might associate with an Ajax, Barcelona and beyond.

When coupling the wrong tools with a series of poor results, Keizer’s decision to revert to a five-man defence vs. Benfica, even after negating the system entirely in the lead-up to this season’s curtain raiser, becomes remotely understandable.

More worryingly, from a creative perspective, is the club’s ill-veiled dependency on Bruno Fernandes, even after weeks of being Premier League-bound. It’s the same customer popping up between the lines, destabilising the opposition and taking risks in green and white, a duty that even blemishes the playmaker’s record, statistically, such is the expectancy for him to score and/or deliver that final pass.

Rather than explore alternatives, Keizer has found himself utilising Bruno Fernandes heavily during pre-season, signalling a huge operation to replace the midfielder should he leave this window. In this respect, the waiting game hasn’t been kind to the Sporting boss, as his employers sit tight in anticipation of a deserved mammoth bid for their star man from the likes of Manchester United, Tottenham Hotspur and more.

The Portugal international’s heir is unlikely to come cheaply either once its common knowledge that the club are sitting on a war chest of sorts, with few names out there capable of coming close to the 50-goal contribution (32 goals and 18 assists) amassed by the skipper. It’s clear that rather than replacing Bruno Fernandes’ output in one jab, Sporting stand a better chance of doing so successfully with two or three additions capable of making things happen in the final third. Players that can, in turn, make Sporting a more cohesive and unpredictable prospect going forwards.

A couple of options may already be loitering around Alcochete. The buzz around Ecuadorean starlet Gonzalo Plata is filtering through nicely and, despite being oddly edged to the first team by the barely-fit Abdoulay Diaby, this Sunday, the Under-20 World Cup star has plenty of scope to grow into this current starting XI from the flanks. One who’s less likely to do the same, much due to the rebellious nature acquired in recent seasons, is Matheus Pereira, otherwise rising to Bundesliga Rookie of the Month status when given the first-team opportunities he so craves. On that note alone, perhaps Sporting should reassess their approach with the young Brazilian, capable of offering unique playmaking qualities between the lines that his competition from wide areas cannot.

The reason as to why Matheus Pereira has seen his involvement limited at Alvalade is a curious one, as Keizer deflected the responsibility onto the hierarchy, post-Valencia. It’s not uncommon for that to be the case as a head coach working within a specific model, but it can be easy, in particular for a more serene character like the Dutchman, to see his influence in the dressing room wane when results aren’t there to back him up. There is no Jorge Jesus-style iron fist, or a more emotive approach donned by the likes of Benfica’s Bruno Lage, being projected from Sporting's dugout, and since the vision and on-field results (league-specific) aren't quite there, it's plausible that the club opt to seek greater guidance from their managerial figure in the near future, ramping up the pressure on the former Al-Jazira man.

One of the main reasons for this is because the candidates on the pitch to steer the club forward with their leadership come few and far between, especially should Bruno Fernandes leave. The likely candidates to deputise with the armband are Sebastian Coates and his defensive partner Jeremy Mathieu, boasting a wealth of experience and composure between them. Yet one can’t help but feel the Lions still require more.

There’s no disputing the weight of expectation placed upon the club currently hunting for its first Primeira Liga title in 18 years (and counting). Since then, we’ve seen the club being run in different manners, subsequently creating the current divide between the resistance of the oft-branded ‘Brunistas’, loyal to their former club president Bruno de Carvalho, and the not-so-affectionately named ‘Sportingados’, defendants of the new regime.

The rift is one that can be felt and, courtesy of social media, very easy to follow for all, including the players. That level of toxicity rears its ugly head every time Sporting is on the receiving end of a poor result and in turn, following the shocking events that transpired last summer, turns the club into a hub of negativity certain players want nothing to do with.

One wonders, after a solid showing in the opening 60 minutes versus Benfica, how many of those Sporting players helplessly folded as a direct consequence of what the club has and continues to go through as a destabalised club. How many had the belief that they could hold their heads high and battle on after conceding a second and third versus the Eagles, or was self-doubt, a by-product of the ambience felt around Alvalade, simply too strong to bear? Are they quietly thinking, "what's the point"?

As the infamous Portuguese metaphor goes, which of those Sporting players are capable of taking their fists to the table, grabbing team-mates’ by the scruff of the neck to ensure episodes like Sunday’s don’t happen again? Under current circumstances, few names jump out and it may even be the telling difference, that fine detail, that’s kept the Lions from intervening in the dominance of its main competitors, Benfica and FC Porto, in past years.

On recent viewing, even the most optimistic of supporters would have to agree that the current trend is likely to continue ahead of the new season. With soul-searching at the summit of their plans, Varandas, Keizer and co. have the best part of a month to somehow avert that feeling.