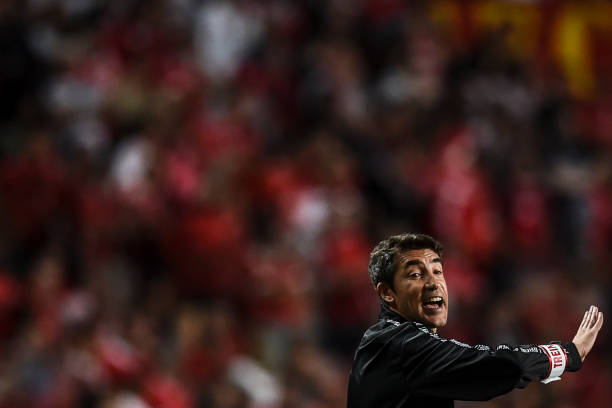 Benfica have returned to winning ways in the Primeira Liga after two second-half own goals from the Sporting de Braga backline, alongside a Pizzi brace, enabled the Eagles to secure a 4-0 victory away from home.

The win comes after city rivals Sporting picked up their first defeat of the season, courtesy of a horror show at the back from Sebastian Coates, conceding three penalties in a 3-2 defeat to Rio Ave and picking up a red card for his troubles.

Suspensions are something Vitória de Guimarães also won’t be short of, having been forced to play out practically all of their encounter away to Porto down to ten men. Goals from Moussa Marega and Ivan Marcano charged the Dragons on to a 3-0 home win, as their opponents were reduced to nine bodies come full-time. PortuGOAL brings you the final moments of the Primeira Liga top action before the international break.

As Sporting aimed to protect themselves at the top of the Primeira Liga in this early stage of the season, Europa League hopefuls Rio Ave, in Carlos Carvalhal’s return to Alvalade, were out in search of a consecutive victory to add to last week’s 5-1 thrashing dished out to Desportivo das Aves.

A perfect start for the visitors saw Mehdi Taremi earn his side a penalty early doors, converted sometime later by Filipe Augusto, but Bruno Fernandes was on hand to level the game in the 19th minute after Rio Ave’s failure to clear their lines from Marcos Acuña’s low cross.

The activity in front of goal dried up on our way to half time before Luiz Phellype could turn in Thierry Correia’s cross in at the back-post in the 53rd minute, as Sporting took a 2-1 lead shortly after the restart.

Controversy struck in the dying moments of the game after a minor clip from Coates on Taremi was deemed enough for a second Rio Ave spot-kick, this one coolly converted by Ronan in the 86th minute. Acuña almost reversed the equaliser just a minute later with a desperate attempt to nod in at the back-post from a Bruno Fernandes cross, hitting the woodwork instead.

Sporting’s ultimate punishment came in the 88th minute after Coates, for a record third time, brought his man down inside the box to concede another penalty, with the Uruguayan also picking up a second yellow card for his troubles. Augusto was re-elected to take the penalty, making no mistake against Renan Ribeiro and clinching a 3-2 win for the Vilacondenses.

After last week’s triumph at the Estádio da Luz versus Benfica, the onus was on Porto to build on their Clássico success at home to Vitória de Guimarães, coming into this encounter on a high of their own following Europa League qualification in mid-week.

Ivo Vieira’s men were forced to tackle the Dragons at a numerical disadvantage fresh out the gates, however, as Edmond Tapsoba saw red for a tackle controversially judged by the referee as an ill-timed last-man challenge.

Marega inclined the game in Porto’s favour with the game’s first goal in the 14th minute, controlling Jesús Corona’s cross before cutting back in on his favoured right foot and burying his chance past the helpless goalkeeper.

There was to be no way through for Rochinha and Lucas Evangelista up against Augustín Marchesín either side of the interval in Vitória’s desperate attempts to get back into the game; hopes that evaporated in the 79th minute when a red card for protesting saw Davidson leave his side fight on with just nine men.

Porto pounced on the visitors’ frailties, doubling their lead via Marcano in the 88th minute before Marega earned himself a brace four minutes later when squeezing a shot under Miguel Silva and closing the game out at 3-0.

With victory only on the Eagles’ minds, Braga welcomed Benfica to the Estádio Municipal de Braga to resume their search for a result against the Lisbon outfit that’s evaded them since October 2014.

In the 23rd minute, Pizzi was reunited with the goals after a high foot from Hassan on Florentino Luís brought forwards the opportunity for the Benfica captain to break the deadlock from the spot, overcoming Matheus from the 12-yard-mark.

A hero in front of goal in midweek, only the post stood in Ricardo Horta’s way when receiving Ricardo Esgaio’s cross and firing on the turn for what could’ve been Braga’s equaliser in the 38th minute.

Benfica injected some breathing space early in the second period, calling on Pizzi once more to provide the goods after the midfielder met André Almeida’s cross to steer a side-footed effort past the keeper after 47 minutes.

Braga then became the masters of their own demise, starting in the 51st minute with Bruno Viana turning Haris Seferovic’s cross into his own net. Esgaio repeated the feat in front of his own goal in the 73rd minute to set Bruno Lage’s side up with a 4-0 win.