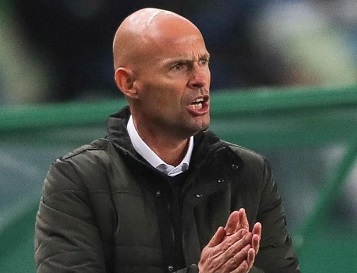 The turbulent start to the season for Sporting took another turn today as head coach Marcel Keizer was dismissed by the Lisbon club.

The Dutchman won the two domestic cups last season, but a poor run of results allied to drab performances have cost him his job.

Leonel Pontes, until now coach of the under-23 team, is promoted on an interim basis to take charge of the senior team.

“We decided that today is the end of a cycle,” said club president Frederico Varandas. “Keizer came to Sporting in November 2018, and we remember all too well what state the club was in at the time, and that almost nobody wanted to come here, but he had the courage to do so.

“He carried out his mission with distinction, he won two trophies, and Sporting is grateful for what Marcel Keizer did. A cycle has come to an end, but Keizer has always been a great gentleman and even at the time of departure he was a great gentleman.”

Varandas’ words were backed up by Keizer himself, who showed no bitterness at his dismissal. “Portugal is a good country to work in, with many different things to the Netherlands, but a lot of good things,” he said. “I look back and it was a great period, winning two cups. Now it’s time for someone else.”

Keizer appealed for unity, mentioning the need for the fans to get behind the board. A sizeable section of the club’s fans has ceaselessly criticised the actions of the current president and his directors, especially on the social networks where many are calling for a return of his firebrand predecessor Bruno de Carvalho.

“I hope that Sporting remains united. When everyone supports the board and the players, it will be good for the club,” said Keizer, pointedly.

The new man in the dugout will not have an easy start. Sporting play away at unbeaten Boavista on Sunday 15 September before beginning their Europa League campaign in the Netherlands at PSV Eindhoven four days later.