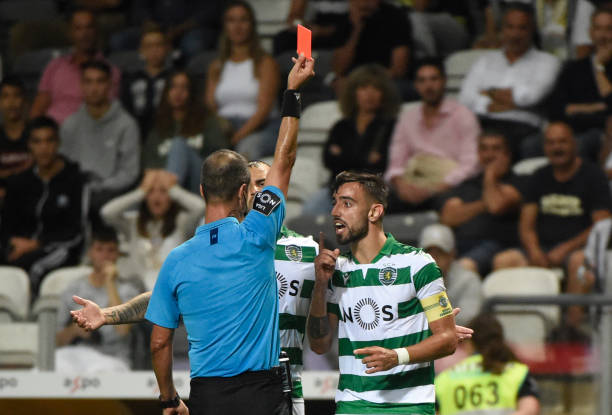 A 98th-minute header from Ivan Marcano gave ten-man F.C. Porto a precious 3-2 victory away to Portimonense, having seen the hosts pull a two-goal-advantage back to 2-2 in the second period and place the two sides on the brink of sharing the spoils.

Porto’s win sees them go level on points with second-placed Benfica after their comfortable 2-0 victory against Gil Vicente on Saturday night, just as Famalicão held firm in first place with a 4-2 win versus Paços de Ferreira.

Elsewhere, Sporting de Braga picked up their third league defeat of the season in Friday’s Matchday 5 opener versus Vitória de Setúbal, losing 1-0, meanwhile Sporting, on Leonel Pontes’ debut as interim manager, closed out the week with a 1-1 draw away to Boavista. PortuGOAL has more from this weekend's action.

It has been an interesting start to the 2019/20 season, with all the title favourites already experiencing defeat. After five rounds, surprisingly only Famalicão and Boavista remain unbeaten. Who will come out top at the end of the campaign? If you think you know, you’ll want to take advantage of no deposit bonuses and put a bet on the Liga NOS winning team.

The Primeira Liga reopened its doors with a clash between two of its mainstay clubs as Braga hoped to climb up the table with what would be a key win at the Bonfim on Friday night.

Both sides looked inseparable as the game unfolded, however, with Ricardo Horta looking like the likeliest to break the deadlock before half-time with a placed effort from the left bouncing onto the far-post, leaving the score untouched at the interval.

Braga began peppering the opposition’s goal in the second period without managing to overcome the secure Giorgi Makaridze between the sticks. Vitória were able to make matters worse at the other end through Khalid Hachadi, scrambling in the opener in the 73rd minute.

The frustration was telling in Ricardo Sá Pinto’s side, later epitomised by Fransérgio’s red card, via VAR consultation, for a late swing of the arm aimed at his opponent’s face, as Setúbal handed out Braga’s third defeat of the season.

Joy for Famalicão in Saturday’s earlier game meant the Eagles wouldn’t attain top-spot, regardless of the result, but the eyes remained naturally on the prize against the newly-promoted side at the Estádio da Luz.

Responsibility to place the Eagles on track fell on Pizzi’s shoulders after the midfielder was brought down inside the box, but the free-scoring midfielder would fail to overcome the goalkeeper from the penalty spot in the 10th minute.

Instead, it was Gil Vicente’s Ygor Nogueira who’d be the first to introduce the ball into the net, albeit his own, with special praise directed at Adel Taarabt for his piercing pass wide before André Almeida’s fateful cross in the 45th minute, damning the desperate defender.

Eight minutes into the second period, Pizzi arrived at the back post to make amends for his earlier penalty miss by slamming in Alex Grimaldo’s corner on the half-volley, doubling Benfica’s lead. The best Gil Vicente could offer was a tight-angled swipe from Bozhidar Kraev, roaming agonisingly across the face of an empty goal, as Bruno Lage’s team held on to a standard 2-0 victory at home.

Porto took to Portimão for their fifth league game of the season aiming to cement their spot in the top three with a win against bottom-half Portimonense. The Dragons started the stronger of the two sides, helped on by a Jadson handball inside the box for Alex Telles’ opener, picking his spot from the 12-yard-mark in the 24th minute.

Sérgio Conceição’s men doubled their lead a little while later through Zé Luís at the back post, increasing the visitors’ comfort going into the break.

Portimonense asked the questions late in the second period, however, pulling a goal back through Dener’s header before Koki Anzai, cutting in from the flank in the 77th minute, worked enough space to bend in an equaliser from range on his left foot.

With the game going right to the wire, matters worsened for Porto after Alex Telles’ dismissal in stoppage time before 11th-hour heroics from Ivan Marcano snatched all the glory for his side in the 98th minute of the game, nodding in Jesús Corona’s corner and keeping his side within touching distance of top-spot.

Donning somewhat of a new look following the end of the transfer window, Sporting were hosted by Boavista at the Bessa with new boss Pontes in charge, handing out first starts for Yannick Bolasie, Valentin Rosier, Luís Neto and Gonzalo Plata.

The spotlight was soon hijacked by Marlon Xavier, however, stepping up to a long-range free-kick and catching out Renan Ribeiro for the game’s first goal, placing Boavista a goal up.

Blunt in attack, Sporting required a free-kick of their own to bite back in the second half, with Bruno Fernandes adding yet another goal to his account via a wickedly-deflected effort past Rafael Bracali on the hour-mark.

Sporting’s goalscorer and Bolasie, leading the line, carried the greatest amount of danger for the visitors before falling some way short at the final whistle, drawing 1-1 following Bruno Fernandes’ red card and pending one-game-suspension versus table-toppers Famalicão.