Benfica back in business in the Champions League - player ratings 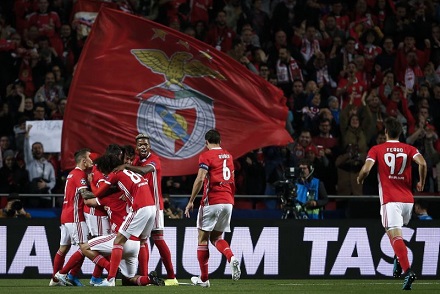 Benfica recorded a vital 2-1 win against Lyon in the UEFA Champions League at the Estadio da Luz tonight. Rafa Silva gave the Portuguese champions an early lead before picking up an injury and replaced by Pizzi. The Benfica captain capitalised on a howler from Anthony Lopes to score the winner in the 85th minute after Memphis Depay had equalised for the French side.

Odisseas Vlachodimos 6 - Slightly hesitant in the first half with some nervy moments but grew into the game. Couldn’t do anything about Depay’s equaliser but did well to turn Depay’s shot wide as it looked destined for the top corner.

Álex Grimaldo 8 - Benfica left-back had a tough battle nullifying the threat posed by Maxwel Cornet, but largely won the battle and made a crucial block on the Lyon winger. Grimaldo offered an important outlet in attack, setting up Seferovic who shot wide and was one of Benfica’s best players.

Rúben Dias 7 - Collaborated well with Ferro to limit the danger posed by Moussa Dembele. Blocked a goal-bound shot with his head and was an important player in limiting Lyon to one goal.

Ferro 6 - Had a tough time with Cornet but another Benfica player that grew into the game. Made a crucial challenge on Traore in the second half, still has a long way to go but these matches will provide invaluable experience for the 22-year-old.

Tomas Tavares 7 - Tavares has the easier assignment of Benfica’s full-backs with Terrier offering little going forward for the French side. Ventured forward on occasion, and provided a perfect cross in the first half for Seferovic who blasted over the bar. Came into the match more in the second half, doing well under pressure and continuing to improve.

Thoughts from the Estádio da Luz from @noobzcorp and myself after Benfica 2-1 Lyon. pic.twitter.com/fp1tySgxtQ

Gabriel 8 - Busy early on, showed composure by breaking up play and did his best to distribute balls to Benfica’s attack. One of Benfica’s best players despite failing to tackle Cornet in the box and fading in the latter stages.

Rafa Silva 7 - Started brightly, found space and popped up in the box to score an opener. Was looking like having a big game but unfortunately picked up an injury and was forced off in the 20th minute.

Franco Cervi 7 - Had a lot of defensive work to do helping Grimaldo stop Cornet but was still in position to assist Rafa for the opener. Made way for Raul de Tomás which made Benfica far too open on their left wing.

Gedson Fernandes 6 - Pushed higher up the pitch after Rafa went off injured and played as a second striker. Bruno Lage might not know what his best position is but Gedson will be a boost after returning from injury.

Florentino Luís 6 - Played in the holding role but was caught out of position a number of times in the first half and his passing was wayward. Has plenty of potential and but can play much better than this.

Haris Seferović 5 - Picked up an early injury and missed a presentable chance in the first half. The Swiss striker and the crowd at the Estadio da Luz seem to have forgotten how clinical he was last season.

Pizzi 7 - Found it hard to get into the game after replacing Rafa Silva early on. Pizzi moved inside in the second half, saw more ball and hit the post before showing great anticipation to capitalise on Lopes’ wayward throw for the winning goal.

Carlos Vinicius 6 - Was welcomed with applause after replacing Seferovic in the 59th minute. The Brazilian striker was largely starved for service but made a nice run on the left wing to create a chance for de Tomás.

Raul de Tomás 6 - Came on for Cervi in the 77th minute. Had little time to impact the game, wasted a good chance after being set up by Vinicius.

by Matthew Marshall, at the Estádio da Luz