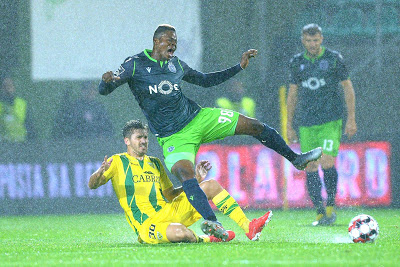 Sporting have picked up their third Primeira Liga loss of the season in a 1-0 defeat away to Tondela, falling further behind league-leaders Benfica and second-placed FC Porto.

The Eagles opened the week up with a 2-0 win at home to Rio Ave before Sporting slipped up on the road to a late Bruno Wilson goal, earning Tondela their first home win of the season.

Porto followed the Lions to deal Desportivo das Aves a 1-0 result of their own at the Estádio do Dragão, whereas ten-man Famalicão were able to avoid a second defeat of the season with a late equaliser away to Sporting de Braga, sharing the spoils with a 2-2 draw on Sunday night. PortuGOAL brings you the pick of this weekend’s action.

It was back to fending off their competitors for table-topping Benfica at the Estádio da Luz, as Carlos Carvalhal’s Rio Ave made their way to the Portuguese capital of Lisbon on Saturday night.

To unlock the Vilacondenses, the Eagles relied on their newly-found prowess from set-pieces, with Rúben Dias climbing high to power a header in at the back-post in the 31st minute.

Rio Ave challenged the hosts with a shot against the near post prior to the half-time break before Pizzi, in the 50th minute, looked to place the game out of reach with his 5th league goal of the season.

Rúben Dias came close to adding a second goal to his name with a flick-on past the on-rushing keeper and, most importantly, the far-post, as the two sides saw a 2-0 score-line out to full-time.

In good form, results-wise, Sporting were looking for win number six from seven under Jorge Silas, whereas the aim for Tondela was to claim its first home victory of the season against a team they often perform against.

Starting ahead of Eduardo, Miguel Luís could and should have edged the Lions in front in the 31st minute, floating Stefan Ristovski’s cut-back over the bar from a prime position.

The Green and Whites thought they’d have 45 minutes up against 10-men after the referee brandished a straight red card on Filipe Ferreira for a high challenge on Idrissa Doumbia’s calf on the brink of half time, but a closer look by the referee, via the VAR, reversed the decision.

Two free-kicks from Bruno Fernandes were all Claudio Ramos had to worry about between the sticks before Bruno Wilson appeared on the scene with a looping back-post header to turn the game in Tondela’s favour a minute shy of the 90th.

Sporting were left without response, concluding a second defeat for Silas in his latest managerial venture.

The Dragons required an adequate response in front of their home crowd after hobbling off top-spot with a 1-1 draw away to Marítimo on Wednesday night, with Aves in town to challenge Sérgio Conceição’s men.

Iván Marcano got the hosts off the mark in style in the 13th minute, lurking inside the area to execute Otávio’s cross first-time on the volley, steering the ball across goal and in off the post.

Tiquinho Soares sparked more danger with a shot tipped over past the half-hour mark as Porto took a 1-0 lead into the break. Pepe took Porto closer to a second when his header inside the box was palmed onto the top of the crossbar, prolonging the northerners’ domination throughout the game.

Just the one goal would be enough for the hosts, however, as they cemented second place for the week and moved back to within two points of Benfica.

A week after picking up their first defeat of the season, away to Porto, Primeira Liga new boys Famalicão braced themselves for a fresh test away from home versus Braga, desperate themselves to bounce back from their midweek disappointment against rivals Boavista.

Complications arose for João Pedro Sousa’s side following Roderick Miranda’s sending off in the 34th minute, but that didn’t stop Famalicão breaking the deadlock through Toni Martinez, finding the bottom corner with a low strike coming into the second half.

Braga pressed heavily for the equaliser before Galeno, driving at the visitors’ box in the 76th minute, found the pathway to slot his right-footed shot into the back of the net with precision.

Galeno doubled up on the feeling, as well as Braga’s count of goals, to put the hosts ahead just a minute later, but Anderson had different ideas at the other end when following up on Matheus’ save and tapping home in the 89th minute for a 2-2 draw.