Sporting team of the decade 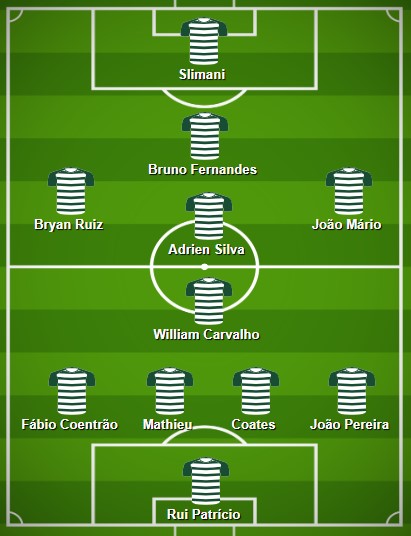 In the third of PortuGOAL’s “team of the decade” series, Pedro Taveira (@ppaodemonio), brings us Sporting’s finest XI selected from players who represented the Lisbon club in the 2010s.

As the graphic to the right shows, although Sporting has struggled to put together consistently competitive teams in the past decade, it is not through any shortage of top-quality footballers at Alvalade in that time.

Indeed, four of the SCP team of the decade played a major role in helping Portugal lift its inaugural piece of major silverware, at Euro 2016. Take it away Pedro.

This Sporting line-up comprises the players who had the most influence and showed the most quality in their respective position in the past decade.

The most obvious choice, and the only one possible. Undisputed starter over the decade, he gave up the chance to become the club’s record appearance holder to damage the president, by deciding to rescind his contract and sign for Wolves when just 28 games separated him from legendary left-back Hilário. 467 matches, including growing pains and undeniable quality, we had the privilege of seeing him develop only to see him depart in the worst possible way when he was the captain and leader of a squad. Substitute: Marcelo Boeck

149 matches in Sporting’s defence and a starter in the brilliant 2015/16 season. João Pereira was the successor to Abel, and just getting rid of that fire extinguisher with legs makes his place deserved in this list. The upgrade in quality in relation to Abel is immense. Ability to move forwards with the ball and play out from the back, the way he integrated into the attack completely transformed the position for Sporting. We all remember, however, his temperamental excesses, which cost red cards and some defeats. Substitute:  Cedric Soares

Sporting’s inability to keep a settled team together for several seasons is one of the explanations we have won almost nothing. Coates has 178 games and joined in the middle of the 2015/16 season, and since then has been an uncontested starter. Substitute: Paulo Oliveira

Four million euros wasted on a 34-year-old who was past it was what most people thought when he signed in 2017. Instead, unmistakable class – our best central defender since André Cruz. He is lacking a title win to enter into the pantheon of the collective green and white memory. Substitute: Rojo

Okay, okay, Coentrão only played 40 matches for Sporting but the quality he showed was extraordinary. A player who knew exactly what to do in any situation, he went through everything at Benfica and Real Madrid. Substitute: Acuña

From a peasant to a prince to a motherfuckin’ king (oh yeah). Biased, but in my opinion, he is the best player to come from our academy in the last 15 years. Exceptional physical and technical quality, he was always one step ahead as a youth player and under Leonardo Jardim he became a major player in 2013/14. Class and composure with fantastic feet. I thought that when Jorge Jesus arrived, William would take his game to an even higher level. This wasn’t the case, but Sporting started to play with a 2-man midfield instead of 3 in the middle and you didn’t notice any difference. Merit of JJ and the players. Substitute: Rinaudo

The player who most benefited from the arrival of Jorge Jesus at Sporting. Adrien fitted JJ’s tactics perfectly and transformed his output to even higher levels, which culminated in getting into Portugal’s Euro 2016 team. Substitute: André Martins

Fundamental player in the 2015/16 season and instrumental both in attacking and defending. So important was he, that he became something of a fetish for JJ, which did him no favours in subsequent seasons when his productivity fell. Substitute: Nani

Left with a space to fill by André Carrillo’s departure on a free, the solution was to transport João Mário to the right. Like Bryan Ruiz, he was one of the main reasons for the success of 2015/16. Crucially important in occupying space and extremely tactically intelligent. Substitute: Gelson

There is not much to say about the best player in the Portuguese league. He puts up stratospheric numbers for a midfielder. It’s up to him to carry the team on his back, something he’s done since he arrived at the club. He would be an even better player if it wasn’t on him to do everything from midfield forwards. Substitute: Matias Fernandez

Effort, Dedication, Devotion and some Glory. The player who most reflected what Sporting has been in recent years. He wasn’t the best player in the world but he gave his utmost to win. A player who evolved significantly from Leonardo Jardim’s time to become a weapon applying constant pressure and a lethal finisher. A big-game player, he became a complete centre forward at Alvalade. Substitute: Bas Dost

Our thanks to Pedro. You can find his (usually very strong) opinions on all things Sporting and much more on Twitter @ppaodemonio.