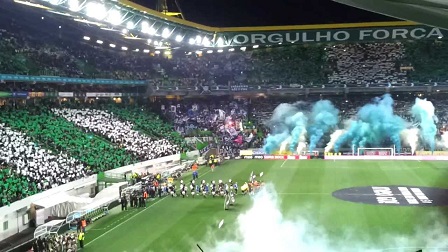 Football in Portugal is back from its Christmas break and the first round of Primeira Liga matches of 2020 sees Sporting host FC Porto in Lisbon on Sunday afternoon.

The visitors will be desperate for all three points to stay in touch with leaders Benfica, while Sporting are looking to build on improved form of late. PortuGOAL previews the first Clássico of the New Year.

It’s been a torrid season for Sporting. The club has gone through three coaches who collectively have accumulated only 14 wins in 31 matches in all competitions, a run that included an embarrassing exit from the Portuguese Cup at the first hurdle and the snuffing out of any hopes of competing for the title.

However, the current incumbent of the Alvalade hotseat, Jorge Silas, has overseen a slight improvement over recent weeks, the Lions winning 7 of their last 9 matches, and Sporting scored four goals in each of their last two games. The home team will be keen to send a message to their fans that the club are starting to right a ship that has been blown badly off course by a series of unfortunate events and poor decisions in recent years.

Porto title tilt in the balance

Porto have been inconsistent this season, but coach Sérgio Conceição was keen to point out that his is the only team in Portugal which is still fighting to win silverware on four fronts. The coach’s optimism comes on the back of his bold affirmation stating, “I am convinced Porto will be champions this season” right after his team had dropped two points at Belenenses in early December to fall four points behind leaders Benfica.

For Porto’s players and fans to be imbibed with the same belief, victory at Sporting will be key, which implies a reverse of recent history. You have to go back to 2008 to find the last time the Dragons won away at Sporting in the league, with the northerners clocking up 4 defeats and 6 draws in the 10 years since. Given the Lisbon outfit are generally considered to have their worst team in the said decade, Porto would appear to have the perfect opportunity to break the hoodoo. And with Benfica facing a tough fixture the day before at Vitória Guimarães, Porto will be acutely aware that results this weekend could prove pivotal as regards who finishes top of the table come May.

🗣 Join @ConMurphySport for a huge game in the title race!

As ever, Sporting’s hopes of a positive result will be largely pinned on captain and talisman Bruno Fernandes. Despite the malaise the club finds itself in, Fernandes continues to post astonishing stats for a midfielder, scoring 13 times in 23 matches so far in 2019/20. At the other end of the pitch, it will be big test for young goalkeeper Luís Maximiano, who has recently made the starting spot between the posts his own. His first Clássico coincides with his 21st birthday. Congolese forward Yannick Bolosie had his red card against Portimonense rescinded and will likely start, while young striker Pedro Mendes could be a surprise weapon, most likely from the bench. The centre-forward has been in prolific form for Sporting’s U23 team and is now eligible to play for the seniors.

Porto have a major injury doubt surrounding Portugal international Danilo, who is struggling with an inflamed right knee. The holding midfielder faces a late fitness test. Up front in-form Tiquinho Soares (6 goals in his last 6 games) will lead the line alongside fellow striker Moussa Marega. The winner of the battle between these two most physical of strikers and Sporting’s centre-back partnership of Sebastián Coates and Jérémy Mathieu could prove vital to the outcome.

But while Sporting’s threat is obvious and one-dimensional, Porto have several potential game-changers in their XI, with Colombian Luis Díaz and Mexican Jesús Corona no doubt instructed to try and provoke Sporting’s temperamental full-backs Marcos Acuña and Stefan Ristovski.

Jorge Silas, Sporting coach: "We go into every match looking for the win, be it Porto, Benfica or PSV. If we had any other mentality we wouldn't be at this club. Porto are an extremely strong team, who have won almost all of their recent games, but so are we. Either of the two teams can win."

Sérgio Conceição, Porto coach: "The match is equally important for the two clubs. Whoever represents these clubs are always under pressure to win. It will be 50/50. Sporting are now a better organised team, who are scoring a lot and conceding few goals. Porto haven't won here since 2008? I don't attach much importance to those kinds of facts. We will be looking to write our own history in this match."