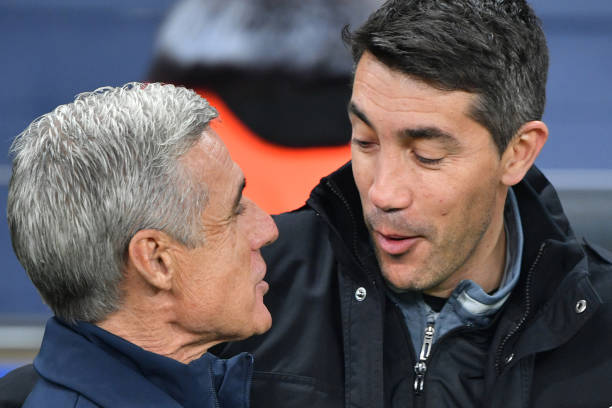 Benfica will have a one-goal deficit to overturn back in Portugal after losing 2-1 to Luís Castro’s Shakhtar Donetsk in the Europa League’s last 32 first leg in Ukraine, this evening.

After the warnings in the first period, the Lisbon outfit were punished by Alan Patrick’s opener in the 55th minute, having seen the Ukrainians enjoy their fair share of possession up until the Brazilian’s placed effort.

A curious VAR review moments later saw Tomás Tavares lose out on a goal on his European debut and Benfica earn a penalty in the same swoop, converted by Pizzi to make it 1-1.

The Eagles’ leveller was short-lived, however, after Viktor Kovalenko placed Castro’s men back in command of the tie, sealing a 2-1 victory in Kharkiv.

In a game that pinned two Portuguese managers against each other, Benfica’s three changes saw Bruno Lage hand starts to Florentino Luís, Chiquinho and Swiss hitman Haris Seferovic in Ukraine, among calls to field Andreas Samaris instead.

Following a tentative start, it was via Florentino that Shakhtar found their big break to counter in the 20th minute, initially testing Odisseas Vlachodimos through Júnior Moraes before Marlos popped up to volley in the rebound.

A VAR review served to cool the mood, however, picking up Marlos edging just in front of the last man to be in an offside position, ruling out Shakhtar’s opener.

The taste for the goal was there and the Ukrainian side intensified their hunt just moments later through Kovalenko, cutting inside from the right flank before forcing a save out of Vlachodimos on his left peg.

One of Benfica’s first sightings of goal came deep in the 44th minute, with Pizzi working a yard before swiping a left-footed shot wide of the mark in a goalless half, largely dominated by the hosts.

Luís Castro’s men renewed the first-half theme in the second period, striking the post through Ismaily’s shot across goal that evaded the incoming Kovalenko on its way back out.

Ismaily came knocking again in the 54th minute with a roaring run down the left flank, cutting back a pass to Marlos prior to the latter’s shot being kept out by Vlachodimos’ parry away.

The Greek shot-stopper was left helpless just a minute later, however, as Marlos laid the ball on a plate for Alan Patrick to steer into the bottom-right corner, finally placing the hosts a goal up.

Against the run of play, Tomás Tavares thought he had conjured up an equaliser in the 62nd minute following a controversial VAR review that chalked off the goal for offside, due to Franco Cervi’s involvement, who at the same time managed to earn his side a penalty.

Eagles captain Pizzi stepped up to the 12-yard-mark ahead of Andriy Pyatov, with the midfielder making no mistake and levelling the game at 1-1 in the 66th minute.

Shakhtar hit back after a lapse in concentration from Rúben Dias in the 72nd minute, losing out to Moraes down the byline prior to the Brazilian-born striker feeding Kovalenko for goal number two.

Benfica were left without a response en route to their third consecutive defeat in all competitions, with the tie, at 2-1, still in the balance ahead of the return leg next week at the Estádio da Luz.