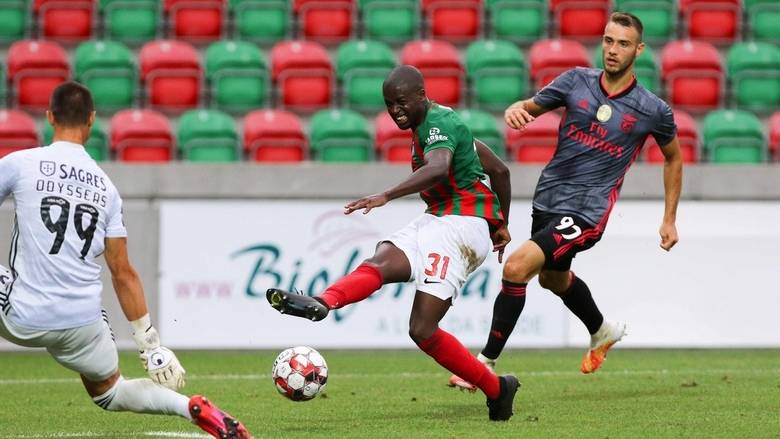 FC Porto have moved one step closer to claiming the Primeira Liga title after Benfica lost for a second consecutive game, this time falling to a 2-0 loss at the hands of Marítimo away from home.

The Eagles started well in Madeira but were made to pay for missed opportunities, with goals from Jorge Correa and Rodrigo Pinho in the final 20 minutes wrapping up Bruno Lage’s time at Benfica. The head coach offered to resign from his post after the final whistle.

Porto replied with a 1-0 win on Monday night, against Paços de Ferreira, as they increased the gap between them and second place to six points with just five games left to play.

With the margin of error set at an absolute minimum, the journey to Madeira presented itself as a defining moment in Benfica’s season, should they fail to register a win once more.

The Lisbon giants seemed to be on their job, just as Marítimo’s Amir Abedzadeh was to deny both Chiquinho and Carlos Vinícius from point-blank range in the opening quarter of an hour.

José Gomes’ side left small warnings in the first half that Benfica would ultimately fail to address, with Nanú, already deep into the second period, using his pace to devastating effect on the counter and setting Correa up for an easy opener across goal.

With 78 minutes on the clock, Nanú went on another piercing run, producing a cross-shot for Rodrigo Pinho to scupper in and up Marítimo’s advantage to 2-0 against a dejected Benfica.

Only a correct offside call prevented the hosts from worsening the score from Benfica's perspective, but, with a two-goal deficit come full-time, the damage was already done for Benfica, who now set their attentions on finding a new coach.

A meeting at the old Mata Real versus a Paços de Ferreira team fighting tooth and nail to stay in the division is no mild task, but Porto had the prospect of moving six points clear at the top of the table to tune their minds.

The Dragons presented themselves as very much on the ball, typically taking the lead via a corner, as Chancel Mbemba kept the set-piece alive to volley in the opener after seven minutes. Dominance soon mellowed, however, as Porto reacted to Paços’ possession play by hanging onto a 1-0 lead going into the break.

The advantage was almost cancelled out coming into the second period via Luiz Carlos, nearing an equaliser with a downward header skipping just past the far post in the 49th minute.

Following renewed pressure from the hosts to claw a goal back, Luis Diaz scuppered the chance to hand Sergio Conceição’s men some much-needed breathing space when missing a one-on-one in the 75th minute, courtesy of a mix-up in the Castores’ defence.

Porto wouldn’t need the second, however, despite Jorge Silva providing a late threat to Porto's goal from range, forcing Marchesín into a fine diving save, with Mbemba’s sole strike proving enough to push them six points clear at the top of the Primeira Liga table.