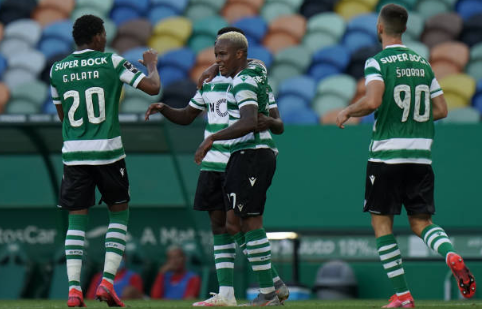 Sporting de Braga have kept themselves alive in the race for a top three finish after replying to Sporting’s earlier 1-0 victory versus Santa Clara on Friday night with a 5-1 thrashing away to Paços de Ferreira.

Rúben Amorim and his team took to the stage first in Lisbon where Jovane Cabral’s sole goal in the second half would make all the difference for the Lions in a deserved 1-0 win.

Braga eased themselves in against Paços with a first-half hat-trick from Paulinho, scoring two more either side of a Uilton consolation goal to confirm a 5-1 victory that that keeps the gap between the two Sportings at three points.

Coming in off the back of a goalless draw away to Moreirense earlier in the week, Sporting’s mission was to re-polish their otherwise exemplary league form of late, winning four out of their last five league games, ahead of their meeting against FC Porto on Wednesday.

The Lions started strongly, threatening to break the deadlock early through Andraž Sporar’s close range header and a disallowed Idrissa Doumbia goal, whereas Santa Clara sat tight and sought opportunities on the counter, like the one glanced just wide by Thiago Santana in the 40th minute, also with his head.

Sporting reasserted their dominance in the second period, but the final ball lacked right up until the 70th minute where Wendel would find Jovane at the back-post with a cross, setting up the hosts’ new-found hero for the opener on the volley.

The fight-back appeared too complicated for Santa Clara to conjure up going into the latter stages of the game, securing an important 1-0 win for Sporting going into next week’s Clássico versus Porto.

With the top three far from concluded, a win at home for Sporting added to Braga’s need to defeat Paços de Ferreira at the Mata Real in their bid to close the gap between the two back to three points.

As so often has been the case, Paulinho was on hand to offer his side a quick start in the third minute of the game, winning a penalty before converting from the spot himself.

A handball inside the box offered Paulinho the chance to grab a second from the 12-yard mark, taken by the Portuguese forward in the 34th minute before a big mistake at the back from Paços in the 38th minute set the Braga man up for his first career hat-trick, making it 3-0 before the interval.

Another rapid start from the visitors deepened Paços’ troubles in the 47th minute, with Paulinho this time taking up the role of provider to set Ricardo Horta for his 10th league goal of the season, picking his spot with a first-time finish inside the box.

Uilton clawed a goal back from a tight angle in the 78th minute, with only the crossbar denying Marco Baixinho from doing the same late on. In a bitter blow to the hosts' efforts, Galeno concluded a disappointing night for the Castores with Braga’s fifth of the night, making it 5-1 at full-time.