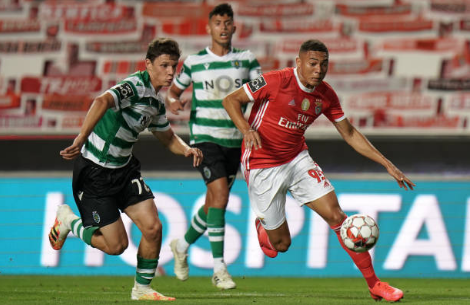 Sporting have fallen into fourth place on the final day of the season after a 2-1 loss to Benfica at the Estádio da Luz opened up a route for Braga to claim a top-three finish, defeating Porto 2-1 at home.

With both sides in action simultaneously, Benfica placed their rival in a spot of bother when scoring late through Carlos Vinícius to clinch a 2-1 win at home to the Lions, as Braga faced off against the newly-crowned Primeira Liga champions, Porto.

The loss left the Lions vulnerable after the Arsenalistas turned a 1-0 deficit into a 2-1 turnaround at the Estadio Municipal de Braga, consequently overtaking Sporting and sealing an automatic route to next season’s Europa League group stages.

Elsewhere, Rio Ave completed the Primeira Liga’s top five in the ever-evolving tussle for the final qualifying spot for Europa League football, taking advantage of FC Famalicão’s 3-3 draw to Marítimo to leapfrog the former with a 2-0 win against Boavista. Here’s how the story unfolded on a action-packed final day at the top of the table.

A positive result would rubber-stamp Sporting’s presence on the Primeira Liga podium, subsequently qualifying the Lions automatically for the Europa League, but Rubén Amorim’s men would have to go out and hunt for such a reward in none other than his old home, the Estádio da Luz, in the final Clássico of the season versus Benfica.

Sporting started positively but a 10th minute chance claimed by Pizzi, struck low prior to Luis Maximiano’s save with his leg, began to turn the screw in Benfica’s favour.

In the 28th minute, Haris Seferovic made full use of the Eagles’ ascendancy, as well as Rubén Dias’, when nodding in the defender’s knock-down and giving the hosts a 1-0 lead.

Emerging after 60 minutes, second-half substitute Tiago Tomás came close to leaving his mark on the derby following a complete miss-kick from Jardel, enabling the young striker to turn and take aim before hitting the near post.

The role of provider suited Tomás better in the 68th minute, setting Andraž Sporar through on goal before the latter could power an effort through Odisseas Vlachodimos’ legs and make it 1-1.

With Braga leading against Porto, Sporting were dipped into a whole host of trouble in the 88th minute after Vinícius’ volley inside the box, confirmed as legal by VAR, placed Benfica back in front. Left without an answer, the loss means Sporting, in fourth, will now have to enter the Europa League via the qualifiers.

Braga, three points behind Sporting, may have looked like needing a mini miracle in order to finish third when hostingPorto, but it was the type of miracle, with the fixtures on show, that the last day of the season could easily conjure up.

The champions weren’t about to facilitate things for the Arsenalistas, however, taking an early lead through Matheus Uribe’s close-range finish that preceded an ugly-looking twist of the knee, forcing the Colombian midfielder off.

It wasn’t until the second half that Braga were able to bite back fully, taking advantage of a decisive deflection to claw a goal back via Ricardo Horta’s edge-of-the-area strike, 54 minutes in.

Diogo Costa’s anticipation was key in denying Fransérgio a route to Braga’s second, with the post denying the Brazilian just five minutes later, but it would be third-time-lucky for the midfielder several yards closer to the goal, drilling low to place the hosts 2-1 up.

Despite an initial dampener from Sporar coming from Lisbon, Vinícius late goal for Benfica elevated the mood back at the Estádio Municipal de Braga, with the hosts finding the energy to hold onto a 2-1 victory and take third place for themselves.

After a dream season fresh from promotion to the top of the Portuguese footballing pyramid, Famalicão’s season balanced itself on the right kind of result away to Marítimo, with Rio Ave just behind them in the table.

The Madeira outfit pulled ahead early through Zainadine’s free-kick, with only the post denying Pedro Gonçalves from issuing the perfect response for the visitors in the 6th minute, prior to Fabio Martins’ equaliser from the penalty spot.

Marítimo picked up quickly to score through Rene Santos just three minutes into the restart, with Famalicão having to wait until the 87th minute to find a second equaliser, through Roderick Miranda’s header.

Rubén Lameiras, with an accurate shot from a tight angle, thought he’d taken Famalicão to the promised land in the 91st minute as they led for the first time in the game, five minutes from the final whistle, but the dream was mercilessly ripped from the Europa League hopefuls’ grasp in the final minute, with Erivaldo’s goal clinching a 3-3 draw and setting the path for Rio Ave to cross.

A win for Carlos Carvalhal’s side would place them on 55 points for the season, a new club record, but Rio Ave had eyes on loftier ambitions, requiring a slip-up from Famalicão in order to crash into the top five and occupy the final spot for Europa League qualification.

After 17 minutes of play, Mehdi Taremi was blessed with the opportunity to pick his spot and give Rio Ave the lead away from home, with the Iran international not disappointing when aiming low into the bottom-right corner.

Taremi’s goal led both sides into the second half with the score at 1-0, leaving them to fight tooth and nail for crucial second goal of the afternoon.

At a time where results elsewhere worked in the Vilacondenses’ favour, a howler from the Boavista backline handed Taremi his second goal on a platter, enabling the striker to simply round the keeper and roll the ball in effortlessly for 2-0.

Famalicão threatened to keep ahold of fifth place when taking a late 3-2 lead before Marítimo’s 95th minute equaliser reinstated Rio Ave’s celebrations back at the Bessa, completing the top five.