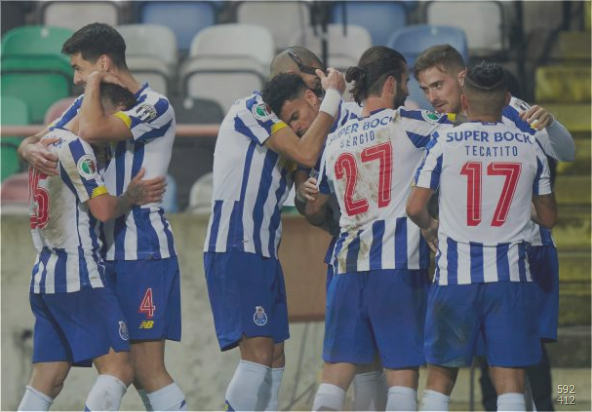 FC Porto have claimed their 22nd Portuguese Super Cup title after a first-half Sérgio Oliveira penalty and a late grab from Luis Díaz secured a 2-0 victory against Benfica in the Estádio Municipal de Aveiro, tonight.

In a game between last season’s first and second-placed Primeira Liga outfits, a VAR-awarded Oliveira spot-kick broke the deadlock in a tense affair between bitter rivals.

The Eagles almost clawed their way back into the game late on via an Alex Grimaldo free-kick, crashing against the woodwork, before Luis Díaz dealt Benfica a killer blow with a late goal to double Porto’s advantage and pick up the first bit of silverware of the season.

For the rescheduled curtain-raiser, Jorge Jesus had to contend without Pizzi and Gabriel in the centre of the park, deputised by Adel Taarabt and Julian Weigl, against a full-strength Porto outfit.

After a cagey start to proceedings, the Dragons benefited from a hint of controversy in their bid break the deadlock, winning a penalty through Mehdi Taremi after VAR judged an offside Moussa Marega to have played no part in the decisive attack.

A specialist from the spot as of late, Sérgio Oliveira collected the ball from the 12-yard-mark moments before sending Odisseas Vlachodimos the wrong way and giving Porto the lead in the 22nd minute.

At the other end, a cute lob from Gian-Luca Waldschmidt left Grimaldo close to snatching a goal back, denied only by Augustin Marchesin’s finger-tip save to divert a volley across goal on the half-hour mark.

A more pragmatic approach from Porto ensured little else from an uninspired Benfica in the final third, dragging the game into the interval with a 1-0 score-line.

Grimaldo had another match-up against Marchesin in the 59th minute, angling a free-kick heading for the top-left corner that would be met by the Argentine shot-stopper.

The alarm bells rang for the Eagles’ backline in the 73rd minute, requiring an important save from Vlachodimos and two important interventions from Nicolas Otamendi and Gilberto to stop Chancel Mbemba and Marega from doubling Porto’s lead.

With the heroics at the back, Benfica maintained hope that they could re-enter the dispute for the super cup, as Grimaldo hovered over another free-kick in the 85th minute. His strike rooted Marchesin to his spot with a well-placed delivery that was derailed only by the crossbar.

As Jesus' men edged themselves closer to a dramatic finish to the game, Luis Díaz took the wind out of the Lisbon outfit’s sails with a smart finish from an acute angle in the 90th minute, rubber-stamping Porto as the champions of the 2020/21 Portuguese Super Cup.