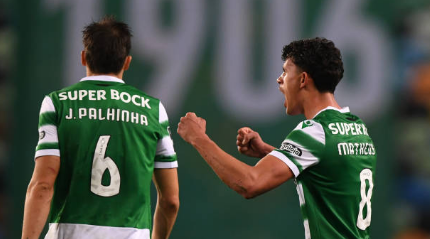 Sporting have strengthened their hold of first place with a dramatic 1-0 victory against Benfica in the Lisbon Derby, secured late on at the Alvalade by a Matheus Nunes header.

The two outfits went head-to-head in the capital in an important night in the tussle for the Primeira Liga title, following on from FC Porto’s 2-0 victory against Rio Ave, earlier in the night.

As the Lisbon pair wore each other out en route to an anticipated 0-0 score-line, an 11th-hour header from Matheus Nunes, starting ahead of the ever-present João Palhinha in the Derby, pinched all three points for Sporting and Rúben Amorim, triumphant against his former club and creating a nine-point-gap between the two sides.

After appealing his suspension, Sporting were able to name mainstay Palhinha on the bench for the ‘Derby Eterno’, meanwhile the big surprise from the visitors, without manager Jorge Jesus present, came with the implementation of a Benfica back five, mirroring Sporting’s formation.

The Eagles were forced into amending their strategy early, however, as Jardel, slotting in between Nicolás Otamendi and Jan Vertonghen at the back, picked up an early injury in the 10th minute before being replaced by Gabriel.

Both clubs struggled to break out of the big game’s cagey characteristics, with Pizzi registering Benfica’s first chance with a shot into the side-netting prior to Tiago Tomás’ one-on-one opportunity in the 23rd minute, called offside at the other end.

Pedro Porro came close to offering the visitors’ goal a serious threat with a shot from the edge of the box, deflected over by Julian Weigl for a Sporting corner in the 34th minute.

With just five minutes of the half to go, Luis Neto gave us an opportunity to remember the first period by, attacking Tiago Tomás’ flick-on with a header back across goal, roaming just wide of Odisseas Vlachodimos’ far post.

The two outfits carried a goalless draw into the half-time interval before a fierce strike from a tight angle from Darwin got us underway in the second period, stinging the palms of Antonio Adan and promising a more active half of football.

No less than a minute later, Tiago Tomás was sent racing down the right channel before feeding Pedro Gonçalves with a back-heel, but Weigl was again on hand to deny the Sporting man with a crucial block.

As Jovane Cabral and Pedro Gonçalves tried to force their way through Benfica’s backline, a Gilberto intervention almost found its way past his own keeper Vlachodimos, palming away the Brazilian full-back’s efforts in the 75th minute.

My on-the-whistle video report from Alvalade after Sporting 1-0 Benfica. pic.twitter.com/pHeg3azkBY

The Lions edged themselves closer to the game’s first goal in the 79th minute, with the ball falling perfectly for Palhinha, on for João Mário, before thrashing a volley at goal from the edge of the box that skipped just wide of the mark.

Just as the powers began to wane at both ends, Matheus Nunes was on hand to deliver what would ultimately turn out to be the winner in the 92nd minute, taking advantage of a frail Vlachodimos punch.

In his attempts to deal with a flurry of Sporting crosses, the Greek goalkeeper’s clearance fell kindly for Matheus to nod into an empty net, securing the Green & Whites’ first victory at home against their cross-city rivals since 2012.