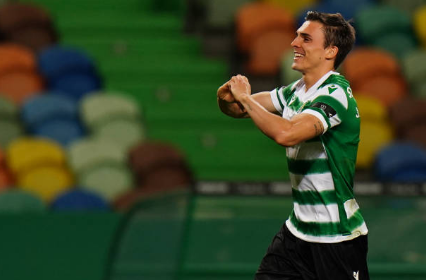 Sporting have increased their lead at the top of the Primeira Liga table after combining a 2-0 victory at home to Paços de Ferreira, this Monday, with FC Porto’s draw at home to Boavista over the weekend.

The Dragons, two goals down by half-time, produced a second-half fightback against rivals Boavista but, with a missed penalty and a VAR decision in the mix, Sérgio Conceição’s men were unable to stretch beyond a 2-2 draw and leave a couple of points at Sporting’s mercy.

The Lisbon outfit took advantage with a goal in each half of the game from João Mário and midfield pivot João Palhinha, taking their lead over Porto into double figures for the league.

Benfica were no better than their northern rivals in their travels to Moreira de Conégos, despite taking the lead early versus Moreirense before a 40th minute penalty from Yan Matheus left them braced for a 1-1 stalemate.

The draw enabled Braga to go two points clear of fourth-placed Benfica after a narrow 1-0 victory away to Santa Clara, leaving them just one point behind second place.

With Porto in danger of allowing table-topping Sporting to sail away into the distance, the Dragons were matched up with local rivals Boavista in their bid to keep apace with the Lions.

Jackson Porozo took just eight minutes to place the Black Panthers ahead, however, attacking a corner at the near post and heading an effort past Augustin Marchesín. Boavista followed up Porozo’s header with a goal from Alberth Elis, set up by an accurate Ricardo Mangas cross, as the visitors took a 2-0 lead into the second half.

Just eight minutes into the second half, Porto initiated their comeback with a heavily-deflected effort from Mehdi Taremi finding its way into the back of the net.

Sérgio Oliveira levelled the score from the spot as late as the 82nd minute and, with Francisco Conceição, the son of current manager Sérgio, already on the pitch, the Porto skipper almost completed the turnaround standing over the 12-yard-mark again within the final ten minutes before hitting the post with his attempt.

Porto were able to celebrate a third goal that initially made it 3-2 but, upon closer inspection, Evanilson’s 89th minute winner was later ruled out after a deflection off the Brazilian’s hand directed the ball goalwards, sentencing the two sides to an eventual 2-2 draw.

After back-to-back games against Porto, both resulting in a draw, Braga took to the Azores in hope of closing in on their Taça de Portugal opponents Porto, momentarily four points adrift.

The Bracarenses stormed to a 1-0 lead, courtesy of ex-Sporting full back Cristian Borja, sitting just outside the area before thundering a volley into the top-right corner in the 10th minute.

A couple of Lincoln free-kicks from crossing positions was as threatening as it got from Santa Clara, calling Matheus into action on both occasions in the second half. Borja’s early goal stood the test of time, taking Braga two points closer to second place.

After Porto’s draw, Benfica’s journey up north to take on Moreirense offered Jorge Jesus’ men, back to winning ways in their last fixture, the chance to close the gap between them and second-placed Porto to just one point, much like Braga did.

The Eagles saw a big chance go begging with a misfiring effort from Rafa Silva in the 21st minute, dragging a shot inside the box wide before Haris Seferovic showed the winger how it’s done with Benfica’s opener, just four minutes later.

Alex Grimaldo dipped the visitors in a spot of bother in the 40th minute, however, conceding a penalty for Yan Matheus to convert, taking the two sides into the interval tied at 1-1.

Courtesy of a Gian-Luca Waldschmidt cross, Darwin Nuñez almost propelled Benfica back in front with a close-range header, timing his run into the box to perfection, but Pasinato stood strong to deny the Uruguayan in the 79th minute.

The inspiration dried up at both ends of the pitch, leading the two sides out to the tune of a 1-1 draw that’ll undoubtedly suit the hosts more.

The season appears to get sweeter and sweeter for Rúben Amorim and his young Lions, readying themselves against high-flying Paços in a game that would send them ten points clear at the top of the table with a victory at Alvalade.

New boy Paulinho threatened to grab his first goal in Sporting colours with a neat flick at the near post, stopped by Jordy, but a push on Pedro Gonçalves inside the box moments later would offer the hosts a clearer route to goal in the first half.

João Mário was the man elected to take the all-important spot-kick for Sporting, making no mistake with the game’s first goal in the 20th minute.

From one João, to the next, the league leaders found themselves doubling their lead early in the second half through João Palhinha, volleying in a flick-on from the back-post in the 48th minute.

The home side then managed the threat coming from ‘the Castores’, Sporting collecting another set of three points in their charge towards the title, as they clocked up a ten-point-advantage that’s never been squandered by any team at this stage of the season.