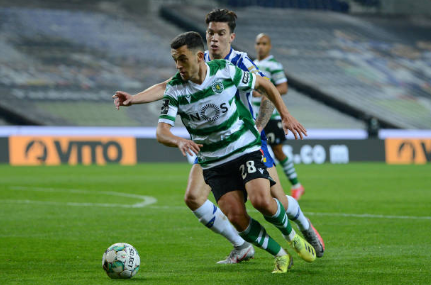 Sporting have protected their ten-point advantage at the top of the Primeira Liga after drawing 0-0 at the Estádio do Dragão with second-placed FC Porto, this Saturday.

The Dragons were hopeful of handing the league leaders their first defeat of the campaign and cutting the Lions’ advantage down to seven points, in their bid to open the title race back up.

Two good opportunities for Mehdi Taremi moved Porto closer to their aims on the night but failed to fully force through a resilient Sporting outfit, holding onto a crucial 0-0 draw away from home.

Having been crowned champions of Portugal in two out of the last three years, on top of proving an extremely strong outfit in this season’s Champions League, Porto were targetting nothing less than a win against Sporting. Several punters will go to betway and choose Porto when they bet on the UEFA Champions League after their recent victory over Juventus, but this weekend it was domestic football on the agenda and possibly a last chance for the Dragons to put themselves in a position to lift the Liga NOS title again.

Both managers presented no changes coming into the hotly-contested encounter, as Otávio held off calls for Francisco Conceição to start, meanwhile Rúben Amorim once again backed Tiago Tomás, in Paulinho’s absence, to complete Sporting’s forward line.

The two teams proved to be super well-matched in the early exchanges, trading spells of combative play before Wilson Manafá, as late as the 27th minute, produced the first half-chance of the game with a shot across goal, palmed away by Antonio Adan in the Sporting goal.

Atlético Madrid’s former goalkeeper looked to be in bigger trouble in the 33rd minute when Taremi, after a high recovery of possession from Porto, took aim at Sporting’s goal via Gonçalo Inácio’s deflection, but the latter would get enough behind his block to fully divert the ball away from danger.

Little else came between the two sides fighting tooth and nail for their fair share of possession, leading us into the break with the game locked at 0-0.

The Dragons pressed on in search of the opener a lot earlier in the second half, causing danger through Zaidu Sanusi and his left-footed strike across goal, skipping just wide of the mark in the 48th minute.

Porto edged themselves even closer to making it 1-0 in the 57th minute as Jesús Corona was picked out at the back-post before volleying the ball back into the box, only for Taremi to fluff his effort and volley wide with a miss-hit.

Sporting posed a threat on the counter with a huge investing run from Matheus Nunes, beating Otávio to the ball down the right channel before failing to get his effort on target in the 73rd minute.

Taremi continued to run into the same issues in the 76th minute, being fed this time by a cutback from Manafá before, much to the frustration of those in the home dugout, sending his shot comfortably over Adan’s goal.

A pair of wasted chances from the Iranian striker was as good as it got for the home team in the key title clash, securing a point apiece for the two outfits. Although it’s not all bets off on betway as regards Porto’s chances of winning the title, the result keeps Sporting ten points clear at the top of the table and seemingly well on course to end their long wait for a championship triumph.