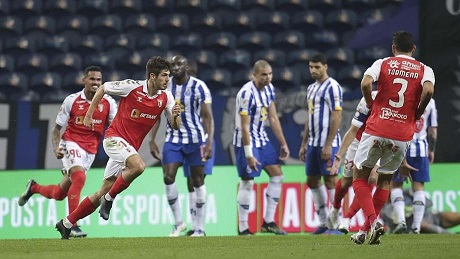 Braga are in the final of the Portuguese Cup after overcoming FC Porto in an action-packed semi-final second leg at the Estádio do Dragão last night.

The visitors raced into a 3-goal lead thanks to a brace from Abel Ruiz and a goal by Lucas Piazon, but a quick Porto reply from Otávio, followed almost immediately by a 34th-minute red card for Braga’s Cristian Borja gave the Dragons hope.

Moussa Marega pulled another goal back for Porto in the second half, but it was too late to rescue the situation and it is Braga who have booked their place in the end-of-season showpiece match.

Porto went into the match favourites to progress, not least because they were ahead in the tie thanks to the away goal they scored in the 1-1 draw in the first leg. But a devastating opening half hour of football by Carlos Carvalhal’s men tore Porto’s hopes to shreds.

A fast Braga counter-attack in the 9th minute ended with young Spanish striker Abel Ruiz hitting a first-time shot into the net, with the aid of a defection. Things got better for the away team soon afterwards as their lead was doubled thanks to another brilliantly worked goal.

Porto defender Malang Sarr was pressured into giving away possession near the touchline, a quick pass relayed the ball to Al Musrati, who cleverly played in Ricardo Horta speeding into the box. Horta showed tremendous awareness to back-heel the ball to Ruiz, who took a touch before coolly lifting the ball over Diogo Costa and into the back of the net.

The electric Ruiz almost completed a quickfire hat-trick soon afterwards with a sensational dribble from the halfway line into the heart of the Porto box, before smashing his shot onto the crossbar.

Braga did not have to wait long to score again though. Ricardo Horta won a free-kick 25 yards from goal, and Lucas Piazon stepped up to send a perfect shot into the top corner, giving Costa no chance. Less than half an hour on the clock and losing 3-0, Porto were surely dead and buried, needing to score four goals to turn it around.

To their credit, the hosts refused to give up, and Otávio soon pulled a goal back with another terrific strike. The Brazilian brought down Luis Diaz’s long looping pass expertly on his chest and fired into the corner of the net. When just a few minutes later Borja was sent off for bringing down Marega as the last defender, Porto sensed a comeback could be on the cards.

The Dragons piled forward, winning corner after corner, but Braga survived until the break to preserve their 3-1 lead as the half-time whistle blew on a breathless first forty-five minutes.

As expected, the second half was one-way traffic as Porto desperately poured forward, but some wayward finishing and excellent goal-keeping by Matheus kept Braga’s two-goal cushion intact until the 75th minute, when Marega pounced on a loose punch from the Braga goalkeeper to drill the ball into the net.

Porto now needed two goals in 15 minutes plus stoppage time. More good goalkeeping from Matheus averted the comeback, though, and Braga deservedly made it through to the final. It capped a wonderful week for the Arsenalistas, who moved up to second in the table on the weekend after clocking up a 6th win in 7 Liga NOS matches.

In stark contrast, it has been a forgettable five days for Sérgio Conceição and Porto, who all but waved goodbye to any chances of retaining their title after the 0-0 home draw against Sporting on Saturday, and now miss out on their last realistic chance of silverware in 2020/21.

Braga will learn their opponents in the Taça de Portugal final tonight, with Benfica hosting Estoril at the Estádio da Luz, defending a 3-1 lead from the first leg.

The following night Benfica completed their semi-final victory over Estoril. Goals in either half from Gonçalo Ramos and Luca Waldschmidt saw the Eagles to a comfortable 5-1 win on aggregate against the second division leaders.

The Portuguese Cup final between Braga and Benfica will take place on 23 May at a venue yet to be confirmed.