Porto knock out Juventus after epic match in Turin 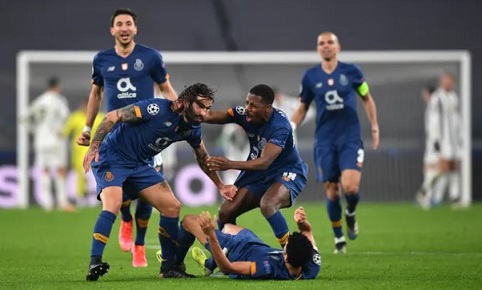 Porto produced a memorable performance in Italy tonight to knock out Juventus and make progress to the quarter-finals of the Champions League.

Leading 2-1 from the first leg, Sérgio Oliveira’s penalty in the first half seemed to have set Porto on their way to victory in the tie, as Juve now required two goals just to draw level on aggregate. But a nightmare start to the second half saw Chiesa score twice and Mehdi Taremi sent off.

Porto’s 10 men held on until extra time, and when Oliveira scored direct from a free kick in the 115th minute Porto were in dreamland. Juventus hit straight back through Rabiot to make it an incredibly nervy final few minutes, but with the commanding Pepe continuing a magnificent display at the heart of the defence, the Dragons held on for a historic night.

All-action from the off

The visitors received a boost before kick-off as Pepe, Mbemba and Corona, all injury doubts coming into the match, were fit to take their place in the starting XI.

With Porto defending a 2-1 lead from the first leg and Juventus knowing a 1-0 win would be enough to get the better of their Portuguese opponents, you could have been forgiven for thinking a cagey contest was on the cards. A thrilling start to the match put that idea to bed straight away.

In the second minute Marchesín produced the first of a series of sharp saves throughout the night to deny Morata. Almost immediately Porto surged up the field with Zaidu doing well to wriggle free of Cuadrado and cut the ball back for Taremi, whose first effort was charged down by a defender before his follow-up header hit the bar.

Porto continued to take an extremely proactive approach, looking every bit as dangerous as Juve, and were rewarded for their audacious attitude in the 19th minute. Taremi won a penalty and Sérgio Oliveira made no mistake from the spot to give Porto the lead on the night and a 3-1 lead overall in the tie.

Although Juventus began to apply more pressure as the half wore on, Porto held out in relative comfort, the indomitable Pepe winning every dual and infusing the rest of the defence with confidence as the teams went into the break with no further scoring.

But Porto’s hitherto perfect night started to go badly wrong in a torrid spell early in the second half. First the irrepressible Federico Chiesa, who had scored Juventus’ goal in the first leg, produced a sumptuous finish after being teed up by Ronaldo to make it 1-1. In the next five minutes Taremi picked up two yellow cards, the first for a late challenge, the second for kicking the ball away after the referee had blown the whistle, and suddenly the Dragons were up against it playing a man down.

It soon got worse as Chiesa once again proved the thorn in Porto’s side, heading in a pinpoint cross from the excellent Cuadrado to level things up on aggregate, 3-3. With around half an hour left, all the momentum on their side and a man advantage, Juventus appeared well set to complete the turnaround.

Porto had other ideas, though, and soaked up the pressure heroically. Pepe continued to impress, as did his centre-back partner Mbemba, and when Juventus did break through, the athletic and alert Marchesín was on hand to thwart the Italian waves of attacks.

Perhaps the key to Porto’s survival though was their bravery in refusing to settle on a wholly defensive approach. Frequent breakaways caused problems for the Juventus back line, with substitute Luis Díaz lively and the willing workaholic Marega coming close with a clever shot into the side-netting.

In the final moments of normal time Cuadrado was unlucky not to win it for Juventus when his terrific angled shot crashed back off the crossbar. Shortly afterwards the referee blew his whistle to signal extra time.

Again Porto showed remarkable heart and courage as they took the game to Juventus whenever having the opportunity to do so. One such attack brought rich rewards when Sérgio Oliveira won a free kick 25 yards from goal five minutes from the end of extra time. Oliveira himself stepped up and rifled a firm shot intelligently under the wall into the corner of the net, with the scrambling Szczesney unable to keep it out, sparking wild celebrations among the whole Porto contingent. 2-2 on the night. 4-3 to Porto on aggregate.

The drama was not over yet though, as Rabiot powered a header into the top corner. Juventus were again one goal from going ahead in the tie, and poured forward for what seemed like a never-ending period of stoppage time.

The sight of captain Pepe producing an overhead kick to clear the ball in the 124th minute of the match personified the heroic nature of Porto’s victory. Moments later the referee blew his whistle for the last time to bring the curtain down on a night that will be recalled fondly for years to come by Porto fans.

“This is the true DNA of Porto,” said coach Sérgio Conceição. “The players are to be congratulated. As well as the spirit of sacrifice it was important to be intelligent. It was obvious we would have to defend against such a strong team but we always created danger at the other end.”