Sporting and Porto leave it late either side of Benfica’s third win on the spin, as Braga drop points 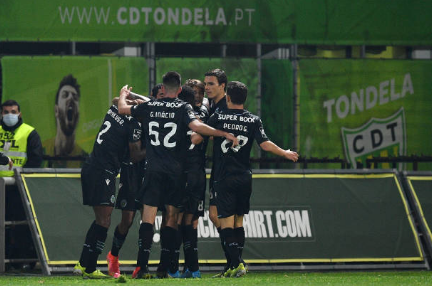 Sporting were made to wait until the 81st minute to overcome a staunch Tondela side at the Estádio João Cardoso, winning 1-0 and adding further fuel to their Primeira Liga title charge.

The Lions looked short of inspiration away from home before Tiago Tomás, alert to a loose ball inside the box, dragged the visitors over the line with his eleventh hour finish.

FC Porto replied with a late show of their own, defeating Paços de Ferreira 2-0 at home with goals in the final 15 minutes of the game to keep the distance between them and the league leaders at ten points.

The Dragons’ victory also sees them distance themselves from fourth-placed Benfica, initially level on points with Sérgio Conceição’s men after their own 2-0 win at home to ten-man Boavista. On Monday night Braga dropped two points in a lively 2-2 draw at Famalicão. PortuGOAL rounds up all the top action.

Despite having one of the worst defensive records in the league, strong home form has seen Tondela steady the ship somewhat in mid-table, so there was hope the good times in their own patch could continue with a shock against league-leaders Sporting.

The Lisbon outfit didn’t quite look up to the task in front of them, threatening exclusively through Tiago Tomás, who’d squander a fine opportunity to head in a Pedro Porro cross in the 43rd minute.

Sporting’s craftiness was limited further in the second period, with Tondela emerging well from the break and attacking through Jhon Murillo, still with the score locked at 0-0.

It wasn’t until the 81st minute that change finally came about, initiated by Nuno Mendes’ cross in Pedro Gonçalves’ direction that was eventually snapped up by Tomás’ swipe at the ball, placing Sporting in front.

Ruben Amorim’s men held onto their slender advantage, ensuring yet another week with a healthy advantage over their title rivals at the top of the table.

Living far from the promise set out by last summer’s transfer dealings, Boavista do, at least, have rare wins against Porto and Benfica to their name, as they took to the Estádio da Luz in hope of more joy against the latter.

The enormity of the task quickly became clear, however, as Chidozie’s last-man challenge on Gian-Luca Waldschmidt left Jesualdo Ferreira’s men defending the game with just ten men, three minutes in.

A quick break-away down the by-line from Diogo Gonçalves complicated matters further for the visitors, as the young wing-back found Haris Seferovic alone inside the box for a routine tap-in in the 42nd minute.

The Swiss striker doubled Benfica’s lead in the second half, thanking Diogo Gonçalves once more for his service, supplementing a headed finish in the 52nd minute. Benfica kept things at 2-0, applying pressure on Porto ahead of their crucial clash at home to Paços de Ferreira.

Coming into Sunday’s clash on a massive Champions League high, there was little time for Porto to dwell over the heroics in Turin against Juventus after wins for both of their Lisbon-based rivals.

A less-than-satisfactory first half indicated the cup hangover may have been in full-flow, with Porto’s best opportunity arising in the 54th minute, striking the bar from Chancel Mbemba’s inaccurate cross.

Fifth-placed Paços replied with a Bruno Costa free-kick on the hour-mark, helped on by Marcelo’s header before Augustin Marchesín stood to deny the ex-Sporting and Rio Ave defender from breaking the deadlock.

At the other end, another Brazilian-born centre back did as Pepe reached to glance in the opener from a corner in the 76th minute.

No less than a minute later, Porto were two goals up after a big error from Jordi between the sticks, palming Sérgio Oliveira’s powerful strike up into the air and witnessing the ball float behind him and into the back of the net to clinch a 2-0 victory for the Dragons.

New Famalicão coach Ivo Vieira had an immediate effect as the struggling club gained a precious point towards their relegation battle after a highly entertaining encounter against neighbours Braga.

Famalicão had scored only one goal in their previous six matches under the hapless Silas, but 18 minutes in and they were leading against high-flying Braga thanks to Anderson taking advantage of a goalmouth scramble to fire into the net from close range.

Braga drew level in controversial circumstances when Ricardo Horta’s obvious dive somehow fooled both the referee and the VAR, with the same player picking himself up to score the resulting penalty.

The turnaround was complete before half time as Al Musrati scored from close range. Famalicão came back strongly in the second half, though, earning a well-deserved point thanks to the goal of night – a brilliant curling effort into the roof of the net by Heriberto Tavares.