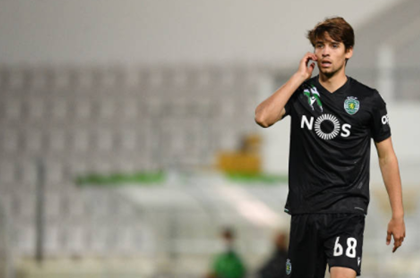 Sporting have seen their advantage at the top of the Primeira Liga table cut down to eight points after a 90th-minute equaliser saw Moreirense pinch a point against the league leaders, this Monday.

The Lions saw Paulinho’s first goal in Sporting colours cancelled out by a late strike from Walterson, enabling Moreirense to draw 1-1 and offer the table-toppers a fresh setback in the hunt for the league title.

Sergio Conceição’s men had initially put the pressure on Rúben Amorim’s outfit with a 2-1 win at home to Santa Clara, attained only thanks to a 95th-minute Toni Martinez winner.

In Lisbon, Benfica claimed all three points against Maritímo with a 1-0 victory, whereas Braga, with greater difficulties out against Farense, made it a clean sweep for those directly behind Sporting in the top four with a 2-1 triumph away from home.

Into the final ten games of the season, Porto resumed their busy schedule with a home contest against Santa Clara on Saturday night, with the Dragons keen to maintain the pressure on Sporting while keeping Benfica and Braga at bay.

A disallowed goal for Santa Clara’s Carlos Junior was as exciting as things got in a slow burner, with a Sérgio Oliveira penalty coming into the second period, won by Mehdi Taremi in the 49th minute, eventually altering the score in Porto’s favour.

Carlos did the same from the spot for the visitors in the 55th minute, however, levelling the game for the Azorean outfit after a foul on Lincoln.

In the 83rd minute, Taremi looked to have wasted the best opportunity Porto would get to propel themselves back in front as the Iranian failed to get significant contact in reception of Jesús Corona’s delivery.

Corona supplied the hosts with a final bit of craftiness in the last minute of the game and it was only then that Porto found themselves back in front, nicking all three points with a Toni Martinez header into the bottom corner.

After their defeat to Benfica in the previous fixture, Braga were looking to return to winning ways against a Farense side hopeful of dragging themselves out of the relegation zone.

Despite a positive start from the hosts, it was Braga who found themselves a goal up on the half-hour mark after Ali Al Musrati’s header from João Novais’ corner. Farense bit back from a set-piece of their own, equalising just four minutes later through Pedro Henrique, also nodding in at the back post.

A well-worked move from the Arsenalistas almost found the finish it deserved five minutes before the break, with a pull-back, aimed at Ricardo Horta, being fired wide by the Braga winger.

Farense continued to measure themselves up against Carlos Carvalhal’s men, however, being denied by an imperious Matheus between the sticks late on after a couple of efforts from Lucca and Pedro Henrique.

In a cruel blow to the Lions from Faro, Andraž Sporar nabbed a winner for Braga, against the current of play, with an eventual tap-in from Galeno’s cross.

With Braga winning against Farense and Porto home and dry after their test versus Santa Clara, only a win would suffice for Benfica, hosting 17th-placed Marítimo. Waldschmidt placed the Eagles in front in the 21st minute after Rafa Silva was fouled inside the box, taking Jorge Jesus men through to half-time with the slender advantage.

Nicolás Otamendi missed a great opportunity to double the Eagles' lead in the 54th minute with a shot wide from point-blank range, whereas at the other end, Maritímo’s Carlos Winck had better accuracy behind his attempt, but not enough to take it away from Helton Leite.

The wait for the game’s next goal become an anxious one as Benfica wasted two grand opportunities to tuck home a second when one-on-one with Amir, missed first by Haris Seferovic in the 62nd minute before Chiquinho’s failed efforts later on in the night.

Waldschmidt’s early spot-kick was enough to bag three points for Benfica, however, moving back above Braga and reinstating a three-point-gap behind second-placed Porto.

The eyes were back on the prize in Portugal with Sporting’s travels up to Moreira de Conégos, where Moreirense aimed to complicate their hunt for the Primeira Liga title. Sporting eased the nerves with a highly-anticipated goal from winter reinforcement Paulinho, scoring his first for his new club after a cross from Daniel Bragança.

The former Braga man was off celebrating a second moments prior to the interval before a Pedro Gonçalves offside in the build-up spoiled the striker’s fun, keeping the score at 1-0 going into break.

In the second half, it was Pedro Gonçalves’ turn to pick up the role of goalscorer, again arising from an irregular position and seeing another goal, in the 58th minute, chalked off for offside.

Moreirense had better luck against the offside trap and, unfortunately for the visitors, it came as late as the 90th minute, as Abdu Conte’s cross-field ball found its way to Walterson, with space to cut in on his left foot and beat Antonio Adan from range.

The hosts’ late strike was enough to earn them a big point, offering those trailing Sporting a fresh glimmer of hope of catching the Lions.