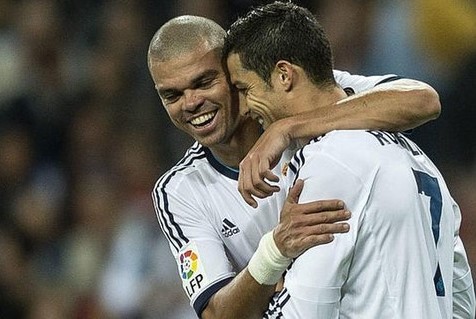 “I felt ashamed to hear a coach speak like that,” said Pepe in the wake of Jesus’s comments last week that Eustáquio had deliberately tried to injure Benfica midfielder Julian Weigl. Jesus went on to say that the president of Paços should have fined his player for the tackle, which earned him a straight red card after a VAR review.

Pepe saw the incident differently. “Why didn’t he [Jorge Jesus] talk when his players stamped on (Jesús) Corona? When we played against him they said, ‘This is the Benfica we want, aggressive, aggressive.’ And the coach who himself talked about being aggressive now comes out and talks about Eustáquio… in a play in which he tried to play the ball, but unfortunately caught the Benfica player. We players do not go out to injure a fellow professional footballer.

“I think they were regretful declarations from someone who understands football and then comes out with these kinds of comments. We players work hard to help our team play our game; we are not told to go out on the pitch and slap around, injure or hurt the opponent.”

Pepe’s brilliant career has been further embellished this season, with his performances in the Champions League earning him rave reviews all around Europe. The 38-year-old puts a lot of the success down to Sérgio Conceição, and says he would like the Porto coach to remain at the club.

“Of course I’d like Conceição to say. I’ve told him and he knows I really want him to say, but he has his ambitions and we have to respect that. In the last four years while he has been at FC Porto he’s set the bar very high. We can only thank our coach because the demands he puts on us players makes us more demanding of ourselves too.

“I would have liked to have worked with him a bit younger, when I was 28, 29 years old, in my prime. The way he works, we train as if it is a game and I can only enjoy the football and get some rest during matches [laughs], because the training is more demanding than the actual games! He’s very demanding and that is why FC Porto have won two championships since he’s been here and are very consistent all season long. It’s down to our coach who is very demanding of us.”

Staying on the topic of coaches, during his Real Madrid days Pepe was reported to have had a high-profile bust-up with the then coach of the Merengues, José Mourinho, in relation to the dropping of goalkeeper Iker Casillas, but the defender was keen to set the record straight.

“I have no problem with José Mourinho. I’ve spoken to him since that happened and it’s all cleared up. At the time I didn’t go against the coach, against my coach. When I spoke to the media I asked for respect for a teammate of mine [Iker Casillas].

“I was very clear in reminding people that Iker had a brutal history at Real Madrid; he’d won the World Cup, won the European Championship, was captain of Spain, was captain of Real Madrid. Why was he the subject of so much criticism? I wanted to defend a teammate; it wasn’t a question of going against my coach.

“Perhaps I chose the wrong time to speak because the two were at loggerheads. I only asked for respect for Iker as a teammate and a fellow professional footballer. I still think it was unfair what happened to him at Real Madrid, for everything he gave to football, and to be treated in that way… but that’s in the past now.”

Rumours have circulated in recent months in Portugal that Cristiano Ronaldo may be returning to Sporting to end his playing days at the club where he started his astonishing career. Pepe, a long-time teammate of Ronaldo’s at Real Madrid and for the national team and a great friend of the Portugal captain was asked for his opinion on the possibility.

“Of course I’d like him to come back to Portugal. I’m his friend, I’m a great admirer of his and I’d like him to return to Portugal. However, I have to be honest. Knowing him like I do, I don’t know if he would tolerate a lot of people talking how they do about football in Portugal.

“I want to see Cristiano happy, that’s the most important thing. And I think he is happy in Turin. He’s the top scorer in the Italian league. People criticise him and they don’t know the effort needed to score over 30 goals every year. What he does is brutal. That’s why I say he’s happy in Turin and I hope he stays there another year and gives more joy to those who love the game, and he continues to represent Portugal like he has done so well and which makes us proud of him.”