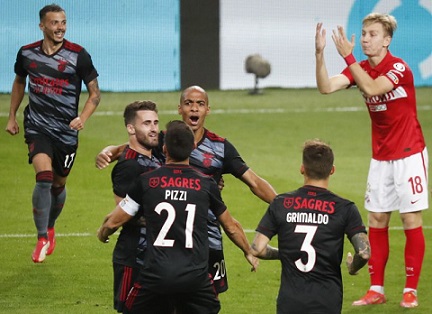 Benfica took a big step towards securing a playoff berth in this year’s Champions League with a comfortable away victory against Spartak Moscow in the first leg of the 3rd qualifying round of the competition.

Second-half goals by Rafa Silva and Gilberto without reply mean the Eagles will be defending a two-goal advantage in next week’s return leg in Lisbon. It was a fully deserved win, and with better finishing the tie could have been wrapped up at the halfway stage.

Despite playing with a back four for most of pre-season, Jorge Jesus opted to implement a three-at-the-back system, as he had used several times last season, with Jan Vertonghen, Otamendi and Lucas Veríssimo across the back line, and wingbacks Diogo Gonçalves and Grimaldo patrolling each flank, charged with both defensive and attacking duties. Weigl and João Mário were in central midfield, with Pizzi, Rafa and Seferovic offering Benfica’s attacking threat.

The game plan worked to perfection, with the Portuguese team dominating the match for the whole of the 90 minutes. João Mário proved what a key signing he could be with a man-of-the-match display, dictating the play in the middle of the park.

Weigl, wingbacks Grimaldo and Gonçalves, and Rafa Silva were also excellent as the visitors overwhelmed what turned out to be a tame Russian outfit.

Are Spartak a poor team or are Benfica building a formidable side and simply made the Russians look bad? That is a question we will soon get the answer to, with Jorge Jesus’ men facing a hectic 8-game schedule in August (provided they progress to the playoff).

“We won 2-0 but we could have left here with a 5-1 win. With VAR, it could have been different because we should have had two penalties for handball.

“Benfica played a great game, better than I was thinking for this stage of the season. It was a victory of a very confident team. Tactically the players were spectacular; we did everything we had planned. But we still have to play the second half of this tie, in Lisbon.

“I didn’t want to change things too much with new players, so only João Mário played, who is a great player and who played a great match. Weigl also played a good game, and he feels more comfortable in this system. The team was very good, both attacking and defending. I cannot say a single player of ours was poor in this match.”

The winner of the tie will play PSV Eindhoven or FC Midtjylland next, and given the Dutch side won the first leg 3-0, a PSV-Benfica playoff to reach the group stage of this season’s Champions League looks on the cards.