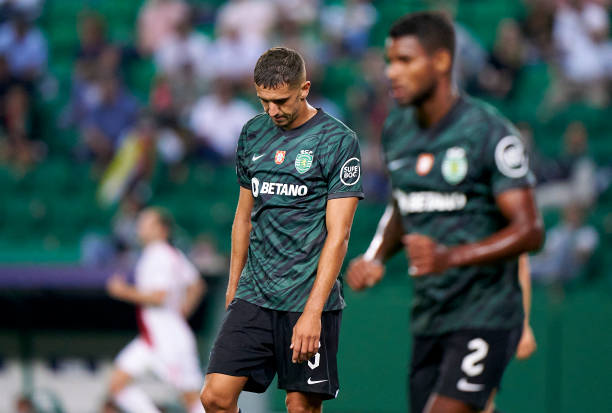 Primeira Liga champions Sporting have been rocked by defeat in their UEFA Champions League opener against Ajax, losing 5-1 at home to the Amsterdam outift, this Wednesday.

Four goals from ex-West Ham United forward Sebastian Haller and an additional first-half finish from Steven Berghuis condemned Sporting to an embarrassing start to their European campaign, leaving them bottom behind the defeated Besiktas in Group C.

In the Spanish capital of Madrid, ten-man FC Porto were unable to go beyond a point in their first Champions League outing, against Atlético de Madrid at the Wanda Metropolitano, after Mehdi Taremi was unlucky to see a goal of his chalked off for handball.

Also destined for a goalless night was Benfica, who on Tuesday held onto a goalless draw to share the spoils with Dynamo Kyiv in Ukraine. All Champions League games and matches in other competitions can be followed via the Sports168 website.

The Lions couldn’t have asked for a worse return to Champions League action after a Sebastian Haller brace left Sporting, without the likes of Sebastian Coates and Pedro Gonçalves, 2-0 down as early as the 8th minute.

Rúben Amorim’s men fought for their luck and clawed a goal back through Paulinho on the half-hour mark, but the hosts were pegged back soon after, with Steven Berghuis making it 3-1 to Ajax in the 38th minute.

Unlike the first half, Alvalade was rocking early in the second period after a blistering start that saw Paulinho nab a second with a looping header in the 47th minute, only for the tables to be turned on Sporting once more with the goal being ruled out for offside, just a couple of minutes before Haller made it 4-1 with his hat-trick.

It was Haller’s night as he upped his personal account to four and handed Sporting a shock 5-1 defeat at home, placing the Lisbon outfit bottom of Group C.

“Congratulations to Ajax; they were better than us. We have to work hard and think about the next game. We have to learn from this defeat, especially the coach. We have to look at the match and understand what went wrong.

“My team has a big heart, the players suffered a lot out there, and I’m proud of them. Despite a very harsh score-line they fought until the end. Like that, they will always have the backing of their coach. I like to say, at these times, that I’m very proud.”

A hard-fought and intense encounter was what the world expected between Atlético and Porto in Spain and the two Iberian sides offered just that in a first half of few chances.

The second period followed the same mantra until the Dragons were able to win the ball high up prior to Taremi fumbling the ball into the back of the net, as late as the 80th minute.

It wasn’t to be for Sérgio Conceição’s men, however, with VAR cancelling out Taremi’s goal after a handball from the Iranian forward in his efforts evade the goalkeeper and finish, keeping things muted at 0-0 after Chancel Mbemba's late red card for the Portuguese side.

“It’s a point gained. We wanted three, but we knew it would be a tough game given the individual and collective quality of our opponents. As expected, it was a highly competitive game.

“Atlético started strongly and dominated more in the first half. The second half was more even, and it was always us that created more danger. It was a very balanced match but perhaps the clearest goalscoring opportunities were for us.”

With some of the bigger names present in Group E, Benfica placed a great deal of importance on a victory away to Dynamo Kyiv, also keen to secure all three points in Ukraine.

Rafa Silva and Roman Yaremchuk were the danger-men for the visitors but it was Dynamo, via Mykola Shaparenko’s free-kick in the first half, who created the biggest opportunity of the opening exchanges, as the playmaker’s set-piece pinged off the bar.

There was even greater panic for Benfica to stomach in the second period after another effort found its way onto the crossbar, prior to a key save from Odisseas Vlachodimos and a fortunate Nicolás Otamendi intervention that shaved his own post to leave the Ukrainians in sheer agony.

Dynamo thought they had nicked it at the death with a back-post Shaparenko finish, but the midfielder’s goal was ruled out for offside, cementing a goalless draw between the two outfits.

“We played a great game, but didn’t manage to turn this quality into big goal-scoring opportunities, we only had one clear one, through Yaremchuk. We were in command of the game but did not make the right decisions in the finishing zones.

“Football is a sport where the team that plays better does not always win. We couldn’t score, and we almost lost in the final two minutes, with the ball hitting the woodwork and that confusion which could have ended up as a goal. But this is the Champions League and it is one point gained, not two points dropped.”