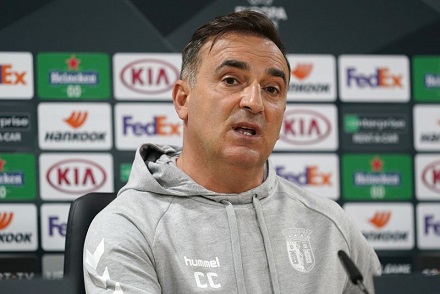 Braga began their Europa League campaign in disappointing fashion with defeat in Serbia against Crvena Zvezda.

The hosts took the lead in the 75th minute, but Braga hit straight back through Galeno, only to throw it all away with loose defending, conceding a penalty which was converted for the winner in the 84th minute.

In an even contest the Portuguese side more than held their own, taking the initiative for much of the game despite the hostile atmosphere created by the passionate home supporters.

In a match of few chances, Braga came close to breaking the deadlock midway through the second half when Lucas Mineiro’s shot deflected off the back of Ricardo Horta’s head and struck the crossbar.

Braga were unable to turn their long spells of possession into chances and Crvena began to turn up the pressure, Matheus saving well after hesitancy in the Braga defence led to a clear opening. The home team took the lead when Milan Rodic thumped in a header from a corner, but Braga produced the perfect response, Galeno seizing on a poor pass and rifling a low shot into the corner of the net from 25 yards out.

Ricardo Horta immediately fetched the ball out of the net, encouraging his side to look for the winner, but Braga were punished for passive defending in their own box and a clumsy challenge by Tormena for an obvious penalty. Aleksandar Katai made no mistake from the spot and the Serbs walked away with all three points.

“We were always the stronger team, and gave a good account of ourselves against a tough opponent on a difficult pitch in an atmosphere that is not at all easy,” said Braga coach Carlos Carvalhal.

“The players showed great attitude, but we failed in our finishing. In the Portuguese league we are the team that has the second highest number of shots, but we haven’t been scoring, and that hurt us again today. But this will change, we’re improving and now we are focusing on our next game and beating Tondela on Monday.”