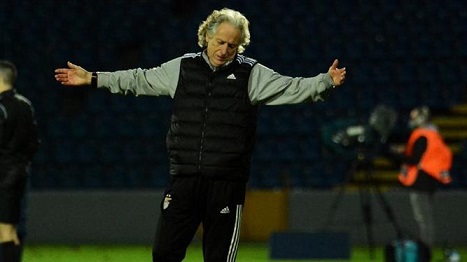 Jorge Jesus is no longer Benfica coach. After several days of speculation about his future in the wake of interest from Flamengo to reappoint him and the 3-0 defeat to Porto in the Portuguese Cup, the 67-year-old manager has parted ways with the Lisbon club – two days before the Eagles play Porto again in a crucial Primeira Liga clash.

An apparent player revolt yesterday after an altercation between club captain Pizzi and Jesus seems to have precipitated the decision, with some reports in the Portuguese media saying JJ resigned and others claiming he was sacked.

Shortly after Benfica officially confirmed the news, in a highly unusual move, club president Rui Costa and Jorge Jesus made a brief joint declaration in the press conference room at Benfica’s Seixal training complex to confirm the termination of their working relationship.

“This was not the outcome we wanted, obviously,” said Costa. “We worked hard to achieve our goals, but with the same honesty we have always had when we are together, we reached the conclusion that this [separation] is the best for both parties.”

In turn, a visibly emotional Jesus said: “I embraced this project with all my heart. I always wanted to be part of the solution, and never a problem for Benfica.”

With no questions taken from the journalists in attendance, the announcement ended with the two embracing.

Nélson Veríssimo, who had been Benfica’s B-team coach until today, has been appointed as head coach of the senior team until the end of the season.