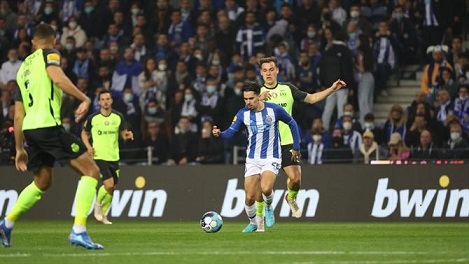 It ended in chaos with red cards galore (5 for players, more brandished for technical staff), most shown after the final whistle had blown, and unfortunately the headlines will focus on the poor discipline that the referee was incapable of controlling.

But putting the controversy surrounding the officiating and poor player behaviour to one side, there was actually a riveting game of football played. As well as full-blooded commitment, the two best teams in Portugal produced moments of brilliance in a raucous atmosphere. Four excellent goals were scored as Porto maintained their 6-point lead at the top of the table.

Paulinho and Nuno Santos put the visitors into a 2-0 lead, but Fábio Vieira halved the deficit shortly before the interval. A red card for Sporting captain Sebastián Coates upon the restart gave Porto the initiative, Mehdi Taremi equalised on 78 minutes, but 10-man Sporting held on for the draw.

Porto came out of the traps quickly, forcing Adán into two sharp saves in the opening seconds, the second a superb reaction stop to prevent Mehdi Taremi from giving the hosts an early lead.

The home team continued to play of the front foot, Pepe shooting wide, but against the run of play Sporting took the lead with a well-worked counter-attack in the 8th minute. Matheus Reis did superbly well to control a long looping cross, flick it up and without letting the ball drop dink over a pinpoint cross for Paulinho to head into the net.

Naturally, Porto only increased their pressure, swamping Sporting and keeping the Lisbon side camped in their defensive third for long periods, but whenever the Lions managed to counter they did so effectively. Nuno Santos spurned a great opportunity from just such a break, failing to connect properly with an inviting Sarabia cross, but the same combination would soon strike gold.

A wonderful sweeping move by the Portuguese champions saw the ball played from their own half deep into Porto territory, switching flanks before Reis’s cross was played back by Sarabia into the path of Santos who finished adroitly with his left foot. 2-0 Sporting.

The goal did not alter the pattern of the game, with Porto continuing to pour forward, and the increasingly involved Fábio Vieira finished a fine passing move that saw the ball worked along the top of the box with a superb first-time finish low into the corner of the net.

Tempers began to fray and referee João Pinheiro continued to distribute yellow cards like confetti. Sporting held onto their advantage as the half-time whistle blew.

Any thoughts of a calmer second half were blown out of the water in the 49th minute as Sebastán Coates brought down Evanilson as the Brazilian bore down on goal. The Sporting captain was shown a second yellow card and respective red. From that moment onwards Sporting disappeared as an attacking force.

However, like during much of the first half, Porto enjoyed the majority of the possession and attacked incessantly, but found it difficult to fashion presentable scoring opportunities, a spectacular Zaidu Sanusi volley onto the outside the post apart.

In the 78th minute Sporting’s resistance was finally broken with man-of-the-match Fábio Vieira producing a peach of a cross on the run that Taremi did well to meet with his head and direct low into the corner of the net.

Porto almost grabbed the winner twice in the closing seconds of stoppage time as first Toni Martinez then Grujic were denied by fine Adan saves.

As the final whistle blew, the underlying tension that had been brewing all match reached boiling point as a mass brawl involving all players, substitutes, coaching staff and sundry personnel broke out, with 50+ people giving it large for several minutes after the match had finished.

The exasperated referee’s successive brandishing of a handful of red cards failed to quell the commotion as almost ten minutes of mayhem seemed like it would never end before the teams were eventually separated and made their way down the tunnel.