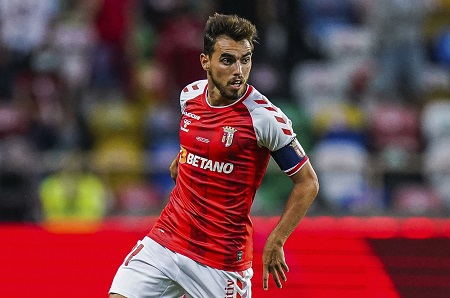 Braga overturned a 1-0 half time deficit at Estádio Municipal de Braga to snatch all three points against a stubborn Paços de Ferreira side. Antunes gave the visitors the lead on the stroke of half-time with a free kick that snuck under Braga's poorly constructed wall.

Ricardo Horta equalised in the 67th minute with a perfectly executed free kick and was on hand to convert Vítor Oliveira’s cross in the 90th minute. The victory gives Carlos Carvalhal’s side confidence before their long journey to face Sheriff in the Europa League.

Braga exerted their authority early on with the first two chances falling for Vítor ‘Vitinha’ Oliveira. He headed Iuri Medeiros’ free kick over the bar before missing a glorious chance form close range following a pinpoint cross from Yan Couto.

Paços de Ferreira had to wait until the 36th minute to fashion their first chance, Denilson running through on goal with Matheus coming off his line to smother the shot.

Holes in the wall

The visitors took the lead on the stroke of half-time against the run of play. Matchoi Djaló was taken down by André Horta, Antunes stepping up and sending a free kick through Braga’s wall and into the bottom corner.

Braga started the second half strong with Rodrigo Gomes forcing a save before his cross was cut out by from André Ferreira.

Carlos Carvalhal had seen enough in the 55th minute, deciding to make a triple substitution and switch to a back four. Bruno Rodrigues, André Horta and Iuri Medeiros made way for Leonardo Buta, André Castro and Abel Ruiz.

The hosts continued to search for an equalider and found it with a familiar goalscorer. Marco Baixinho fouled Ricardo Horta to concede a free kick, Braga's talisman stepping up and slamming the ball into the top corner from distance.

Braga were creating all the danger with Abel Ruiz looking dangerous through the middle. He couldn’t control a presentable opportunity before firing wide from a tight angle.

The introduction of Ruiz had seen Vítor Oliveira drift into wider positions and it was the 21-year-old who created Braga's winner. He surged into the box and cut the ball back towards the penalty spot, who else but Ricardo Horta on hand to bury it into the bottom corner and send the home crowd into ecstasy.

16-year-old Roger Fernandes had the final chance of the game, but was denied his third goal of the season by André Ferreira.

Ricardo at the ready

Ricardo Horta is having the best season of his career and showed why. He is Braga’s captain, main instigator and the primary driving force with and without the ball, continually creating opportunities and scoring goals.

You won’t see many better free kicks than the one he smashed home for the equaliser. When Vítor Oliveira’s ball came across the area in the 90th minute, it was fitting that Horta was on hand to put it away.

Horta understandably has the freedom to do whatever he wants on the pitch. He is indispensable to Carvalhal, his two strikes making it 16 goals and six assists in all competitions this season.

Carvalhal was quick to praise his captain after the victory: “To me he is very similar to Jota at Liverpool. He has similar skills, works for the team, is fast, scores goals, moves very well and has a good personality. I am very happy he is at Braga and I hope that he can stay for a long time because he is very influential in our dynamic.”

Abel Ruiz and Vítor Oliveira have different attributes and can develop into top quality forwards. 16-year-old Roger Fernandes will be afforded plenty of time to mature and work on his game.

19-year-old Leonardo Buta made his top flight debut as a substitute, coming on at left back as Carvalhal switched to a back four.

18-year-old Rodrigo Gomes made his first Primeira Liga start due to the absence of Nuno Sequeira and Francisco Moura. A winger by trade who has six caps for Portugal’s U19 side, he was deployed at left wing back before advancing to the left wing in the second half.

He saw his shot blocked early on and was continually trying to get behind Paços de Ferreira’s defence. He executed a beautiful pass in the 41st minute that looked to have sent Vítor Oliveira through on goal, but the linesman caught Vitinha narrowly offside.

Gomes started the second half by stinging André Ferreira’s hands with a fierce shot, before a neat 1-2 with Ricardo Horta saw his cross towards Vitinha intercepted.

Carvalhal, sometimes sounding more like an agent than a manager, is confident that Gomes will be another player to move onto bigger and better things, saying “He is the 13th youth player we have brought into the team this season, he will be another player that Braga will sell to a big club in the short to medium term, he is very competitive”.

Paços de Ferreira were unbeaten in six of their seven matches under new manager César Peixoto. Coming off four consecutive draws, perhaps they should have been more conservative in the closing stages and been satisfied with another point.

Peixoto has made them hard to beat, and despite having the second lowest goal tally this season, I expect them to pick up enough points in their final 13 matches to avoid relegation.