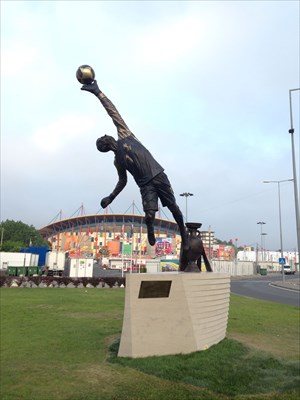 Week 8 brought us the first Clássico of the 2017/18 Liga NOS season as Sporting hosted Porto in a top-two clash at Estádio José Alvalade.

An intensely fought encounter saw honours even in a 0-0 draw, in no small part due to the performance of the Lions’ goalkeeper Rui Patrício, who is PortuGOAL’s Figure of the Week.

Rui Patrício’s abilities in goal are no secret for any Portuguese football fan and indeed those further afield. His performance in 2016’s memorable European Championship triumph in particular will live long in the memory (his display in the final against France is immortalised in a statue in his home town of Leiria, pictured) as well as numerous showings down the years in the Champions League and Europa League.

He again showed his ability to play at his highest levels when it matters most on Sunday as he helped nullify what was at times a very dangerous Porto side.

The Dragões took charge in the first half, with the attacking trident of Yacine Brahimi, Moussa Marega and Vincent Aboubakar really worrying the Sporting backline. Patrício foiled the latter in superb style in the 40th minute, rushing off his line to deny the Cameroon forward when through on goal. It was a perfectly timed interception that could easily have resulted in the concession of a penalty if fractionally mistimed. Patrício’s shot-stopping is regularly praised for good reason, but his decision-making is another key part of what makes him one of the very best goalkeepers in the country.

Patrício was eventually beaten in the 44th minute by a Marega header, only for the ball to rebound off the crossbar. However, the Seleção number 1 reacted sharply to keep Aboubakar’s follow-up effort out with his left hand and preserve parity at the break.

The key moment of the match arrived in the 79th minute though as Porto created arguably the biggest chance of the night, as substitute Otávio played in Marega for an opportunity from point-blank range but again Patrício wasn’t to be beaten, spreading himself to make a vital block to preserve not only a point for Sporting, but also their unbeaten start to the domestic season and the 2-point gap between themselves and their opponents.

By his standards Patrício had a poor game against Olympiakos in the Champions League earlier in September but his response to this has been very positive. He put in a very good display in the unfortunate narrow defeat to Barcelona last Wednesday night, denying Luis Suárez with a very good save on the night and having no blame in conceding what would prove to be the decisive, and extremely fortuitous on the Catalans’ part, own goal from Sebástien Coates.

The big matches keep coming for Patrício now as attentions turn towards the international scene, as Portugal prepare to conclude their World Cup qualifying campaign in Group B.

First they face Andorra, before a top-of-the-table showdown with Switzerland, who are presently three points clear of the European Champions. With the Sporting goalkeeper in the form he is, you wouldn’t bet against Portugal stealing top spot off their Swiss rivals and rubber-stamping their trip to Russia next summer.