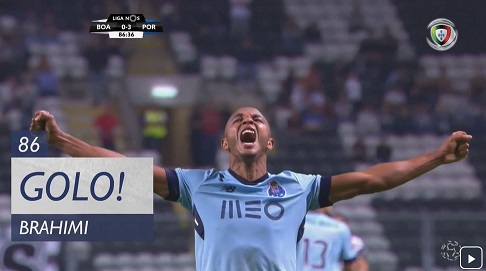 Another week in Liga NOS, another trio of wins for Portugal’s Big Three, although Lisbon sides Benfica and Sporting were run very closely in their victories over Feirense and Rio Ave respectively.

Porto made lighter work of their Invicta derby opponents Boavista to maintain their two-point lead at the top of the division.

One of the main architects of the win, as has so often been the case over the past few seasons, was Algerian winger Yacine Brahimi, who is PortuGOAL’s Figure of the Week.

It has long been common knowledge that when he is at the top of his game there are few better players in Portugal than Brahimi, his only real limitation has been attaining a level of consistency to match his frankly at times outrageous talent. While he can appear a little one-footed at times, almost exclusively using his stronger right foot, it is difficult to argue that there is a better dribbler of the ball in Liga NOS, or more exciting player to watch when in full flow.

Dribbling, progression in possession and the direct nature to his play count among Brahimi’s biggest strengths and it proves valuable for Porto time and time again. Against Boavista on Saturday he was largely stifled by Jorge Simão’s organised side in the first half, as the Panteras more than matched Porto’s intensity in a closely-fought forty-five minutes. However, early in the second period, in the blink of an eye Porto had broken the deadlock.

Brahimi escaped his marker to collect a deep cross from Jesús Corona, guiding the ball first-time on the volley across the six-yard box to give striker Vincent Aboubakar a tap-in. It was the sort of technique that was made to look incredibly simple when in reality it was far from it. Porto fans will have also been pleased with Brahimi’s passionate celebrations after the goal, displaying a commitment to the cause that has on occasion been questioned in the past.

The goal acted as a fillip for the league leaders and it quickly became apparent that the game would drift away from a tiring Boavista. These are the kinds of situations whereby Brahimi can be at his most devastating. A driving run through the midfield in the 66th minute almost brought a second goal but goalkeeper Vagner ultimately made a comfortable save.

Moussa Marega did make it 2-0 to Porto in the 80th minute, before Brahimi crowned the win with a goal that his performance deserved, being put clean through by substitute André André and keeping his cool to slot calmly past Vagner, his fourth league goal of the campaign.

One criticism that can be levelled at Brahimi is his tendency to rely on his individual brilliance, and neglect playing the simpler passes but Porto’s 3-0 win on Saturday night against their city rivals was one occasion where he seemed to strike the right balance. Few attacking players in the side, with the exception of perhaps Corona, have the ability to run at defenders with such direct efficiency so losing possession can be something of an occupational hazard, but it’s these risks that can give himself and Porto the edge in tight games against well-drilled defences.

Popular among the supporters and revered by his peers and pundits alike, as evidenced by his recent Footballer of the Year triumph at Porto’s annual Dragões de Ouro awards ceremony, there remains a glaring absence among his achievements in Portugal and that is a championship title. On current evidence he won’t have to wait long to alter that statistic.