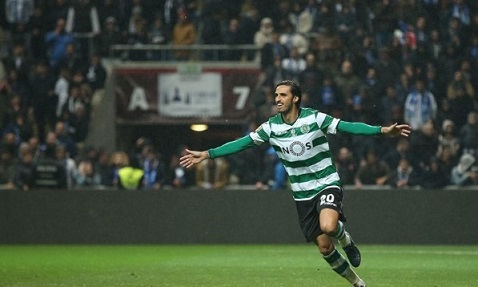 The first trophy of 2017/18 will be decided in Braga on Saturday in a Taça da Liga (Portuguese League Cup) final that will be a repeat of the first final of a competition that began ten years ago, when Vitória Setúbal beat Sporting in a penalty shootout.

It was precisely a penalty shootout that sent Sporting into the final after a hard-fought goalless draw with FC Porto tonight. Yesterday, Vitória rode their luck to win their semi-final 2-0 over second-tier Oliveirense, Gonçalo Paciência and goalkeeper Pedro Trigueira the stars of the show for José Couceiro's men.

Sporting and Porto went into the semi-final tonight - hosted as part of the Final Four phase in Braga's magnificent stadium - both still unbeaten. And that is the way it remained after an intense physical battle, with each side's defensive strength and sheer hard work all but nullifying the numerous attacking talents on the pitch.

Porto's dangerman Brahimi was well-marshalled by Sporting's back four, and although Marega made himself a real handful (playing out a terrific running battle with Fábio Coentrão) he was largely kept in areas where he could do little damage, while Porto's constant pressing shackled Bruno Fernandes and Rúben Ribeiro and didn't allow Gelson Martins to get going, even before the young winger was forced off injured at the end of the first half.

The two moments of danger in the first half involved controversy. Bas Dost appeared to be dragged down by Danilo in the box in the early stages, but neither the referee nor VAR saw it that way as the penalty appeals were turned away. Danilo's hapless evening came to a premature end soon afterwards as he slipped and pulled a muscle and had to replaced by Óliver Torres. Then in the 37th minute a well-worked counter-attack and a delightful pass by Sérgio Oliveira was neatly slotted into the net by Tiquinho Soares, sparking celebrations among the Porto fans, only for VAR to rule out the goal for offside.

Sporting had started well but Porto had enjoyed the upper hand for most of the first half and that's the way it continued after the break, with the northerners spending most of the time on the front foot, with Oliveira - despite his scarce playing time this season - proving a big influence on proceedings. Several times Porto looked close to making the breakthrough against an overworked Sporting defence, but lacked the final pass and truth be told Rui Patrício did not have too much to do, comfortable saves from an Aboubakar snapshot and a Ricardo effort after and excellent run by the full-back apart.

Casillas was also having a quiet night, although he was relieved to see a Coates header from a super Coentrão cross thud against the post and bounce into his grateful arms in the 65th minute. It would prove to be the closest either team came to winning it, the referee blowing his final whistle with the game still goalless.

Even in the shootout it was difficult to separate the sides, Patrício and Casillas both saving two of the first 5 penalties, but when Brahimi sent his effort crashing onto the post and wide, it was Bryan Ruiz who stepped up and made no mistake from the spot to trigger wild celebrations among the Sporting delegation and their fans in the stands.

In Tuesday's semi-final, played at the same venue 24 hours earlier, Oliveirense can count themselves extremely unlucky not to have become the first second-tier team to reach the Taça da Liga final. They outplayed Vitória for most of the 90 minutes, and only some poor finishing and superb goalkeeping from Vitória's Pedro Trigueira kept them from scoring.

At the other end of the pitch Vitória fabricated two chances all game, and scored both of them. Gonçalo Paciência continues to enjoy a highly positive season, and he showed sharp reactions to head into the net after following up his initial effort that had hit the woodwork. The son of the former Portugal striker Domingos then produced a lovely dribble in the dying minutes to set up the second goal for Allef and add another chapter to the Sadinos' rich cup tradition.

The final will be played on Saturday at the Quarry, with an 8.45pm kick-off. Curiously, the two teams met last week in the league with Vitória frustrating Sporting by socring a last-gasp equaliser from the penalty spot, so although Sporting will start favourites, Vitória will have high hopes of causing an upset.