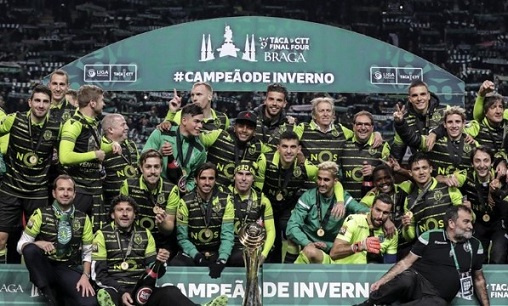 Sporting suffered a scare in the Taça da Liga final, going down early to Vitória Setúbal in Braga, before earning a victory through sheer tenacity and coming out on top in a penalty shootout. The win avenges the loss on penalties a decade ago to the same club in the very first edition of this tournament.

With the clubs sitting at the opposite ends of the league table, one could be forgiven for thinking that this would be a comfortable victory for the Lisbon giant. It was anything but.

Sporting manager Jorge Jesus made two changes from the starting squad that overcame FC Porto on penalties midweek. Bryan Ruiz and Fredy Montero came in for the injured Gelson Martins and Marcos Acuña was dropped to the bench.

On Friday in Jorge Jesus’ routine news conference before a match he was asked which player from Sporting’s opponents he feared the most and he remarked Gonçalo Paciência. And it did not take the young striker too long to justify that.

Just moments after kick-off, after Sporting failed to clear, Paciência found some room just beyond the box after a shaking off Sebastian Coates, and put one past Rui Patricio to give the Sadinos a shock lead.

Click screen below for video highlights of the match

Vitória did not sit back. Almost immediately after action resumed, Benfica loanee João Teixeira tested Patricio with a low shot, handled comfortably by the Portuguese international. In the 20th minute, off a long free-kick, Vasco Fernandes came close with a header which sailed just over the bar.

Sporting struggled to deal with the threat of Paciência who was a constant thorn in the side of the defence in the first half, winning possession several times in midfield and driving the attack forward. Just before the half-time whistle, Jorge Jesus’ club finally managed some sustained pressure, but still headed into the dressing room a goal down.

Second half changes make the difference

Jesus signalled his intent to take the game to Vitória by making two changes at half-time, pulling off Ruben Ribeiro and Bryan Ruiz, and subbing in Acuña and Rodrigo Battaglia.

But the first good opportunity of the half fell to Vitória. After Paciência forced Patricio into a save, Sporting’s defenders again failed to clear, but João Teixeira put a shot just wide of goal. But, gradually Sporting found its rhythm.

Coates, looking to redeem himself, put a header just wide. And the Leões continued to pile on the pressure.  Bas Dost forced Vitória goalkeeper Pedro Trigueira into a save just moments later. In the 63th minute came Jorge Jesus’ final roll of the dice, Seydou Doumbia replaced Montero.

In the 76th minute came a major moment in the match, amidst some frantic action in front of Trigueira’s goal, Tomás Podstawski appeared to have blocked a Bas Dost shot with his hand. After consulting VAR, match referee Rui Costa gave Sporting a penalty. Dost stepped up and converted to tie the match 1-1.

Sporting kept up the pressure, looking determined to end the match in regular time. Bruno Fernandes forced Trigueira into a save from distance. In injury time, Doumbia found Fernandes with some space to the left of Vitória’s goal but the Portuguese midfielder put it wide.

For the second time in a week, Vitória held Sporting to a 1-1 draw. This year’s Taça da Liga would be decided on penalties.

In the shootout, Podstawski completed a night to forget by putting his penalty against the crossbar. It was left to William Carvalho, who missed his attempt in the semi-final against Porto, to give Sporting the victory. He put it to the right of Trigueira with ease and the celebration was on.