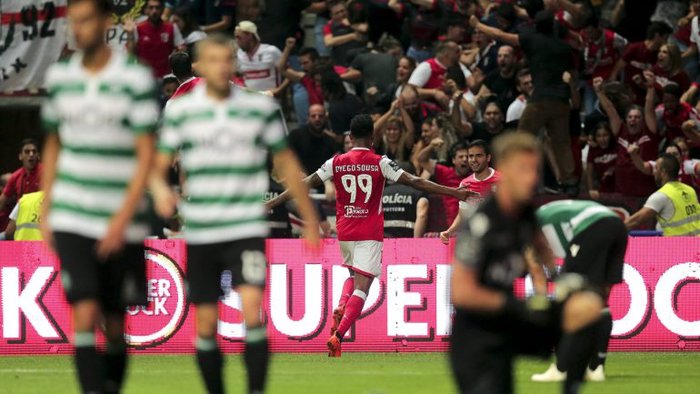 Having endured a longer break than most, the Portuguese Primeira Liga finally marked its comeback last weekend with defending champions FC Porto kicking off proceedings at the top versus Vitória de Setúbal.

The Dragons, away at the Bonfim, claimed a 2-0 victory to apply pressure on the leaders of the pack, and Benfica replicated Porto’s success to also defeat Desportivo das Aves 2-0 at home and top the table by a point.

The tie of the round came at the Estádio Municipal, where Sporting de Braga would host Sporting and eventually feed the Lions their first loss of the season, as Dyego Sousa’s second-half goal helped his side onto a narrow 1-0 win. PortuGOAL brings you up to speed with the race at the top.

In a fixture that has seen Vitória fail to register a single victory versus the Dragons, Porto took just 16 minutes to put the trend in motion through Vincent Aboubakar, picking up Maxi Pereira’s scraps inside the box to fire his side 1-0 up with a low strike.

The hosts never lost hope, however, with Valdu troubling Iker Casillas in the first half with an acrobatic effort before following that chance up with a goal shortly after the half-time interval, before the VAR stepped in to chalk it off for handball in the build-up.

With the result still on a knife edge, Sérgio Oliveira missed the chance to double Porto’s lead when one-on-one with Joel Pereira, whereas Vitória’s Frédéric Mendy, albeit from an offside position, couldn’t find the target when following up Hildeberto Pereira’s fierce strike from range.

It was from distance in the 78th minute that Porto would eventually decide the game, with Sérgio Oliveira’s free-kick catching Pereira by surprise when dipping low under his body, as a 2-0 win placed the visitors at the top of the table momentarily.

New faces, both familiar and fresh, fueled Benfica’s reception of Aves at the Estádio da Luz, as their talisman Jonas made a return to the first-team squad via the bench and 18-year-old João Félix earned his first start for the club.

Rui Vitória’s gamble on the young playmaker paid off, as Pizzi spotted Félix’s run into the box in the 33rd minute to assist the first goal of the game, courtesy of a cool finish by the highly rated teenager.

Eduardo Salvio was unlucky not to have amplified the scoreline before half-time, with the Argentine cutting in on his left foot inside the area before bending his effort onto the far post.

For all of Benfica’s dominance in the first period, Aves looked to keep Odisseas Vlachodimos busy following the restart, but the visitors’ appetite for goal was soon scribbled over by Franco Cervi’s deflected strike in the 61st minute, betraying Quentin Beunardeau between the sticks and doubling the hosts’ lead.

Only the bar denied Jardel from adding to the score in the 80th minute with a towering header, as a 2-0 victory placed Benfica in first place.

In a meet-up between Abel Ferreira and José Peseiro, once together as player and manager at Alvalade, Braga and Sporting concluded Matchday 5 in a direct tussle for the top spots.

The affair in the first period proved to be open, but one with little more than Nani’s glancing header in the 35th minute, palmed away expertly by Tiago Sá, to reflect on, as both sides remained locked at 0-0 going into the interval.

Sporting‘s Bruno Fernandes drafted the headlines in his mind in the 64th minute when being found open inside the box by Nani’s cross, but the number 8 could only graze the near-post when cutting in to angle a shot, with Raphinha also in support.

Straight up the other end, Eduardo’s low cross evaded both Sebastian Coates and Stefan Ristovski to find Dyego Sousa, who broke the deadlock with a first-time finish in the 68th minute.

The Lions would find no way through, as Raphinha came close from range before Jovane Cabral lost in his battle versus Sá late on after a tremendous run, with a 1-0 victory for Braga catapulting the northern outfit up to second place in the league table.