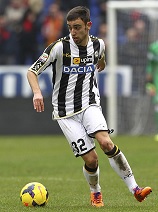 Udinese midfielder Bruno Fernandes has been conspicuous by his absence in Portugal’s all-conquering U21 team over the past couple of years, but should he maintain the superb form of his recent performances, it will become impossible to continue to overlook the 20-year-old playmaker.

The former Boavista youth player took a chance by signing for Italian lower league side Novara Calcio as a 17-year-old. The unusual career move has paid rich dividends. After impressing at Novara, he was snapped up by top-flight club Udinese in the summer of 2013, where he quickly established himself as a first-team regular despite still being a teenager.

And he has followed up his impressive first season at Udine (24 appearances, 4 goals) with more sparkling displays this season, including this wonderful goal earlier this month with a snap-shot in the 2-1 win against Inter Milan at the San Siro:

Sonja Missio is an Italian football and Udinese expert. PortuGOAL asked her for her opinion on Bruno Fernandes. This is what she had to say.

1) What are Bruno Fernandes’ main strengths?

As an attacking midfielder, he is really crucial to Udinese’s forward moving, quick-paced style of play. Udinese went under a bit of a tactical overhaul when Strama took over for Guidolin, and Bruno Fernandes is slowly finding his rhythm. His pace and his ball delivery are fantastic and will only improve as he matures. He has a lot of natural talent; he just needs to shape up a bit.

2) What are his weaknesses?

His awareness of his surroundings, especially his own team-mates needs to improve, so he can better connect and work with those around him. This will come with more practice, maturity, and experience.

He is a bit of a hothead, especially compared to a very cool Udinese side. He needs to calm down and not draw so much attention to himself. I think he has the most – or one of the most – accumulated cards this season.

Additionally, everyone wants him to be the next Udinese superstar (Sanchez, Handanovic), but he’s not quite at that level yet. He is vastly improving, but he’s not that “breakout star” that people have come to expect from Udinese and therefore people tend to be more critical of him.

3) He has been a regular for Udinese for around one season. Have you seen an improvement in his play in that time?

As mentioned earlier, he is becoming more comfortable with his position. Like most good attacking midfielders, his technique on the ball and forward play is great and complements Udinese’s style of play perfectly. His confidence is growing, but so is his poor disciplinary record and his cockiness. He needs to mature, fast.

4) Do you consider him one of Udinese's main players? What do the fans think of him?

He is not quite what you would call a “fan favourite” (i.e. Di Natale, Luis Muriel) but he’s respected in the club. Strama is favouring him due to the tactical changes he’s implemented (compared to Guidolin), but he’s still finding his stride among the veterans in the midfield. If he can stay with Udinese, I think he will make a huge impact on the club. But that’s a big if.

5) He has been compared to Rui Costa. Is such high praise an exaggeration?

Probably a bit of an exaggeration. The kid is good and has scored some beautiful goals, but I think he has a lot to learn beyond the fundamentals of the game. His passing also needs a bit more work. To be fair though, I’m not a Rui Costa expert.

6) Are there any rumours / any news about his future?

This is 100% projection and based solely on my understanding of Giampaolo Pozzo: it would not surprise me if he was sent to either Watford or Granada to help improve his leadership and to control his temper.

The positive assessment is a view backed up by FourFourTwo writer Greg Lea, another journalist who focuses his work on Italy’s Serie A.

“He’s a real livewire. Fernandes can play off a front man, or wide left. He’s a good dribbler, likes to drift inside to get on the ball too. He has a fantastic delivery and a good shot on him too,” says Lea, although he too sees room for improvement. “He sometimes holds onto the ball for too long, but that will presumably improve with age.”

A risk that paid off

Fernandes himself admits he sometimes has to pinch himself to believe his meteoric ascension. “I didn’t expect this to happen so quickly. I was at Boavista, the offer came from Novara, I took the risk and it’s going well,” he told Portuguese website Maisfutebol after scoring his first goal for Udinese.

The youngster also shows commendable humility when discussing that often-made comparison between his style of play and that of Rui Costa.

“I was first compared to Rui Costa when I was at Novara, then after moving to Udinese, when we played Fiorentina, the connection was made again. It’s good to hear, but to be honest for the moment I think it’s a lack of respect. I’ve done very little to be compared to him. I don’t think it’s fair. He was a player who I admired immensely. I just have to keep working hard so that in future years a young player can appear and say he wants to be like me.”

Fernandes has taken a route trodden by the likes of Luís Boa-Morte and Pedro Pauleta, in that he is building a solid career for himself abroad having never played in Portugal’s top flight. If he continues to progress at his current rate, he has every chance of emulating his compatriots and establishing himself as an important member of the Portugal national team for years to come.

Julio, Murillo/Canada
This comment was minimized by the moderator on the site

Wonderful, inspiring story. He made a bold move as a teenager and I'm pleased to learn it's paying off. Anytime Udinese play, I always check the game summary to see if a) he played, and b.) he scored.
Kudos to him and I hope he has a long and...

Wonderful, inspiring story. He made a bold move as a teenager and I'm pleased to learn it's paying off. Anytime Udinese play, I always check the game summary to see if a) he played, and b.) he scored.
Kudos to him and I hope he has a long and fruitful career.
Perhaps he'll make as big a mark in Serie A as Rui Costa (Fiorentina/AC Milan) and Rui Barros along with Paulo Sousa (Juventus).
Who also from Portugal played in Italy's top flight?
Luis Figo, Ricardo Quaresma and Pele (Inter),
Nuno Gomes (Fiorentina),
Miguel Veloso (Genoa),
Ricard Esteves
Those are just names off the top of my head.
Anyone else?

I am not sure I am getting the full picture from this interview. Why is he going to leave a starting role to join a 2nd tier English club or Granada where he is not guaranteed anything. That is going to regress his path, not help it at all. So the only young football player with a temper is Bruno in all of Serie A? Give me a break.

Portuguese players (and all players) often make the mistake of jumping to another club when they should stay where they are! He is 20 years old, he should stay where he is and perhaps be mentored by Di Natale or Pinzi. Actually Di Natale is a great example of someone who could of gone anywhere, but chose to remain loyal to Udinese. Totti is another example of guys who chose to stay when they could of left for cashola.

Italians are tough on their players but (imo) fair, he would do well to stay and learn. My 2 cents.

Many thanks to Sonja Missio for the insight! It is always fantastic to get these perspectives. Another reason Portugoal is the best footy site on the net.

Wow, another Portuguese #10 prospect.
I hope he stays at Udinese. Udi is a club that continuously retools to challenge for a Champions League spot every few years. It's a system that's proven profitable and to a certain degree successful....

Wow, another Portuguese #10 prospect.
I hope he stays at Udinese. Udi is a club that continuously retools to challenge for a Champions League spot every few years. It's a system that's proven profitable and to a certain degree successful. Fernandes could do a lot worse, should he choose to move. Should Udi choose to move him on, hopefully it will be on loan to mature a bit.

Read More
Ed Gomes
There are no comments posted here yet