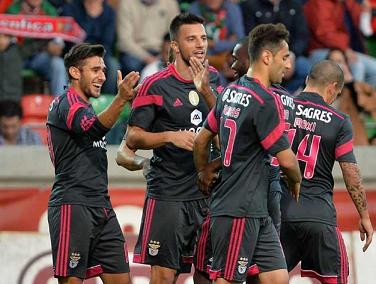 Appraisal of the Primeira Volta

The first half the Primeira Liga was completed this weekend, with a largely expected set of results.

Leaders Benfica won with surprising ease at Marítimo, hammering the islanders 4-0 in Funchal, Porto overcame atrocious conditions to win 3-1 at Penafiel and Sporting beat Rio Ave 4-2 in a thrilling match at the Alvalade.

There were also wins for Vitória Guimarães and Braga, the latter's 3-1 win at Vitória Setúbal costing Domingos Paciência his job.

Three-tier league - five of the best

The 2014/15 season has shown a marked difference between Portugal's best teams and the rest, with three, four and five-goal thrashings handed out on a far more regular basis than in seasons past.

Benfica are a case in point. Jorge Jesus's team is by no means the strongest in his 6-year reign at the Estádio da Luz. Indeed, you can make an argument that it is perhaps the weakest, as exemplified by an awful Champions League campaign.

Yet in the Liga Benfica have been almost unstoppable. On Sunday afternoon goals from Salvio (x2), Ola John and Lima gave the Eagles a 4-0 win at Marítimo. The victory meant Benfica have amassed a record points haul from the Primeira Volta (first half) of the season. One defeat, one draw and 15 wins sees the reigning champions looking down on the rest with 46 points out of a possible 51. The Lisbon club have a great chance of securing back-to-back championships for the first time in three decades.

FC Porto have done little wrong this season, and in Jackson Martínez the Dragons have the Liga's most formidable goalscorer. The Colombian netted his 14th Liga goal of season at a rainy and windswept Penafiel on Saturday night and had a hand in the other two goals scored by Herrera and the impressive Óliver.

The defeat at the Estádio do Dragão to Benfica makes all the difference. If Porto had won that game they would be joint top of the Liga, instead of trailing their bitter rivals by six points. It is unlikely Julen Lopetegui's side will drop many points in the Segunda Volta, but their problem is the same can be said for Benfica. A win at the Estádio da Luz in Week 30 is increasingly looking like the only result that can open the doors to a championship triumph for Porto.

Sporting clocked up an 8th straight win in all competitions, and their fourth in the Liga, but were made to work hard in an enthralling match against Rio Ave. Goals from Nani (penalty), Montero, João Mário and Tanaka eventually killed off the challenge of an enterprising Rio Ave team, for whom the excellent Del Valle and Hassan scored.

The Lions continue to build momentum and appear to be a club heading in the right direction after several years in the wilderness, but costly dropped points - especially at home - means a championship challenge is unlikely this season.

Vitória Guimarães bounced back from their defeat at Benfica last week with a 4-0 thumping of Académica at the Dom Afonso Henriques. Goals from Ricardo Valente, André André (penalty), Tomané and Hernâni kept the northerners on Sporting's coattails. The 34 points amassed by Vitória so far this season is a club record for the Primeira Volta. Without the financial clout of their rivals, no praise is high enough for the magnificent job Rui Vitória is doing at the club.

After a stuttering start to the season, Braga have impressed in recent months. Second-half goals from Danilo, Vernâncio and Zé Luis saw the Arsenalistas come from behind to beat Vitória Setúbal at the Estádio do Bonfim. With Sérgio Conceição continuing to bristle with passion, earning the wrath of many a referee in the process, Braga, who are the only team to have beaten Benfica this season, will likely challenge strongly for third place until the end of the season.

A batch of teams in Portugal are unable to truly compete with the top dogs, but have shown moments of quality throughout the campaign. Rio Ave certainly fit into this category, as shown by their performance at the Alvalade last night. Without the overload of games caused by their Europa League participation, the Vila do Conde side should enjoy a positive second half to the season and a strong challenge for Europa League qualification is on the cards.

The same can be said of Estoril, who like Rio Ave put up a creditable showing in Europe this season, and perhaps would be higher in the league if not for having their resources stretched by so many games. A brace from ex-Porto striker Kléber gave the Canarinhos victory on Sunday at Boavista.

Belenenses snapped out of a poor run of form with a comfortable 2-0 win at home to rock bottom Gil Vicente, thanks to first-half goals from Pelé and Deyverson. The Azuis continue to consolidate their standing back in the top flight.

A club of meagre resources, Moreirense have outperformed many wealthier rivals. A single Vitor Gomes goal was enough to earn the three points against Arouca yesterday. Coach Miguel Leal is building a fine reputation. His success this year follows his Segunda Liga coach of the year award last season for guiding Penafiel to promotion.

Nacional and Paços de Ferreira played out a five-goal thriller at the Capital do Móvel, the Madeira outfit coming out on top thanks to goals from Lucas João, Luís Aurélio and Marco Matias, with late strikes from Urreta and Cicero proving too little too late for Paços. Despite a poor recent run, Paços have frequently shown football of real quality under Paulo Fonseca this season.

Both Madeira teams Nacional and Marítimo will be disappointed with their Liga position at the half-way stage, but they have enough quality to improve in the Segunda Volta.

The final group of teams comprise clubs who are fighting solely to remain in the top flight. While it was predictable Penafiel, Arouca and Boavista would struggle to survive this season, the likes of Vitória Setúbal, Académica and Gil Vicente would certainly have hoped for a far better campaign.

The quality of football shown by these half dozen clubs has left much to be desired, and one can only shudder to imagine what would happen should they be transplanted to the top divisions of Spain, Germany or England.

I really hope Benfica slip up a little to make things more interesting down the stretch for the title. It would be nice if all three of the big three had a chance going into the final month.

William
This comment was minimized by the moderator on the site

I have an interesting point relevant to this article.

This season we had - much longed for - our Os Três Grandes with Benfica, Porto and Sporting representing Portugal in the Champions League. Porto qualified with ease, Benfica could have gone...

I have an interesting point relevant to this article.

This season we had - much longed for - our Os Três Grandes with Benfica, Porto and Sporting representing Portugal in the Champions League. Porto qualified with ease, Benfica could have gone through with some more luck and motivation, and Sporting did a heroic effort deserving of going through.

But what about the Europa League? Rio Ave and Estoril were our representatives. They were both knocked out in the group stage, all fair and square. I would agree - Estoril put in a decent fight, but the truth is, that was all they had. Imagine how different results and harvesting of coefficients would be with the likes of Braga, Vitoria and Belenenses. A solid trio not only in the Champions League, but also in the Europa League, would truly unleash the Portuguese leagues' great potential.

Now I'm not saying Rio Ave and Estoril didn't deserve to compete in Europe this season. Rather the opposite. However, Estoril and Rio Ave simply don't have the resources to stay on a competitive level in Europe. Braga, Vitoria, Belenenses and a few others do. This is simply interacting with the truth.

The point is that teams like Rio Ave, Estoril and Pacos come and go. One season they end up getting relegated, another season they qualify for the Europa League. The way I see it, Portugal need a strong, consistent trio of at least Braga and Vitoria to pick up those additional coefficients and climb even higher up the rankings.

Despite challenging Italy for a 4th at the moment - which is a fantastic achievement in itself - Portugal still has areas to improve on. And this is the area in which I see we would benefit the most from.

Read More
William
There are no comments posted here yet