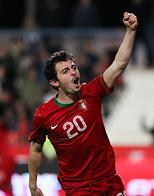 These are heady days for rising Portuguese star Bernardo Silva.

The decision by Benfica to loan the 20-year-old midfield schemer to Monaco this season upset many of the Eagles’ supporters who were convinced Silva deserved to be given a chance in the Portuguese champions’ senior team. What has happened since only backs up that opinion.

Monaco’s Portuguese coach Leonardo Jardim has not been afraid to throw Silva into action, even in the Champions League, and the Portugal U21 star has responded positively.

Speaking to French TV’s Ligue 1 Show, Silva admitted this week that: “making the jump from the Portuguese second tier to Ligue 1 and the Champions League is something really incredible. And playing alongside the likes of João Moutinho and Ricardo Carvalho, players I was used to watching on television and who are my idols, is a dream come true.”

Bernardo’s excellent form in club football in 2014/15 has been mirrored in the international arena. He played a leading role as Portugal’s U21 side clinched their place in next summer’s European Championship with a 7-4 aggregate victory over the Netherlands this past week. Silva was man-of-the-match in the first leg, which ended in a 2-0 win for the Seleção in Alkmaar, and scored a brilliant goal in Tuesday’s second leg in Paços de Ferreira.

Asked to define his playing style, Silva said “I preferring playing as an attacking midfielder, but I can also play on the flanks, especially on the right, because I’m not used to playing on the left. I love organising my team’s attacking play and providing assists.”

Silva appears to have a wise head on young shoulders. Rather than dwelling on any disappointment at failing to break into Benfica’s first team, he remarked, “leaving Portugal for the first time is a great experience and I feel really good. I’ve always wanted to live somewhere different and explore new surroundings. I’ve always loved new experiences.”

The mature attitude was evident earlier this year when Silva was earning rave reviews for his performances for Benfica B. “What I’ve managed up to now has been very good, but I’m still a nobody in football,” he told the club’s official newspaper in February.

Benfica remain his parent club, and Bernardo Silva now has the perfect opportunity to give Jorge Jesus another nudge as regards his future utility for the Portuguese giants. The Lisbon club are about to face Monaco twice in quick succession in the Champions League, the first match played in France next Wednesday 22 October.

Related: Made in Benfica, thriving elsewhere

Nelly
This comment was minimized by the moderator on the site

Who's our future #10 is it Bernardo Silva or Rony Lopes or Joao Mario?

Guest - Nelly, that's a good question, but don't forget to ad Rafa, Braga
Bruno Fernandes Udiness
JoaoTeixeira Liverpool
Portugal is very deep in MF players. Ronny lopes might have the most upside. the best passer is Bruno fernandes. He has been compared to a young Rue Costa.

Read More
Jose/Can
There are no comments posted here yet