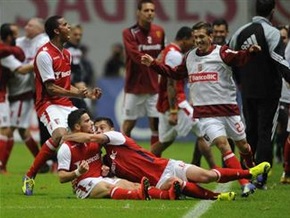 Eight weeks into the season and the 2014/15 Primeira Liga title race has got the makings of a classic. Three points separate the top four teams.

Benfica were beaten for the first time in domestic competition as Braga won an incident-packed match 2-1 at the AXA Stadium tonight.

Porto thrashed Arouca 5-0 away, Sporting continued their impressive form with a 4-2 home victory over Marítimo, and Vitória Guimarães remain in the leading pack after seeing off Vitória Setúbal 1-0 at the Bonfim.

The match of the weekend lived up to expectations. Over recent seasons Braga versus Benfica has proved a fiery and controversial encounter and the fixture tonight was no different.

The visitors had the perfect start as Talisca finished off a flowing move to put the Eagles ahead after just 90 seconds. After surviving Benfica's whirlwind opening 25 minutes without suffering further goals, Braga came back strongly.

A rapid counter-attack in the 28th minute saw Pardo slide a perfect pass to Éder, who swept the ball past Artur from the edge of the box. Both sides had loud penalty appeals turned down and several chances to score before Braga took the lead on 81 minutes as Salvador Agra fired a tremendous 20-yard shot inside Artur's near post.

There was still time for a brawl involving most of the 22 players on the pitch and the coaching staff of both teams, which resulted in a red card for Braga's Danilo. Braga's impressive goalkeeper Matheus secured all three points for the Arsenalistas with a miraculous double save in the dying seconds, thus condemning Benfica to their first Liga defeat of the season.

Porto put in arguably their finest performance of the season to destroy Arouca on Saturday night. Julen Lopetegui took what for him has been the unusual decision to pick a virtually identical team to Porto's previous match, centre-back Marcano coming in for Maicon the only change to the starting XI that beat Athletic Bilbao in midweek.

And coincidence or not, the Dragons responded in fine style, Quintero especially showing his full range of considerable skills. It was the talented Colombian who got the ball rolling, his deflected shot in the 24th minute deflecting off a defender and rocketing into the net via the underside of the bar. Jackson Martínez soon doubled the lead, after a perfect assist by Brahimi.

Casemiro, Jackson Martínez again, and Aboubakar completed the rout. Porto move to within one point of leaders Benfica.

An anarchic game at the Alvalade resulted in six goals, but it could have been far more as both sides adopted an attacking attitude while looking extremely vulnerable in defence.

Nani and João Mário were outstanding for Sporting throughout. An own goal from Bauer followed by strikes by João Mário and Paulo Oliveira put Sporting 3-0 up at half time and seemingly out of sight.

Marítimo could feel aggrieved to be three down at the break having missed several chances to score in the opening 45 minutes, but within ten minutes of the second half the islanders were right back in it as Maazou - who was a huge threat all match - netted twice in quick succession. When Sporting goalkeeper Rui Patrício watches the replays, the Portugal goalkeeper will surely feel he should have done better on both occasions.

Sporting fans' fraying nerves were allayed soon afterwards as Fredy Montero controlled a cross on his chest before producing a spectacular scissor-kick into the roof of the net.

The Lions have now scored 14 goals in their last four matches in all competitions and seem intent on fighting Benfica and Porto tooth and nail for the title.

The aptly named Vitória Guimarães coach Rui Vitória continues to do an incredible job at the Dom Afonso Henriques. Because of stringent financial restrictions, the manager has been forced to fill the team with youth players throughout his three years in charge, but has managed to put together a highly competitive side nonetheless, even lifting the club's first ever Portuguese Cup in 2012/13.

On Friday night against Vitória Setúbal the average age of the team was 23 years old, but it did not stop Guimarães from collecting another win, João Afonso's headed goal enough to bag all three points.

Paços de Ferreira and Belenenses kept their solid seasons on song with 2-1 away wins at Boavista and Estoril respectively. Gil Vicente's dreadful season is getting no better, José Mota's side falling to a 2-0 defeat at Moreirense.

Nacional da Madeira got a much needed three points. Marco Matias scored the only goal of the game against struggling Académica. The final match of the round is played on Monday night as Rio Ave host Penafiel.

YES!!! What a weekend. Porto finding their form and Benfica losing points! Great effort by the boys in blue and white. Too bad it was against a former servant in Pedro Emanuel. Sporting did a fantastic job. I really worried about them as...

YES!!! What a weekend. Porto finding their form and Benfica losing points! Great effort by the boys in blue and white. Too bad it was against a former servant in Pedro Emanuel. Sporting did a fantastic job. I really worried about them as competition this season with Marco Silva in charge, and it they're starting to prove me right. If I am objective, when they are on form, they are the scariest team to watch because they have such heart and fearlessness in attack. Kudos for fielding so many quality young Portuguese players.

Finally, I want to make a last point about Benfica/Braga and also Eder. For almost a year I have seen people here, both the newbs who think Academica is a private college in Sacramento to die-hard Seleccao vets crap on Eder like it was going out of style. Yet, every year at Braga he proves his quality. His finish today was quality and even though people complain about him not having scored for the Seleccao in 12 games, we have to put that in perspective. Only 2 of those games he was a starter, and they were in the World Cup. It's hard to score goals when you're coming on in the 85th minute into a stale line-up of Paulo Bento.

Great effort by Salvador Agra and Tiba as well. It was great work by Conceicao and his boys.

Going to be a great season fellas!

John Bent
There are no comments posted here yet