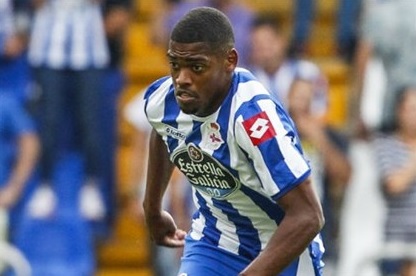 There was once a time when the ‘Big Three’ clubs in Portugal fielded squads full of promising academy players. However, the influx of foreign players over the last decade has made it more difficult for some to find playing time, forcing many to seek new opportunities abroad.

21-year-old winger Ivan Cavaleiro was first promoted to Benfica’s main squad early last season after an impressive start in the reserves. This past summer, the club loaned him to La Liga’s Deportivo La Coruña. The move caused a rift between Cavaleiro and Benfica manager Jorge Jesus.

After a relatively slow start in Spain, Cavaleiro is finally showing progress on a consistent level, but has he done enough to earn a spot at Benfica next season? PortuGoal looks at Ivan Cavaleiro.

A native of Vila Franca de Xira, a town north of Lisbon, known for its bull-running festivals in the summer, Cavaleiro began playing football with local clubs Vialonga and Alverca. He would make the switch to Benfica’s academy at the age of thirteen. In 2012, he began seeing action in the reserve squad which plays in the country’s second tier. In his first season, Cavaleiro scored an impressive 12 goals in 38 matches.

It was not long before he started making headlines with Portugal’s youth squads. In the summer of 2013, he was selected for the FIFA U-20 World Cup, making four substitute appearances before Portugal was eliminated in the round of 16. In August 2013, he had an extraordinary debut for the under-21s, scoring a hat-trick in Portugal’s 5-2 trouncing of Switzerland in a friendly.

At the beginning of the 2013/14 season, Cavaleiro returned to Benfica B where he scored seven goals in the first ten matches. Benfica manager Jorge Jesus gave the talented winger his senior debut in a Portuguese Cup match against CD Cinfães in October 2013. He had another positive debut, helping to create the game’s only goal scored by Ola John. Just days later, he came on as a second-half substitute in a Champions League match against Olympiacos.

However, he would find life at the Luz much more difficult from then on. Cavaleiro would not see much action for the rest of the season as Benfica went on to win the Primeira Liga title. He made only eight league appearances in total.

Last March, Cavaleiro made his senior Seleção debut in a friendly against Cameroon in Leiria, a match best remembered for Cristiano Ronaldo scoring twice and becoming Portugal’s all-time leading goalscorer in the process. Cavaleiro started the match and even managed an impressive assist for a goal by Fábio Coentrão, helping Portugal beat the African side 5-1. However, he did not make manager Paulo Bento’s World Cup squad.

In the summer, Cavaleiro did not factor much in Benfica’s pre-season campaign. The club decided to loan him to newly-promoted Deportivo La Coruña for one season. Cavaleiro lambasted Jorge Jesus in the media, claiming that the Benfica manager did not give him a fair opportunity to prove himself. “He did not speak to me. I think it could have been handled in a better way,” Cavaleiro said. However, he added that he would still welcome a move back to the club for next season.

The loan does appear to be paying off. Cavaleiro has seen regular playing time at Deportivo this season. He had another impressive debut, scoring a goal against Granada in the first La Liga match of the season for the club. However, he was unable to avoid a 2-1 defeat. Since the beginning of 2015, Cavaleiro has looked more comfortable on the ball. He has fully established himself as one of Víctor Fernández’s most important players. It has been enough to keep the club out of the relegation zone.

Strength, Weaknesses and Style of Play

Cavaleiro's main attributes are his speed and dribbling ability, which allow him to beat defenders one-on-one. He has a strong right foot, although his accuracy is still very much a work in progress. He has often been called upon to take set pieces for Deportivo this season and he also specialises in neat layoffs to his teammates.

He is very versatile. Cavaleiro is nominally a winger, who could play on both flanks. But he has also played as a striker for Benfica B and with the Portuguese youth squads. He is only listed at a modest 1,75m tall but he does have good upper-body strength.

In January, his skill was on full display during a La Liga match against Barcelona. Deportivo lost the match 4-0, but Cavaleiro had an entertaining duel with full-back Dani Alves in the first half. In one instance, deep inside Deportivo’s own half, Cavaleiro dispossessed Alves before chipping the ball over the Brazilian’s head. Later on, Cavaleiro dribbled past Alves and Gerard Pique before finally being taken off the ball. He was noticeably Deportivo’s best player, before being substituted at half-time due to an injury.

It is clear that Cavaleiro has adapted well to the Spanish game, but he is still a raw talent. He told Galician newspaper ‘La Opinion’ in November that the intensity of the game in La Liga is the key difference from the Portuguese game. “When I have the ball, I want to do everything at once. I need to improve and learn to play with more composure,” he added.

Like all talented young players, Cavaleiro needs to learn how to play within a system. He needs to learn when to make a pass or take a defender on. As a result, he still loses possession in good positions far too often. At no point was this more evident than early in the season when manager Víctor Fernández decided to use him as a striker. Cavaleiro struggled to get the ball in dangerous areas. In December, Cavaleiro was put back on the wing where he could help with the build-up play and create chances for his teammates. He also needs to learn how to complete his defensive responsibilities better.

His finishing has let him down on more than a few occasions this season. Still, his three La Liga goals puts him second on the club through the first 26 matches of the season, a decent total considering clubs in the lower half of La Liga do not see many scoring opportunities. If he continues to adapt well to the high level of the game in Spain, more goals will come.

Good chance at becoming a seleccao mainstay in the future, especially that almost all our wingers are pushing 30 except Nani

Cavaleiro is a player with a lot of potential and it's good to see he's been doing well lately at Deportivo. The Spanish Liga is a hugely competitive league full of quality and he will be gaining good experience there. I thought he did well in...

Cavaleiro is a player with a lot of potential and it's good to see he's been doing well lately at Deportivo. The Spanish Liga is a hugely competitive league full of quality and he will be gaining good experience there. I thought he did well in the few opportunities he got at Benfica last season, I particularly recall his awesome fake to set up Lima's winner against Juventus in the EL semi final. As such I was a little disappointed when he got loaned out in the summer as I thought this would be his breakthrough season at the club, along with Bernardo Silva and Cancelo. In the end all 3 got loaned out. In the case of Cavaleiro, perhaps it has been a good thing for him to get playing time and experience, providing he's brought back for next season. I said in another post recently, and I repeat that I hope the club don't make the same mistake they made with Gomes and Bernardo, and sell this promising young player way too early.

For the Selecao, I actually think Cavaleiro is one of two players (Tiago Bebe being the other) who I think is worth experimenting with (at least in some friendlies) at center forward. Let's face it, our age old problem of having no quality centre forwards is still totally the reality. From what I've seen of Cavaleiro and Bebe, they both seem to have the attributes required to play as a mobile pacey central striker. Considering we've got loads of options on the wing (and no real quality CFs), I really think it's worth trying one of these two (or even both) as a CF in some upcoming friendly matches.

Raw talent is a great descriptor for Cavaleiro. When Deportivo had Pizzi, Bruno Gama, Nelson O the team kind of made an impact with me so I stuck with them. So the odd game I am able to see of them, Cavaleiro is always exciting. He attacks the...

Raw talent is a great descriptor for Cavaleiro. When Deportivo had Pizzi, Bruno Gama, Nelson O the team kind of made an impact with me so I stuck with them. So the odd game I am able to see of them, Cavaleiro is always exciting. He attacks the game with almost recklessness at times. This will all settle with time and he can become a fantastic player. I think a great mentor for Cavaleiro would be Samuel Etoo. If he can focus his attack like Etoo did, his confidence will take leaps forward.

Andre - I agree on Bebe, the guy almost won the scoring title on the bottom team in our liga. Most of his goals were all over youtube and sports highlight reels. Bebe can finish, he is big, strong and very fast. From the matches I caught of Cordoba losing every week, Bebe always stands out. He has a unique style of running (head down a little too much), that is his problem. The Spanish league isn't going to help if he keeps his head down all the time. His pace and power however are outstanding, he is sooo close to a breakthrough.....Forca Bebe!! A consistent Bebe for Portugal is a scary thought for the opponents and he would be a perfect compliment to Ronaldo, as Bebe is not selfish.

The fact that he played for small, small Vialonga (MY HOMETOWN) and has come this far is incredible.

Makes him one of my favourites along with Varela, who just happens to be from where my grandparents live (ALMADA) is just awesome...get weirdly...

The fact that he played for small, small Vialonga (MY HOMETOWN) and has come this far is incredible.

Makes him one of my favourites along with Varela, who just happens to be from where my grandparents live (ALMADA) is just awesome...get weirdly proud of both of those guys when they do well.

Read More
Miggy
There are no comments posted here yet